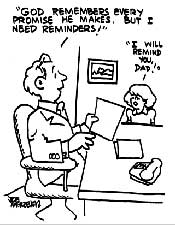 Greetings once again, all ye who would be saved! As I have mentioned previously, I am a certified minister of the totally legitimate, not even a little bogus Universal Life Church, which, as its name implies, gives its followers hope and faith in their otherwise empty and lives by having no set beliefs whatsoever. The powers granted to me by my official certificate of ministerhood are numerous and varied, and above all, highly entertaining. I can marry people, hear confessions, absolve people of their assorted sins and misdeeds, and most of all, I can go forth and spread the holy enlightened gospel of the Universal Church, which is to say, whatever I want. Obviously, this is a massive responsibility, and it's one that I take very seriously. Thousands upon thousands of years ago, when early man first saw a bolt of light flash across the sky and strike a tree, causing it to burst into flames, and his child tugged at his loinclotch and asked, "What caused that, daddy," he responded with, "Sit down and shut up, or I'll turn this car right around and we'll drive straight back to Ohio!" I kid, of course. He actually said, "It must have been some great divine being who is angry with us and our heathen ways." Well, to be completely accurate, he probably said "Unga bunga bunga," or something similarly moronic, since he was a stupid caveman. The approximate translation to modern day English would be, "How should I know? And why are you asking me, anyway? We're stupid cavemen. We don't have the proper familial structure to convince me that you're even my kid." Then he probably went back to his regular schedule of poking the ground with a stick and farting, and was summarily killed by the spreading fire. I've gotten off track a little, but the point is, we've come a long way since then. Now lightning is a recognized a scientifically rationalized occurrence and families can be conveniently scheduled and managed via personal digital assistant. And still, literally hundreds of people across the globe turn to religion for the answers to life's great mysteries. You don't approach a post as valuable as minister - one who can influence and shape the religious lens through which people view the world - with anything less than the utmost sincerity and desire to do good. But here I am anyway.

After being ordained as a minister, I did some soul searching. Sure, I was brought up in the finest Jewish tradition, but that never really provided me with the answers I needed. I was certain that there were many others out there who couldn't find solace in the "Big 3" religions (Judaism, Christianity, and Jedi). So I put together a crack team of religious scholars to help me seek out the answers to life's ultimate questions. We looked through all of the ancient texts. The Bible. The Torah. The Talmud. The Quran. The Bhagavad Gita. Tekwar. Finally, the answers came to us with the aid of intense study, soul searching, and bag after bag of psychedelic mushrooms. What we discovered may shock you. What we present to you now may well be the foundation of a new religion. Using this new information, we will now answer some of the questions that have kept mankind's greatest theological minds puzzled for ages.

Q. Okay then. What is the meaning of life? 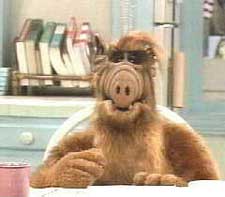 A. I'm glad you asked this right up front. The unfortunate answer is, life is meaningless. We serve no purpose of our own. You see, our universe and everything in it that we know, have known, and will ever know are all just parts of an argument between two alien superbeings who exist on a dimension tangential to our own and who communicate through the incredibly complex relaying of information to all five senses at once, plus at least three or four additional senses that haven't come up yet. All we are is the attempt of one of these creatures to explain a point to another. Each of our lives is one bulletpoint on the nearly infinite list of points that this being is using to substantiate his argument. When we die, it is simply the end of the being's explanation of that part of his argument. This argument has been going on for what we would consider millennia on such a grand scale that if we even tried to comprehend it, it would turn our brains into mush the color, flavor, and consistency of tapioca, albeit with substantially less nutritional content. Thankfully, in the entire history of existence, the superbeing has never been interrupted, except once briefly in 1989, which explains why, by all accounts, that year seemed to drag on for at least an extra hundred days, as well as why a member of the Bush family actually managed to inaugurated. Since we all serve the function of proving the points that this being is trying to make, you might argue that the meaning of life is to be true to yourself and allow your individuality to shine through, so that you might better serve as an example of whatever it is that these extradimensional creatures are discussing. That's a lovely and uplifting thought, but sadly you're dead wrong. As it turns out, the being whose mere speech is capable of spawning galaxies is actually a notoriously poor debater. As soon as he finishes, which is expected to be sometime in the next hundred years or so, it is expected that his opponent will respond with a much more sensible idea than anything that has happened thus far in our universe, and we will all be demolished in a hellstorm of logic.

Q. I see. What is the origin of the universe?

A. As best as we can figure, the whole thing started when Argnoflicon the Phylophorous got into an argument with his good friend Zellidipes the Thrombornian over a beer at their local sports bar. The precise nature of the argument is still unknown, but one thing is certain: it's end will only come about when every minute detail of philosophy, science, art, love, passion, sorrow, joy, and the very nature of life itself has been probed, investigated, and dissected. That, or closing time. Either way, we lose.

Q. Is there a heaven?

A. Well, not exactly, no. There are no pearly gates. There is no eternal bliss. There are no choirs of angels singing our everlasting reward. On the plus side, there isn't a hell, either, so you don't need to worry about having red hot pitchforks shoved up your anus. Because I know you worry about that sort of thing all the time. If you don't, just think about it for a minute or two. Believe me, you'll start worrying about it nice and quick. So the question is, what actually does happen to us when our time on this planet is up? That is to say, what happens to us when our place in the great cosmic argument is finished? It's quite simple, really. When we die, we just go to the final resting place of all ideas that were once fresh and unique, but have since become stale, worn out, unnecessary and uninteresting: the pages of MAD Magazine.

Q. So there's no hope for eternal joy?

A. No, but if you want the next best thing, just walk, run, drive, or fly to your nearest movie theater and buy yourself a ticket to "Spiderman 2!" Hot dog! What a movie!

Q. So, can you identify the exact point at which this article got away from you?

A. I'd say right about the moment I sat down to write it.

Q. When do you plan on ending this train wreck?

A. Now will be fine.