The Facinorous Fables of Groggery Gibbonman

"At age twelve, young Groggery was struck with a spinal disorder that baffled doctors. Confined to a halved keg modified with straps and pulleys, the boy would often entertain himself by writing stories about bribing a doctor to say he no longer needed the device. He sold the first of these at age 19, made his fantasy a reality, and suffered intense back pains for the rest of his life." -Ivan Camphur, The Conscience of Nonsense 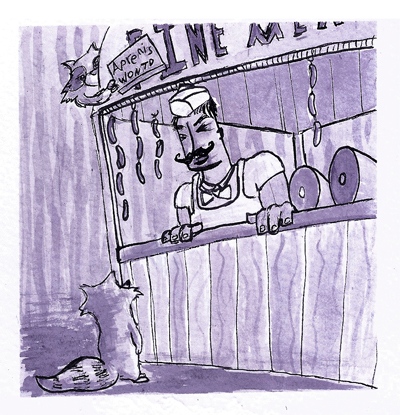 "Schnitzel!" bellowed the butcher in the town square from his great strong lungs. "Schnitzel, ham, sausages and links! The finest of meats! At a fair price methinks!"

The people came from all around to buy the butcher's wares, and how happily he wrapped their parcels in paper and string, one after the next and down the line, until a surprising patron came to the front of the queue. "Eh? What's this!?" the butcher said, and thumbed his great black mustache. For in front of him stood a small raccoon.

"Greetings, oh meatmonger!" the raccoon said with a grinny manner. "I beg your pardon, but I have come about the apprenticeship, that I may work an honest day with you!"

"Ho ho!" laughed the butcher. "An honest day from a little thief! That is quite the jest! Be gone with you, little raccoon, I have no need for an apprentice."

"Then why do you hang such a sign?" asked the raccoon, and pointed. And there it was, as he said, a sign above the butcher's shop that read "Wanted: Apprentice" in scribbled scrawl.

"What trickery!" the butcher cried as he tore the sign down from its place. "I made no such sign! And if I had, then even so, a raccoon would make for no apprentice!"

"Then why do you hang that other sign?" asked the raccoon, and again he pointed. And there it was again, a sign that read "Wanted: Raccoon Apprentice."

"Blasted lies!" the butcher yawped as he ripped the sign to pieces. "The townsfolk would not hear of such filthiness!"

"Of course we would!" interrupted the man in line behind the raccoon, who was quite clearly three raccoons stacked inside a long fisherman's coat. "In fact, we insist that you hire him right this instant!"

"Enough!" fumed the butcher, and he threw a furious punch that scattered the three raccoons every which way. "You shall not trick me so easily, little thieves!"

"Halt right there! Murderer!" cried three more raccoons piled inside in a policeman's uniform, and from its pocket they pulled a policeman's gun and shot the butcher dead.

And the townsfolk, who were each of them three raccoons in disguise, cheered, and ate sausages.

The moral of the story is: Never drop acid on the job, especially if you work with knives. 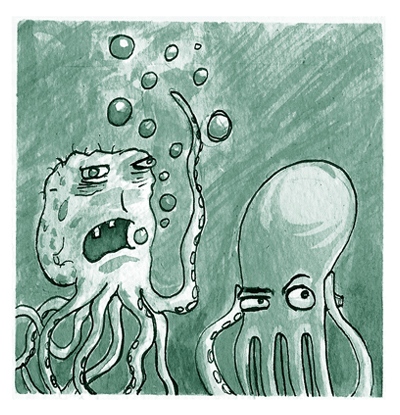 In the kingdom of Neptune, the sandy plains that stretch and shimmer forever and more at the bottom of the sea, there once lived an octopus that was old as old itself. He was known for being a wise octopus, and the younger members of his family had oft sought his council through the years.

"Idleness ..." said the old octopus to one such relative on one such occasion. "Idleness is the root of all misfortune!"

"Yes, yes, grandfather," said the young octopus with a sigh. "Don't you know any other wise things? You only ever say that one."

"IDLENESS!" the old octopus proclaimed in his creaking caw. "Idleness is the root of all misfortune!"

Young octopus rolled his eyes. "Yes, I know," he said. He massaged his temples, which ached from stress. "I have no idea how that applies to my dilemma. The lobsters have refused to sign the treaty, and if we can't ..."

And with that, old octopus fell asleep. Young octopus groaned, and took old octopus to bed, and cursed at him under his breath.

The moral of the story is: Wisdom ages like a fine milk. 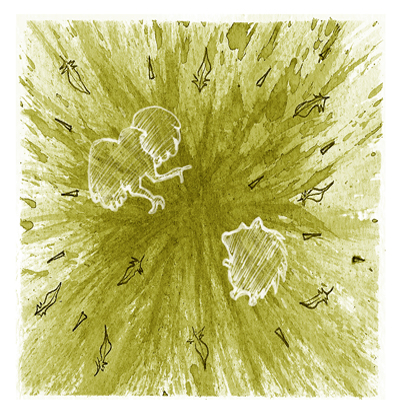 One day, out and about and merry as they please, the best of friends Hedgehog, Hawk and Dynamite were walking along a country road when they came to a fork in the way. None of the friends had traveled this road before, and by their fair and friendly nature, the decision on which path to follow fell to a vote.

"Aha!" said Hawk after some consideration, and he pointed towards the left. "I vote that we shall go left, for I believe that is the road that shall lead us to liberty and truth!"

"Hmm" muttered Hedgehog. "My vote, I'm afraid, must be that we go right. For I believe that is the road that shall lead us to prosperity and safety!"

"Yes" added Hedgehog. "It seems the decision is yours to ..."

The moral of the story is: KABOOM! Fuck two-party politics! RON PAUL!

Ian "BFM" Helm not only writes and illustrates Gibbonman's fables, he also ... I guess that's it, those two things.