Closing down the fun

For those of you not in the know, R-Lo has been toiling away on an absolutely amazing game based on everyone's least favorite asshole old man; Cliff Yablonski. This game is going to make your little Counter Strike look like that racing game they used to have at the county fair that featured transparent plastic sheets and a projected loop of a road going by.

I can say how incredibly goddamned incredible this incredibly incredible game is because I have almost nothing to do with it. My "friend" Rich made it, but I secretly hate him and hope he fails in all of his efforts, so this is REALLY high praise. CHECK IT OUT BUTTERBALL! 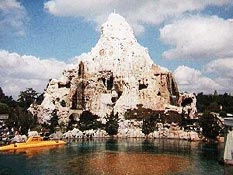 Submarine Tour Around the Sewage Pond was never a popular Disney attraction, which may explain why it hasn't been closed yet.Disney has discontinued the practice of having tour guide boat captains shoot at the animatronic hippos on their Jungle Cruise attraction, ending a long tradition that was best left whatever something is when it happens once and everyone thinks it sucks and makes fun of the guy who did it and it never happens again. This is not the first time Disney has had to "tone down" their totally "in your face" attitude because "of" prevailing political and social winds. In 1997 they got rid of some pirate on the ever-sucktacular Pirates of the Caribbean ride; I think he was doing coke off a stripper's chest or something.

In an article I read on the interweb, one helpful woman with a really stupid opinion had this to say about the recent removal of the side arms from the boat rides (which are now vulnerable to robotic hippo attacks):

"That's better," said Karla Jervis, 35, of Ohio, who rode the Jungle Cruise for the first time. "I wouldn't have taken the kids on the ride if it had guns. I don't even buy toy guns."

"I also don't let my kids look at pictures of guns in history books and if they ask me what Abraham Lincoln was killed with I tell them it was a noose," continued Karla Jervis. "I removed anything gun shaped from my house and when the kids watch TV I bang a pot with a spoon and turn the lights off and on whenever someone mentions or uses a gun."

This fiasco with Disney is just the latest in a long line of amusement park "mainstreaming", where older and less politically correct attractions are made more pleasant to the thin-skinned dopes of the 21st century. Some of these changes were pretty rational; others ruined perfectly fun rides by trying to homogenize everything into an annoyingly dull off-white pudding of dubious entertainment value. After main-lining some crystal blue I decided to put together a brief history of amusement park revisionism.

I'll be the first to admit, it was pretty depressing. I asked my dealer to cut me with his switchblade three times while working on it.

1938 - James Pretsche's Fun Times Acre - The park opened in 1880 and closed in 1938 due to pressure from liberal lawmakers, who felt a number of the attractions were racist beyond belief. The list of offending rides included The Negro Oddity Pavilion, The Slant-Eyed Monkey Rocket, and the Porch Ape Whirlwind.

1941 - Disneyland - In 1941 Disney closed its doors on the wildly popular "Hitlarium", caving into the demands of anti-nazi protestors. It was briefly renamed the "Germanarium" but this wasn't fooling anyone and by 1943 the building had been torn down.

The Atomic Fun Pusher is still alive and kicking thanks to StateOg!1950 - Cedar Point - This popular Ohio theme park was the first to shut down a ride because of prolonged health risk. In 1947 it debuted "The Atomic Fun Pusher", a ride in which a large beam composed of concentrated gamma radiation would push children across a greased floor. Children frequently complained of headaches and shortness of breath and in 1949 a six year old girl suffered from total organ liquefaction. The ride was closed for repairs but when it set five people's faces on fire the very next day it was pronounced unsafe and shut down for good. The device used to "push fun" is actually still in operation in a State Og cosmetics testing facility in Nevada.

1975 - King's Island - Finally succumbing to the throngs of Jewish protestors outside the entrance, King's Island revamped their "Story of Christ" animatronic adventure. The main point of contention was the final diorama which featured Christ being cannibalized by a trio of Rabbis. Later that year the questionable inclusion of an erect penis on Jesus during the crucifixion was replaced with a more appropriately flaccid member.

1981 - Disneyland - "Detective Frank Spiconi's Lung Cave" was shut down in October after the giant cigarette smoking robot of Spiconi was linked to lung cancer in over 50,000 visitors to the theme park.

1984 - Dollywood - On opening day both the Scorpion Slide and the Cobra Handler's Pit caused multiple fatalities. Surprisingly both attractions continued to operate without interruption for nearly six months, until a raid by federal agents shuts them down for good.

1989 - Disneyworld - A catastrophic meltdown in fission pylon three irradiated a square kilometer of the Epcot Center. FEMA teams moved in, encasing several hundred survivors and the twisted remains of the reactor in ten meter thick concrete.

1993 - Cedar Point - Always quick to bend to the will of the public, Cedar Point became the first amusement park to change the theme of its parade. In March the theme was changed from "Parade of War Atrocities" to "Parade of Giggling Anthropomorphic Animals".

1995 - Dollywood - Good old Pigeon Forge finally gave up on "The Haunted Wet Back Barrio" and the equally offensive "Chief Wampum's Blanket Sale". To this day they still refuse to shut down "Cornpone Coonie's Jazz Music Museum", which features a single photograph of a white man in black face playing a trumpet with the caption "Jazz ain't music ya'll!"

2000 - Disneyland - Not an actual ride closing, but Disney discontinued "Cap'n McShiv's Torso Piercing Hut" as an agreement with the courts in a class action law suit.

Putting together this little history lesson has given me a painful thirst for hyper-addictive intravenous drugs. Sure, some of those rides needed to go, but I for one will truly miss "The Atomic Fun Pusher" among others. The sheer joy of being shoved along the ground at high speed by an invisible DNA-searing blast of gamma rays was worth every scrotum nodule I've developed. Heck, it was even worth that nasty case of Hydrocephalus I came down with the day after enjoying it.