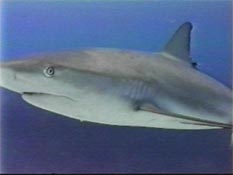 There's an eight year old boy's arm in my soup. Oh wait, that's what I ordered.Those crazy sharks are at it again! Most recently they took a heaping helping of little kid leg home with them to the briny deep and the poor boy did not survive. This is no laughing matter people, so wipe those sickening grins off your faces and listen up. The East coast is facing a shark epidemic of Biblical proportions, assuming the bible actually had something as bad ass as shark attacks in it. Every time I read the Bible in the shed in Sand City I kept seeing silly prophecies about locusts and the rivers running red with blood. Red with blood from what? Piranha attacks? Those little bastards are chump change nibblers compared to the awesome terror of the ferocious great white shark.

These attacks are not isolated. They are not just a seasonal or even centennial rise in the tides of shark on human violence. This is a sign of the end people, the sharks are rising up to destroy us.

1980 - Three people are attacked by a tiger shark off the coast of California. All three survive and the shark is killed by the Coast guard.

1990 - Seven people are attacked in five separate incidences of shark violence. Two of these people do not survive their injuries and a third survived but was never able to do his soft-shoe routine again.

2001 - Kids are getting eaten right and left by the sharks. We are a human Ponderosa buffet line for these bastards.

2010 - The first inland shark attack is reported. Disguised as a cheerleader, a nurse shark bites the throwing arm off an Oklahoma high school's star quarterback.

2020 - An oil prospector discovers a massive network of flooded tunnels beneath his property and informs the police department. The US Navy launches an abortive attempt to clear the tunnels of the shark menace. Almost 500 Navy SEALS are lost in the disastrous mission.

2030 - Having successfully installed a great white shark as the president of the United States by manipulating congress and the senate, the sharks quickly legalize the consumption of live humans. We are at their mercy from this point on.

2060 - The last human dies, an astronaut who escaped to the anti-shark ion cannon station orbiting the earth in the final days of the shark/human wars of the 50's. The sharks return to the seas, their dire quest completed. 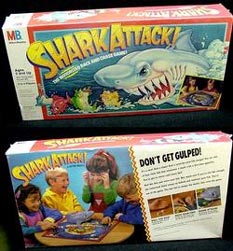 Games such as Milton-Bradley's "Shark Attack" may look "radical", but they are a dangerous trap for impressionable young minds.I really can't pin it all on the sharks though, it is definitely a case of the media sensationalizing things and making it sound "cool" and "with it" to get eaten by a shark. Game makers are churning out cute games like "Shark Attack" that desensitize children to the horrors of being mauled by the rabid bear of the deep. Films are rampant with pro-shark imagery as well. Just yesterday I was watching my bootleg copy of "Deep Blue Sea" and there was a part where LL Cool J talked about how he wished he could get eaten by a shark. The one character in that movie who didn't think sharks were "all that" was Samuel L. Jackson, and I think we all know what happened to him (drunk driving accident).

Despite the fact that he no doubt played the Shark mod for "Half-Life", I feel sorry for that eight year old who got his arm bitten off by a shark and then reattached. I think instead of attaching the arm back on the kid - who is in a coma and can't use it anyway - the doctors should have attached the arm to the shark to remind it of what happens when you try to attack a human. Then when the shark would go to play cards with its buddies the other sharks would all laugh at it and make fun of its human arm. That might make old sharky think twice before trying to make a meal of another 8-year old boy.

I still don't think even that would be taking things far enough. We need to put a stop to this ominous shark menace before it has a chance to really ramp up to full speed. Depositing anti-shark mines around all of our beaches wouldn't work because human swimmers are far more likely to hit a mine than a shark ever would be. Sending out anti shark submarines would get way too costly, and the same goes for shark patrol jet bombers. I think educating the humans about the dangers of sharks is the only way to go in this situation. Following on the heels of my highly unsuccessful hygiene tips, I would like to propose the following shark safety tips be posted on or near every public beach.

The only option remaining that is both cost effective and feasible is beyond the reach of our current marine scientists. Sharks function as a hive mind, with a single queen shark attended to by worker and soldier sharks. If the queen shark could be located the United States could send a fleet of submarines to destroy her lair. Unfortunately she has up till now managed to evade detection by hiding in the coastal waters of China and deploying decoy queens fashioned from shark spit and seashells.