Keep breathing like we practiced, Claire. I'm at least a half an hour away, so I need you to come to terms with the situation. You're going to deliver this baby by yourself. I'm sorry. The paramedics won't get there any sooner than me. You can kill me for suggesting we move into that secluded lakefront cabin later. For now, you can love me for being a brilliant doctor that can talk you through this. Why yes, I am on the cell phone. Don't worry about the minutes. Our plan has tons of them. Of course I know you like to talk to your sister every weekend, but there are bigger things at stake here. Sure. I'll try to make it as quick as possible.

Since your water has already broken, this next bit is vitally important. Probably the most important thing I'm going to tell you. Are you listening? Well then turn off the television. I know it's a very special Mythbusters, but that's why we got Tivo. Fine, I'll wait until they finish explaining why they have to use explosives to prove that refrigerator lights don't stay on when you close the door. Just let me know when you're ready.

All right. Where were we again? Yes, thank you! Your water! This is tremendously important, babe:

You say you wanted to drink it, but it was all over the kitchen floor and the dog beat you to it? It's all right. We can get a new dog after you have this baby. Something more exotic? A dingo? I don't know. I was leaning towards a hyena myself, but we'll talk about it later.

Take one of your makeup mirrors and lay down on the couch, positioning the mirror against the armrest at your feet so that you can clearly see the birth hole. Yeah, I know what you call it but birth hole is the medical term. You can't? Well then you might want to take off your sweatpants. I know they're comfortable but you'll need to clear a path for the baby, and to do that you need an unobstructed view. You can't just push and hope the baby comes out like they do in the movies.

Now the first thing you should see in there is a small lever and a bank of illuminated buttons. Pull the lever down, being very careful not to touch any of the buttons. They're traps, every last one of them. You're doing fine. The first airlock should open up once the lever is in the down position.

The troll that you see up ahead is harmless. He is going to present you with three riddles and we must answer them correctly to continue. Just repeat everything he says and we'll get through it together. 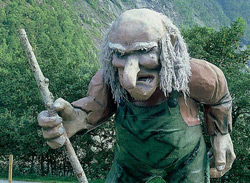 Your baby's birth shall not be / Until you answer these riddles three"I sit on your head all day, but you will never see me in the mirror"? I've heard that one a million times. It's an invisible hat.

"Though I will always be there when you don't need me, I will not be there the two times in your life when you do"? A Canadian quarter.

"I am a train"? Hmm, haven't heard that one before. Let me think this one over. What are you doing? Don't answer, I'm the doctor!

Oh, you got sooo lucky with that one.

Now beyond the second airlock that just opened there should be a rope bridge. Cross it, being careful not to fall through any of the rotting wooden planks. Let me know when you get to the time-bomb at the end. I know, I deal with this stuff every day. Well that's why I get paid so much money. I don't know how women survived this in the stone age either.

Okay, what's the bomb look like? Oh no. That can't be. They've gone nuclear. How much time is left on the display? Yikes. You see the compartment with the blue plastic casing? Open that up and you should see a mess of wires. Cut the orange one, and hurry. You only have about twelve seconds.

They're all orange? No, are you looking at the right compartment? Stop wasting time yelling at me, just pick one and pray!

Thank God. The final airlock should open any moment now. A tremendous jet of flame will shoot out, sterilizing the entire pathway before the baby comes through. You need to turn around and run out of there as fast as you can. The trick is to dive in slow motion at the very end so the flames roar by just over your head.

Yes! I knew you could do it! You're handling this like a pro. Now you can start pushing, but be careful. If you push too hard a second baby will come out, half the size of the first one with twice as much body hair.

The baby's out? Hurry, he's not used to breathing oxygen so you need to slap him to shock his system and make him gasp. No. You can't wait until he does something bad. This isn't punishment. You need to do this quickly!

No, I don't think telling him a story with a shocking ending will work. Well, for one he doesn't understand the english language. Even if he could, you can't tell a story for shit. Don't get mad at me. I love you but it's true. You're all over the place. Every other sentence reminds you of something completely unrelated that causes you to interrupt the logical progression of the tale. Your stories are nothing more than a series of increasingly confusing detours, Claire.

Wait, the baby! Pretend he's me and give him a healthy slap.

You slapped him twice? That won't do. You need to slap him again. One slap puts him into oxygen breathing mode, two sets him to helium. The third will put him back on oxygen. I know it would be hilarious if his voice was always high-pitched, but do you have any idea how much it would cost to keep a constant supply of helium tanks at the ready until he's old enough to get a job and pay for his own? Besides, it would probably lose its novelty after the first 12 years or so.

Good job, honey. I'm so proud of you. All that's left is to cut the cord. You don't see what that has to do with the baby? It has everything to do with the baby. Well that's why I'm the doctor. Trust me, you want to go ahead and cut that cord and tie it off.

Okay. Think, man. Think! What store sells phone cords at 2 in the morning?