Things My Grandchildren Should Know


I don't believe in adoption, so I know for sure that I didn't adopt any worthless grandkids either. If a child doesn't have any parents, then that's what the President decided was best. We've got factories and moon mines that need good workmen, and a big pile of crying orphans is just as good as any man if you chain them together and slowly electrocute them.


In short, you kids don't belong to me, and I don't want you. But nonetheless, I want you fake huckster children to know the following things since you are here in my house presuming yourselves to be my progeny.

First of all, I do not love you, nor have I ever loved you. You are faster and more agile than me, and that has made it extremely difficult for me to beat your little brains in. If you were slower, I most certainly would have caved in your faces by now with a well placed fist. Not out of spite or hate, mind you, but out of duty. I want my grandkids to know first and foremost that I love child abuse more than anything. Also, you are not mine; you are someone else's grandkids living a lie. I do not love liars and anyone who says otherwise is a liar. Thus I doubly do not love you.

Second, your parents lied to you. They are not my children and if they were my children I would have beat them a lot better than they beat you. I'm not even sure they beat you at all. If they did you would probably not be such a loathsome band of whores and thieves trying to steal my old man money.

Third, you will not get one cent of mine. You may, however, have my scent. I keep mason jars of it in the shed in case of emergencies. As for my other possessions, such as my old recliner and my box of unopened mail, you may not have those. They are to be burned along with my body inside a rocket bound for the sun, as stipulated in my will, which is probably in the box of unopened mail or in the cracks of my recliner. If you find it, you damn well better honor it.

Fourth, I need some work done in the backyard if you are handy with a shovel. You're not? Of course you're not, you wretched clouds of living smog.

Fifth, in my day we showed respect to our elders. The fact one of you just peed on me is an insult to everything I fought and nearly died for in World War III. If you think your urine is enough to get me down, then you can't even imagine what it was like in the gut-strewn trenches of Ohio fighting off the Chinese Rocket Men in the great name of theocracy. We used little children like you as shields in those days, and we'd do it again in a baboon heartbeat. Besides, I lost control of my own bowels long before you were born. I've done far worse to myself through accident than you could ever hope to compete with.

Sixth, if there is one thing I hate more than a Chinese Rocket Man, it's a cavalry of goddamn Germans riding their mutant fire ants. Beyond those things, I hate crying children. To the one of you standing over there crying and looking all scared: shut the hell up, you! I didn't shed one tear when they blew up Pittsburgh and everyone in it, so what the hell are you crying about?

Oh, it occurs to me just now that you probably want some candy. I don't have any damn candy and I don't know how you got in my living room since the door is locked and I actually live in the woods far away from everyone. I suppose the fact I don't have walls made it easy for you to avoid the locked door. I suppose also the fact that the door is resting on its side in a pile of soiled underwear makes going near the door an unattractive notion. But you should have at least knocked first. I would not have let you in, but that's beside the point.

The fact I am dead and rotting is of no concern to you dumb kids, is it? The way you poke my lifeless corpse with that laser stick shows how little respect for your elders - your betters, as we should be called - you have.

I guess there is one last thing you should all know, and that is lesson number seven. When you die and are a ghost like me, I will strangle your ghost necks with my ghost hands and we will find out if there is life after death after death. Go ahead and keep pretending you can't hear me, you stupid lumps. Sit there in my house poking my body with a stick all you want, but you'll grow old like me, and then you'll die just like me. And for every moment you spent in my house without my permission poking my body, I will repay in double with my vengeful hands. 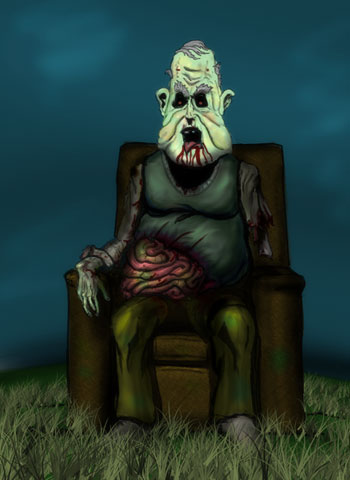