I'm a casual baseball fan. I don't really root for any particular team or follow the ins and outs of professional sports. I do, however, enjoy going to a baseball game every now and then. There is something uniquely American about sitting in a big stadium with thousands of screaming fans on a warm Summer night and watching commercials.

Many people think baseball is boring but nothing could be further from the truth. There is a subtle strategy to the game not unlike chess. There are minute facets to consider, such as the best spots within the stadium to place ads, which inning should be sponsored by which product, and how many of those little baseball events that happen during the course of a game the ballclub can shamelessly sponsor. "This stolen base brought to you by Bob's Big Boy!" 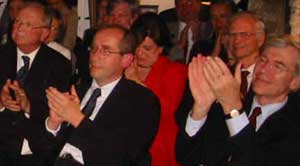 Angel games are a little more civilized than your average ballgame.Angel fans harken back to a time when baseball was a gentlemanly affair. Fans sit quietly in their seats with their hands in their laps. Families dominate the left field pavilion. A good, friendly time is had by all. Exiting the ballpark even in the throes of the ninth inning is a pleasure because of the mutual understanding of right of way and merging etiquette. Respect, dignity and good old fashion American courtesy is the name of the game at The Big A. It doesn't bother us that the park is infested with rats. That's just another part of the game.

Prior to last month I had never been to Dodger Stadium despite living my entire life in Southern California. Orange Countians just don't go to Los Angeles unless they have to. When I was younger my dad took me to the roof of our house and told me that everything the light touches is mine. I asked him what that dark spot was. He told me it was Los Angeles and that I should never tread there. Of course that only made me want to go even more. When I realized that L.A. was an elephant graveyard filled with hyenas, I swore off the place for good.

While Los Angeles has changed considerably in the past decade and the elephant carcasses have been cleaned up, it's still not a pleasant place to find yourself. When a workplace acquaintance told me he had an extra ticket to a Dodger game and asked if I wanted to go, I was a bit hesitant at first. Surely I, Hassan Mikal, could not be seen with the ruffians that make up Dodger fans. I have a reputation to maintain and that's being the bottom rung of a team of writers for a web site that somehow has more enemies than Al Qaeda.

I went to a total of three games. Here are some thoughts on those experiences in my otherwise boring life that consists of sending fake complaint letters to major corporations in the hopes of getting free product and coupons.