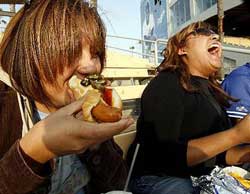 All-You-Can-Eat Pavilion? Cousin It approves!The pavilion comes with a number of guarantees such as at least one fight in the stands per game, peanuts getting thrown at the back of your head, and one fat Mexican guy sitting in the very last row yelling shit at the players in Spanish. There's a reason they don't serve beer there and it's that guy. I think he's the mascot or something.

"All-You-Can-Eat" might have been nice if the food were actually edible. The famous "DodgerDogs" taste as if they have been sitting in a microwave for six hours. It's no surprise that the soggiest hot dogs in baseball are named after the soggiest team in baseball. I eventually realized that the food is not there to be eaten, but acts as an unlimited cache of things to throw onto the field.

How much more American can you get? Baseball, commercials, (the seventh inning stretch is sponsored for Christ's sake), and rampant obesity. I get a little teary eyed just thinking about it. Oh beautiful for spacious skies, for amber waves of grain...

Booing is a time-honored tradition at Dodger Stadium. If you call things a tradition they don't sound as bad. Dodger fans are babies and boo at everything. The umpire called the opposing player safe when he was obviously safe, they boo. The usher took their beach ball, they boo. A woman didn't flash the crowd, they boo.

They boo when there's nothing to boo about. I attended one of the games in the recent series against the Giants. The Dodgers are at bat and the batter just stepped up to the plate. Suddenly there's booing. Turns out Bonds took one step to the right and the left field pavilion didn't quite like that cocky move. Shouldn't the fans, you know, be cheering on their team's batter? Never! There's one record Dodger fans will never give up, being the least classy fans in baseball!

The details of the game such as who is playing and who is winning have little to do with the traditional baseball experience.

Never Get Your Hopes Up 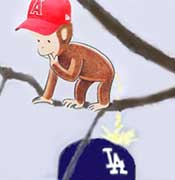 This image of Curious George peeing on a Dodgers cap in a tree sums up my feelings perfectly. I could have gone with Calvin from Calvin & Hobbes but sometimes I like to mix it up.The most important thing to remember about baseball is to never get your hopes up because in the end your team will always disappoint you. This is no truer anywhere than with the Dodgers. There is a time during the game when the crowd is pumped up, the various screens are telling people to "GET LOUD!!!", and the count is 3-0. A Dodger steps up to the plate. Here comes the pitch. He swings and... and... AND... pops out.

Just last week the Dodgers were in first place. Now they are five games behind in fourth. Did you guys really think it was going to be this year? In a sport where a 30% success rate is considered great, you will always be let down.

We left the game during the top of the ninth. It was like running away from a tsunami of drunken fans while trying to dodge car after car ignoring parking lot attendant directions and just blasting through pedestrian walkways without a care in the world. One guy actually drove his Geo Metro straight past an employee motioning him to stop while giving us all the finger.

Do you really think the fat screaming drunk asshole from the pavilion is going to be any less inconsiderate in the parking lot? They should really build some pedestrian bridges throughout that parking lot and increase that traffic flow my brotha.

You will eventually find yourself in the hospital wondering where you are and how you got there. Such is the life of a Dodger fan, a life I lived for a short couple of weeks. I learned many things about race relations, America, and myself. I would tell you what those things are but writing is hard.

Will I ever go back to Chavez Ravine? Only if the Dodgers get to the World Series. I'll jump on that bandwagon so fast. In fact, that's pretty much how I became an Angels fan. 2002 World Champions! Woooo! See you next century!