A Complete List of Dogs I Have Killed So Far: A Memoir

There comes a moment in every dog's life when it must decide between being destroyed and later incinerated by me or not firing its goddamn dangerous teeth at me in a completely outrageous, murderous way. To be fair, I do not know if every dog needs to make this decision, but I am 100% positive at least 2 dogs thus far had done so, and until evidence can be provided to the contrary (burden of proof, etc.) I maintain that this characteristic decision identifies not just 1 or 2 dogs, but all dogs, and maybe even Indians.

Not long after I had slain the second dog, a third dog crossed my path. I use this expression in its most literary sense in that there was a path in front of my highly upgraded mud hut that I considered mine as far as any object or idea can be attributed to or owned by an individual in this world. And one evening (it was neither day nor night, I cannot think of a more accurate way to describe this complicated state), a dog crossed it. To the credit of dogs everywhere, this third dog was as close to being my friend as I could comfortably imagine, due to the fact that this dog had lost its teeth in some kind of accident- a misfire, if you will-at some previous time and in some distant location.

As to whether his teeth were lost in an act of aggression or perhaps even a stroke of misfortune, I cannot say. But as you may suspect, given my prior experience with dogs, I still did not trust his intentions. Dogs without teeth are, in a very tangible way, harmless, but as one very famous President once said: "Trespassing is as much of a crime as biting."

Due to our more intimate relationship, this third dog I decided to punish for attacking my path by causing it to drown it in a river. I fashioned a net out of a material excellent for making nets, snared the beast, and tossed him into the drink. In retrospect, I cannot confirm if this dog died immediately, or farther downriver, or even at all. I can conclude, however, that I lost forevermore my Hudson Trail Outfitters brand woven microfiber hunting net, and can only assume some murderous Indian and/or dog recovered it from the river and has some terrible designs in store for me. 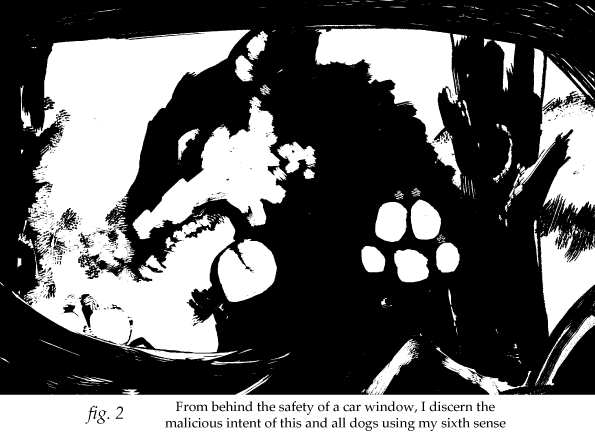 This fourth dog (who was the first dog, really, in time) engaged me through the crystal pane of a sturdy car window. And yet the danger that radiated from the beast was in no way diminished by the seemingly indestructible plane of glass that contained it -for the moment anyway- at a relatively short distance from me in space. I could not hear this dog's teeth mashing, nor smell its teeth or surrounding organs. And I certainly could not touch its dangerous body. (My first tactile encounter with a dog came later; see: the strangling.)

Although it is true that I could see the animal due to the transparency of the window and if we are counting senses (and I will assume we are), it would not be an exaggeration to say that I could also sense this fourth dog and its murderous attitude toward me in the sixth-sensory way that, looking back at it now, really quite accurately embodied the attitude that ALL dogs would thenceforth express towards me, my food, and the path near my mud hut (at all stages of upgrades and modification). I conclude that this painful first encounter left a deep impression on me and was no less violent -at least not explicitly so- than my future encounters with dogs and functioned as a perfect example of what scholars and educated Indians often call "foreshadowing."

The End, So Far

You can reach illustrator William "ryorininseven" Cook at this site, to request commissions and such, but please don't call him a monster for drawing dog death, he was just doing his job.