It was shortly after the publication of "The Czar of Tranquility," the final installment of his popular "Perseus of the Moon Kingdom" series, that Groggery Tirade "Grog" Gibbonman resumed working in faerie-stories. Unpublished by the author, these works were collected by vagrants rummaging through Gibbonman's trash. More than 2,500 short-fiction pieces were released in transient-plagiarized compilations before Mr. Gibbonman purchased a rifle. 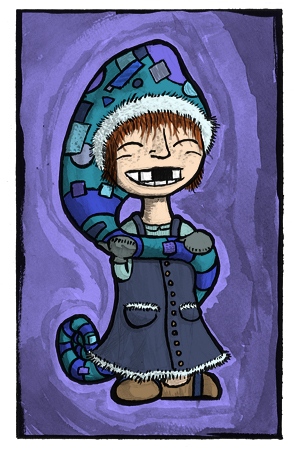 In a year lost from history books, in a town map-makers snubbed, there lived a little girl with hazel hair and shining eyes. She lived on the plains with her grandmamma, and they were happy there, far away from here and now.

The girl was often seen walking, playing and exploring the fields, with her freckled cheeks and new-toothed smile beneath a traveling cap. And what a fine cap it was! Quite too big for a girl so small, the color of deep ocean's blue, and so a name became stuck to her in the minds of all who knew her: Little Blue Hat.

Little Blue Hat set out one day to walk to a mine that she had heard was fun to visit, and she brought along a basket of milk to pay for her admittance. She laughed and sang merrily as she skipped along the road, but as she came to the top of a small hill she slowed her pace. A dark and boiling and stampeding thunderstorm was lapping at the sky from over the horizon ahead, above a sea of flat whistling plains, dotted with hills like islands on a grass ocean.

Soon the storm spilled over into her sky and Little Blue Hat felt it begin to rain; first a drip, then a patter, and finally a deluge. But though no shelter could be seen for miles to any side, she did not mind the rain. Not one mote! "Hooray, what fun a rainy day can be!" she laughed as she splashed the puddles forming on the road. "And no-one to tell me to come inside, now that Grandmamma is away at war!"

Bubbling with merriment as she was, and muffled by the rain as it would be, Little Blue Hat did not hear the crumbling of the dirt just next to her. She was thus startled when a voice sounded right at her side.

Little Blue Hat gasped and threw her basket of milk high in the air, the bottles spilling and shattering behind her. In front of her stood, or perhaps that is not the word, a worm, who though one might describe earthworms as common was certainly no such thing.

"Oh dear!" said Little Blue Hat to the worm, who, even with most of his body still subterranean, was nearly as tall as she. "I'm sorry, but you took me by surprise! How is it that you know my name?"

"Your actual name is 'Little Blue Hat?'" asked the worm with a dash of disbelief and a pinch of pity. "I can't say I expected that." He had no eyes to brow and thus no brows to arch, but certainly he did the best a worm could at it.

"Yes, and I'm glad to make your acquaintance!" said Little Blue Hat, who then curtsied. "And yes sir, Mr. Worm, it is a beautiful day. I do love the rain!"

"The way I perceive ..." said the worm as the visible part of him wriggled upright " ... is that if I must leave, and risk death above ground to avoid being drowned, then whatever the weather may be, I perceive, it is better to weather the weather unsheathed." 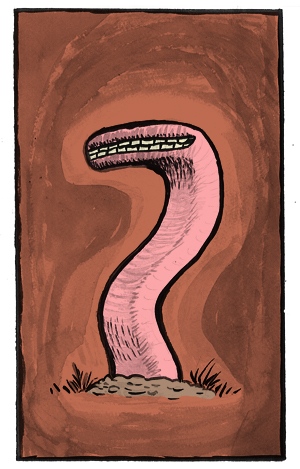 Little Blue Hat smiled at the funny way the worm talked, and they conversed for some time together in the rainy field. They talked of clouds and stars and politics and religion, and they debated the ethics of putting men to death in jails, but though she was having a lovely time, Little Blue Hat soon realized she had to be on her way.

"But that mine is one hundred and ten miles away!" said the worm. "And you tell me already you've walked days and days? No no ..." he objected "I insist. For a trip such as this, you should come ride below in my tunnel, young miss."

The worm wriggled with some effortful grunts, and eked out a little room in his burrow's opening, just enough to fit Little Blue Hat. As the tunnel widened, so grew her eyes.

"You mean, under the ground?" she asked in awe. "That would be faster?"

"Certainly, yes indeed, that's true and hence, you'll see once inside that it makes perfect sense." The worm receded into the dark underground passage and gestured, somehow, for Little Blue Hat to follow.