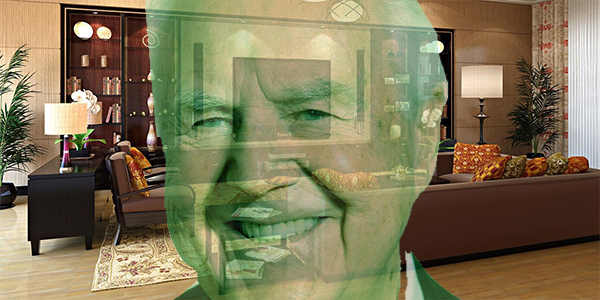 It's been a long, Pardo-free month, and I hope you're all doing well. Me? I'm wandering the earth as a god-forsaken spectre while that chubby boy with the Clinton impressions does a pale imitation of my golden voice, which honeyed American airwaves for over 70 years. As much as I'd like to head off to my great reward, one major issue stands between me and making love on a cloud with Greta Garbo for eternity: no one seems to think I'm dead.

Let me take you back in time to 1926. As an eight-year-old boy, the local horse doctor-which regularly treated and shoed the local children-diagnosed me with a condition known as "ghost throat." My booming, warbling voice began to trouble and frighten my school chums, so, for the sake of my socialization, mother took me along on one of her weekly trips to buy horse tranquilizers, a regular addition to coffee before all of those heart failures. There would be no cure for little Donny, but that kind, manure-covered man opened the door to my new path in life: announcing.

This traumatic condition served me well through a career that spanned most of the 20th century. And when that shaggy-haired Lorne Michaels came to me with an offer to be the voice of his new, late-night variety show, it didn't take long for my voice to become synonymous with Saturday night. Of course, it didn't always go smoothly. When some dope-smoking PA hands you a script containing the words

You just have to soldier on and assume they're not pulling a fast one on you. Of course, you can only push Mr. Don Pardo so far. When they asked me to say

I refused, which caused a week-long hustle to find a new act. Well, I don't think anyone was complaining when the words

Blasted from my diaphragm. In fact, the lead singer thanked me personally. He was a very nice young man and I'm sure he's gone very far in life.

In life, my voice was a blessing, but in death, it's been nothing but a curse. After reaching the age of 96, your family starts to assume you'll live forever, and dying quietly in my bed hasn't done much to convince them otherwise. Because I sounded like an otherworldly apparition in life, after death, it's been very hard to get those around me to take my various hauntings seriously. When I wander the halls of my great-grandson's home, working up the most ghostly moan I can, the only response I get is "DAD! Granpa Don needs his pills!"

I've even resorted to shouting out-of-context nonsense in the presence of my living family members. They'll be sitting quietly, watching TV in the living room, when suddenly, the names

Bounce across the walls. The only response this gets? A shared look of concern, followed up by statements like "We need to look into assisted living home soon."

So please, if you have some means of contacting my family, let them know I'm dead, and my body needs to be buried before I can move on to the next world, After 40 years of saying thirty words a week into a microphone, I'm ready for some eternal rest. And if this goes on any longer, who knows? I may become one of those crazy murder-ghosts the movies can't stop talking about. Do you really want the words

To be the last thing you hear before your heart bursts in the clutches of my ectoplasmic fingers? And, before you start wondering where a man approaching 100 years old knows such a bizarre word, trust me: When you spend as much time around Dan Aykroyd as I have, your mind is full of crazy horse shit.

– The Ghost of Don Pardo