It's almost time for critics to start compiling their Best-Movies-of-the-Year lists, and Dave Grohl's Sound City should be a solid contender. It boasts a perfect Rotten Tomatoes rating, including critic Erick Weber's somewhat unsettling claim that it "acts as a defibrillator for your creative juices." Apparently it had this cool effect on WET BUTT, who wrote about scenes that might have somehow made Sound City even better, had Grohl thought to include them in the final cut, or film them at all!

Ghost of cobain: Dave. its me from nirvana

Ghost: Thats right dave, im up there in heaven now, and you know I'm jamming with jimi, Jimmy smith from jazz, I make jazz now in heaven

Dave: Thats stupid. there aren't even words and you cant tell if the songs are about anger

Dave: I'm tired of your crap. Fucker. U killed yourself as sabotage against the foo fighters, and now I'm
gonna send you to hell where u belong 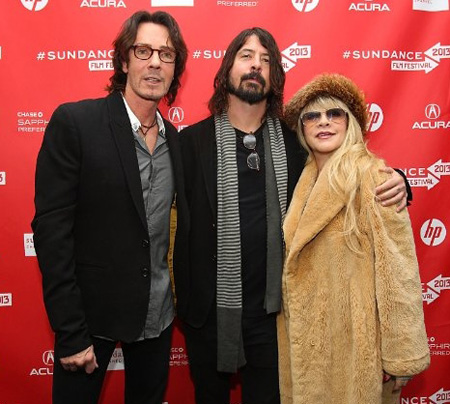 Dave grohl is wandering around the forest looking for a cool raccoon he saw digging through the garbage behind the studio. Dave got frustrated and beat the hell out of some campers and theyre all on the ground hurt/unconscious.

Dave spends next 6 mins of the film in complete silence wandering around the forest making meaningful glances at the moon or the water, saying stuff like, "damn..this was all here first" and "this is where music really began." Dave sees a bird singing and smiles, as if he is thinking, "that bird is the real foo fighters"

Old wise black man: Nah Dave, that's not quite it son. U gotta let the kick drum dance with the bass line..them two are young lovers, in each others arms

Dave grohl: I can't do it Wallace. im never gonna do it. i suck! Dave sucks!! *throws the mixing board over* *tips over Glacier Smart Water bottle which the cam zooms in on and holds for 1 entire min*

Shitty electronic guy: (singing) Yeah, yeah, we are all fun tonight. check it out big time

(stuart scratches his chin at the thought bubble, whose grohltee hairs begin too rattle w/ the scratching, signifying the unity of all living things)

Dave: (looking out back of truck) Not just yet, little buddy. (Cam focuses on guitar center) As we speak, kids in that place are being ruined by rap music machines & auto tune. theyll probably never hear the best of you on the best of you: the best of the foo fighters at best buy. Drive this back home. Ive got business.

(dave kicks open back doors of truck and dives out onto the highway, rolling past oncoming cars which crash into each other, then Dave rolls off the highway and base jumps off the railing towards guitar center parking lot, deploying parachute)