Hello once again, loyal members and assorted hangers-on of ELEAWTA, the only worldwide organization devoted to beating the living crap out of endangered animals for the benefit of all mankind. Things have been quiet for some time. Perhaps you thought this esteemed organization was defunct? Perhaps you thought I had been imprisoned for cruelty to animals and various crimes against humanity? Perhaps you thought I would never resort to dredging up this tired premise? Well, I'm happy to say that you couldn't be more wrong, dumbass! I'm still here, and as the founder and president of ELEAWTA, I've spent the last few months advancing our great cause. I've traveled the world, meeting my fellow members and helping them in some of the most amazing endeavors ever attempted by mankind. 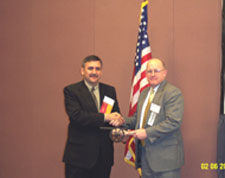 When some guy handed some other guy a tiny fake cannon in front of an American flag, I was there!

In Spain, I helped Fernando Verdago convince a rare Spanish Viper to put its life on the line in a high stakes game of chess. In Uganda, I refereed as Umba Ngogodo triumphed over the rapidly disappearing African Panther in a wrestling match in a kiddie pool full of K-Y Jelly, only to then triumph over some hollandaise sauce while eating the ferocious creature. As close as Vermont, I watched as Ike Gunderson was trampled to death while trying to pursue the protected Bull Moose. Truly, ELEAWTAns everywhere are accomplishing great deeds.

You know, as the organization's spokesman and entire legal department rolled into one, I face a lot of controversy and harassment over our beloved group and our goals. It's hard enough trying to dodge the press while simultaneously sending myself to issue bland, generic statements on my own behalf explaining while I'll never speak to the press, without having to face the kind of opposition that I encounter each day from animal rights groups, religious extremists, and sign-waving hippies. I've had to defend us against all manner of accusations. We've been called murderers simply because our one of our primary functions is to kill. We've been called crazy just because half of our members die in freak animal attacks. We've been called criminals just because we break the occasional dozen laws, statues, or federal preservation acts. We've been called a bizarre cult just because we gather each night and strip naked in praise of Grongomet, the many-armed weaver king whose word binds galaxies to his glorious plan. Well, frankly, I'm tired of all this bad press. We've become a joke to those who stand against us. It's high time we cleansed the nonbelievers in a tide of blood and journalism. Just look at this recent article:

Now, I know at first, this headline makes it seem like a good thing. Well, except for putting a totally unnecessary hyphen between "orang" and "utan." Crazy Australians. But sadly, the article goes on.

The orang-utans, wearing boxing gloves and shorts, are put in a ring and encouraged to fight their opponents using fists, knees, elbows and feet.

The operators of Safari World animal park say the fights - which start with the Rocky movie theme and include bikini-clad chimpanzees carrying bout number cards - are choreographed and no animal is harmed.

But animal rights groups said the apes were being exploited for profits and were destined for a short and miserable existence after their days in the ring were over.

"It's outrageous. There's no question of it being justifiable in any sort of way," Cyril Rosen, of the International Primate Protection League, said. 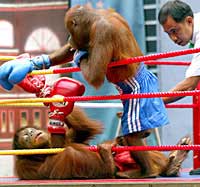 Now I ask you, what has this world come to? There was a time when Thailand couldn't be shoved around by some whiny International Primate Protection League. Dammit, I remember the good ol' days, when you could go to Thailand and see two orangutans pound the monkey snot out of one another while sexy, bikini-clad apes informed you of the round and brought you beer. Have we lost our way so much that the simple pleasures of monkeys in boxing gloves no longer unite us? Apparently not, as Cyril Rosen, would like to have us believe. Listen, Cyril, just because you're upset about your first name, don't take it out on the rest of us.

As I've always said, ELEAWTA is a humanitarian organization, so when I see something that harms mankind so terribly, such as the eradication of monkey boxing, I am forced to leap out of my seat and shout, "I shall not stand for this injustice!" Then I sit back down, because I'm a man of my word. But I believe that this is more personal. I think that Cyril Rosen and the Funky Bunch are gunning after us specifically. Think about it. Our mission is to engage the world's most dangerous animals in combat. Here we had a program which trained orangutans to defend themselves through kickboxing. Orangutans may not be endangered quite yet, but with the deadly art of kickboxing on their side, they would certainly qualify as dangerous. And that brings them one step closer to catching our attention, which is one step too close for the comfort of the International Primate Protection League. We have to send them a message that this sort of discrimination will not be tolerated. Please send a copy of the following letter to the International Primate Protection League representative near you.

For too long have animals rights groups like yours stood in the way of Eating Lethal and Endangered Animals While They're Alive (ELEAWTA). While you limit the scope of your organization to specific creatures, we work for the benefit of all mankind. Forcing Thailand to ban monkey kickboxing is the latest of many outrages perpetrated against us under the guise of "saving animals." Saving them from what, a zoo? That's like saving a fish from the ocean! It is clear that you simply do not want the monkeys to know how to fight, so that they can never pose a threat to human beings. How selfish can you be?

Let's face it - the environment is in a steady decline. With the state of the world, there's no telling how animals that are unable to adapt to changing climates and harsh pollutants will fare in the future. Idealism is a wonderful thing - we would all love to continue imagining that we will manage to repair the environment and all the species of the world will prosper for millennia to come - but someone has to face the reality of the situation. If people were honestly committed to repairing the damage we have done and continue to do to the environment, do you honestly believe that George W. Bush would have a chance in the upcoming election? ELEAWTA's primary goal is to document the flavor, texture, and best preparation of some of the world's rarest creatures before they are gone forever. Being fair-minded people, we also refuse to eat any endangered animal that cannot at least attempt to fight for its life. By depriving these monkeys of their combat skills, you simultaneously prevent us from ever finding out just what a well-trained, kickboxing champion orangutan tastes like. Can you honestly say that you know what type of wine best complements a kickboxing ape? Can you? I thought not. And if you continue your insane crusade against monkey boxing, we may never know the answer to that important question.

Perhaps it is time for you to stop being so obsessed with monkeys and start thinking about your human beings. Remember, man is the most precious primate of all!

If we all do our part, they can't ignore us! For the time being, consider all orangutans off limits, but keep dreaming of the day when we will be able to walk through the streets of Thailand with our heads held high, pass an adorable monkey, and kickbox the fuck out of it. Happy hunting!