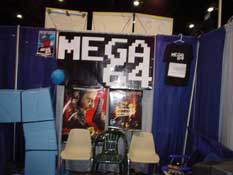 For those not "in the know" about the annual San Diego Comic Con, I'll give you a summary of its formula: take all the booths and sweaty fanboys from E3's halls, throw in a cornucopia of comic books and violent porn cartoons, then toss them together into one gigantic moist room. And much in the style of Walt Disney and his efforts to give certain Disneyland rides distinct aromas, the San Diego Convention Center employees pay equal attention to detail by having God Himself cut a post-Claim Jumper fart right into the hall entrance. While these ingredients create a plethora of sensations for any convention attendee, there are many more factors to consider for convention exhibitors. I, along with the rest of the Mega64 crew, was given a chance to run a booth there to promote our upcoming DVD - a challenge we were barely bold enough to face. For future generations to reference, I now present to you a list comprised of our own personal experiences: The Top Ten Ingredients for a Successful Comic Con Booth. 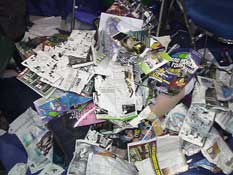 Nothing will make you feel more comfortable and "chill" then decorating your booth as you would your own house. This includes peppering the area with ripped up tax forms and newspapers from home, along with freshly emptied Arby's cups and broken / stolen / burned merchandise from other booths. And just like your own home, never ever leave it! Don't be afraid to make the back corner your restroom. Any booth can have comics, but it will always be what the kids call "poo gas" that pulls in attendee interest!

9. Have a ready supply of mentally imbalanced cosplay fangirls 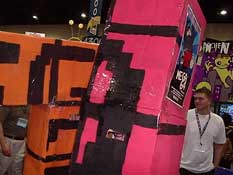 Ask any other exhibitors; you're NOTHING unless people attend the con dressed as you! This act is known as "cosplaying" and everyone at Comic Con does it. From "Sailor Moon Plus 160 Pounds" to "The Retard from Life Goes On," people just love to dress as their favorite fictional characters in a futile attempt to escape their own horrid lives! This is truly a great way to spread the word. We had a group of cosplayers visit our booth dressed as Tetris blocks, who would fit together to form the Mega64 logo! Not only was this great promotion, but their costumes completely blocked the floor aisles, creating a fire hazard which put Elite security in a tizzy! Aside from Shawn's treehouse rape incident, there is no such thing as bad publicity. 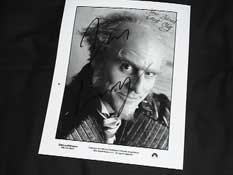 People at Comic Con love getting autographs from their favorite stars. But as bad as you'd like Wil Wheaton to sign that tortilla warmer of yours, popular celebrities can be hard to come by. With this in mind, be sure to steal as many posters and press photos as you can, then crudely forge celebrity autographs across them. Derrick signed about 59 photos of Jim Carrey and one by one left them in the middle of the aisles. For hours we watched people see them on the ground and freak out. And once that got old, we gave these valuable momentos out as prizes, only to insanely laugh while ripping them in half and handing the pieces to the client. This practice establishes a sense of... okay, it was just really fun screwing with people. 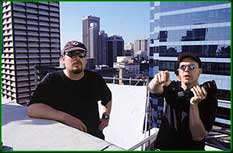 Few may realize this, but the famed directors of the Matrix Trilogy, Andy and Larry Wachowski, were at Comic Con in disguise. I have been a huge Matrix fan ever since this duo asked the Pine Valley Preschool to design the hit game "Enter The Matrix," so I recognized them immediately. My girlfriend talked them into wearing stylish Mega64 pins, while I asked if they would like to appear in a Mega64 skit. They politely declined, stating they wished to remain incognito. This was unfortunate, as I had just sent out their location via "text-messaging" to my friends, who were already showing up in droves and asking important questions such as "why didn't Neo just turn really big to defeat Smith?" and "why would aliens invade Earth if their main weakness was water?" 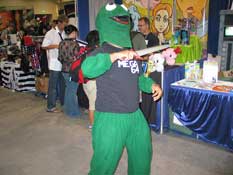 We had Frogger from the hit video game series "Frogger" running around beating up other mascots and committing suicide in front of competing booths. This gained so much attention that Electronic Arts filmed him prancing about for an upcoming commercial, featuring the classic character as part of their "Remember When Our Games Were Original?" campaign. 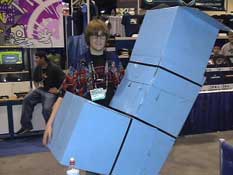 Why spend money on quality merchandise when Comic Con attendees are ready to throw hard earned dollars at your own garbage? We auctioned off our beat up old cardboard Tetris block, which sold for $41 to "DorktorDoom" of the Something Awful Forums. This is a great deal for all, because basically we sold a cardboard box for $41, and now DorktorDoom finally has a place to live. We spent much of our booth time swiping free posters and tote bags from other booths, then scribbling over their logos and drawing our own all over them with stolen markers. Many of these items sold for over $10. At one point, Derrick wrote "MEGA64" all over a bunch of quarters and sold them for $1 apiece. He also convinced a man that we had the only Megaman Anniversary Collection poster outside of Ireland and sold it for $10, even they were giving them out for free at the Capcom booth 5 feet away. In fact, change the last 6 items on the list to "Have Derrick Work At Your Booth." 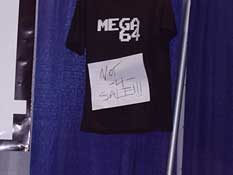 Whenever people asked if we had shirts for sale, we promptly pointed to the "NOT 4 SALE!!" sign we had on a shirt that a friend made for us and watched them walk away. We had a Wheel of Mystery to spin for prizes, and swiftly took it off of the table as soon as a woman gathered her eight filthy children to spin it. She asked us where the wheel went, to which we acted like we had no idea what she was talking about. She then called us "absolutely rude" and took her kids away with her, probably back to hell. By doing this, we create "drama," which is something you may have seen on TNT, and as we all know, they get remarkable ratings. Do the math. 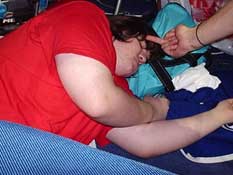 I SAW YOU STEAL IT YOU MAN TAPPIN FOGEY. 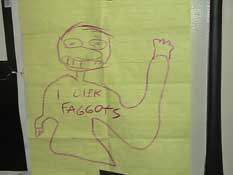 People love nothing more than having themselves drawn by a great artists, so bring a sketchpad and a creative mind. Also, be prepared to throw all that out the door when some sack of crap 12-year old spins your prize wheel over and over again because he doesn't like the prizes. You'll then want to draw him in the ugliest possible fashion with some sort of shirt that offends his sexuality like we did. He'll flee the booth crying, leaving you with an impressive art piece to hang on your fridge. 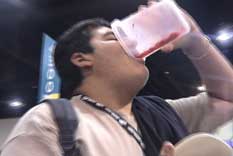 AHAHAHHAHAHAHA, YOU ARE A HORRIBLE DISGUSTING MUTANT

Thanks to all who came to Comic Con, and be sure to check out "Mega64: Version 1" coming to DVD here at Something Awful later this month.

And now for something completely different

Ryan "OMGWTFBBQ" Adams here with a Goldmine unlike anything I've done before. Last week forums Goon Slo-Tek was given some slides from his father, a member of the United States Navy. Slo-Tek scanned them all, then fixed what few color issues there were. The results are amazing, and the photos are powerful. At the end of the article, there will be links to desktop wallpaper sized images. I'd like to show you all a side of Something Awful that you don't get to see too often.

Here is a preface quote from the photographer, Dr. Robert Reiheld.

My son asked me to comment on these pictures. They were taken 71-72. They are all ektachrome, most of which were processed by the photo lab on the carrier. A couple of them were done at the wrong temperature, which gave an interesting blue cast that was "artistic". If you correct them in Photoshop, they don't work as well. 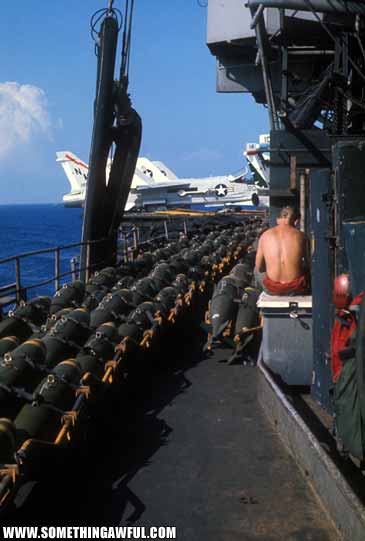 My sincere thanks go out to forum Goon Slo-Tek for posting the pictures and to Dr. Robert Reiheld for taking the pictures, posting comments on each one, and for his service to our country. Please enjoy this week's Forum Goldmine, "Pop's Vietnam Slides."