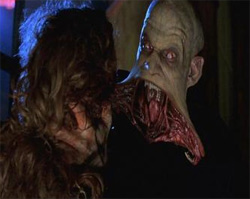 It's basic vampire hunting 101, dip shits. A rock to the skull is not going to take out a vampire. It might incapacitate them, force them into a healing torpor, but in about two days those "emos" are going to bust out of their graves and they are going to be pissed.

You can silver them and leave them for daylight, but we both know for that to reliably work you need to stand guard all night long and expose yourself to attacks by their fellow vampires. The only reliable methods for taking out a vamp are stake to the heart and decapitation.

Do you have the guts to surround a vampire and stake them? Do you even have a single solitary idea of how to prevent them from glamouring you? NO. God forbid it's one of those split-face super vampires.

Making matters worse, not everyone is even on board with wasting the bloodsuckers.

In a response to questions on his website on Saturday, Moqtada al-Sadr, a Shi'ite cleric whose followers dominate Sadr City, described "emo" youths as "crazy and fools", but said they should be dealt with only through the law.

Hate to break it to you, Moqtada, but the laws of nature are that vampires want to eat humans and humans need to waste vampires. Baghdad needs a vampire hunter. Most of the pros were driven out during the war (thanks BUSH!!!), leaving things to the collection of morons currently throwing rocks at powerful, blood-hungry monsters.

It might be too late, the vampiric blood lust might have already infected too many to be stopped, but if Sadr City is to survive they need someone who knows the ways of the vampires, knows their clans, knows where they gather, and can hit them when they least suspect it.

There is only one man who can save Baghdad: 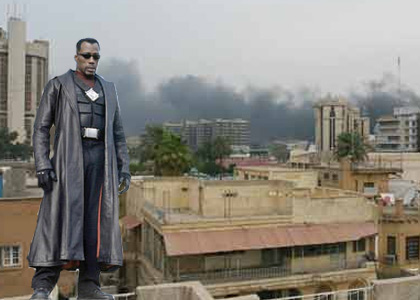 Obama, you pulled all the troops out, but it's time to send one troop back in. The greatest troop. The Daywalker. You know what you have to do to end the emo menace in Baghdad.