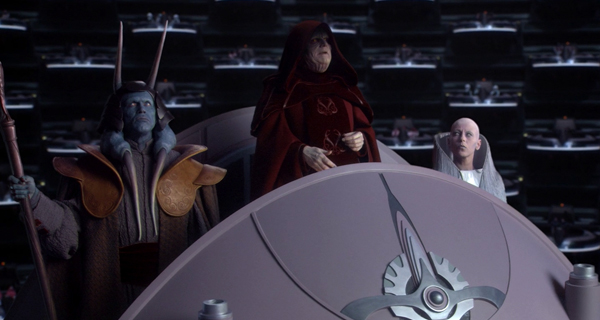 I don't usually post political stuff on Holobook, but I'm seeing a lot of friends rush to judgement after the results of the recent emergency session. So to those of you who are a little worried, I say:

Relax. Take a deep breath. It's all gonna be OK. Just because your guy lost doesn't mean the galaxy's going to collapse. In fact, I think you should give Emperor Palpatine's Supreme Galactic Empire a chance!

Sure, he said a LOT of kooky things early on. Stuff about "manipulating midichlorians to create life" or "executing Order 66" -- stuff I totally disagree with. But I honestly think he was only saying that stuff to court the hardcore voters of the Dark Side. Now that he's been appointed ruler for life, he'll probably mellow out and govern from the middle. It's like the old saying goes: absolute power totally chills you out and helps you find compromise.

Trust me on this!

I know a lot of people were upset when Emperor Palpatine literally ripped apart the Senate, throwing chunk after chunk of it at the traitorous Master Yoda. But that's what people like about him: he's not your average politician! He takes matters into his own hands. If he can throw a limbless Mace Windu through a window to his death, maybe he can get stuff done for regular folks like us!

And honestly, can Palpatine be any worse than the gridlock we had under Chancellor Valorum? All our manufacturing jobs were going to the Outer Rim! If Emperor Palpatine can put people back to work, does it really matter if a Jedi temple or two gets burnt to the ground?

I mean, this is how jobs are created -- with thunderous applause!

Look: I voted for Emperor Palpatine, so if it turns out he's an evil monster or something, that could somehow make me feel wrong or stupid. And my sense of self worth absolutely cannot function if I am anything less than the perfect hero of my own life's story. Therefore, Emperor Palpatine is not only great, but has never said or done anything bad, ever.

And if any of you disagree with me, we can argue about it on Holobook until you get exhausted and give up.

So long story short: relax, chill out, take a chill pill, and see what happens! Unless you're a Jedi. Then you should turn yourself in immediately to the nearest clone trooper. But if you're not a Jedi, then chillax, amigo! After he takes care of them, I'm sure he'll find no other politically expedient targets for populist rage at all, ever, ever.