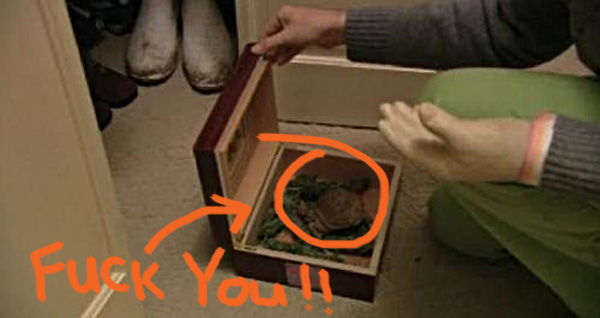 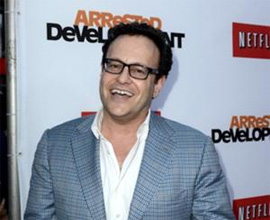 "Hi, I'm Mitch Hurwitz. The guy who ruined the thing you loved more than anything else in the world."ARE YOU KIDDING ME? WHAT. THE. FUCK? Why even bother at this point?

First I read that Steve Holt is not going to be on screen until episode six and now I hear from blue_myself75 that you will not even reference Buster's Turtle, Mother, in season four, at all. Full stop. We're down the memory hole on this fucking thing.

Do you know who I am, Mitchell? I wrote the Fox execs, I wrote the NBC execs, I wrote Comedy Central and HBO. I had a website for six years called Dwight Wright Writes Dwight Wright's Arrested Development Writing Site. Then as soon as I heard about the Netflix deal I started a change.org petition to officially recognize Motherboy Day as a holiday.

FUCK YOU Mitchell Hurwitz I will take a shit on the red carpet photo you signed for me and wipe my ass with pages from the cast-signed shooting script of Episode 218, which you wrote with Jim Valley. You're garbage. And you know where garbage belongs? In a toilet.

I knew as soon as I read there might not be as much Gob that you were fucking driving it into the ground.

Cash in or cop out? Where is the turtle, Mitchell? How about you post an AMA on Reddit and I can ask you why are you fucking everything up? First three seasons: destroyed. You actually managed to make them less funny with this BS.

There's FUCK YOUs in the banana stand, Mitchell. If Ron Howard were narrating my life right now they would fade out my audio and he would be saying, "Well, we can't play that on TV, but trust me, he had very nice things to say about Mitchell Hurwitz" and then zoom in on me writing I HATE YOU MITCHELL HURWITZ on a photo of your house I Google Streetviewed CUZ YOU'RE ON THE GRID, DUMBFUCK.

Here's all supreme bitch idiot Mitch Hurwitz thinks we need for a great episode of AD.Let me tell you a little something about comedy, Mitchell, since you seem to have forgotten it like crazy during those two years you were dildoing your own butt oh wait I mean show running Running Wilde right into a tree killing the careers of all involved.

*waves severed arm in your face* AND THAT'S WHY YOU ALWAYS PUT THE FUCKING TURTLE CALLBACK IN YOUR SHOW.

Jesus Christ. I don't even think I want to watch season four at all at this point. We all know it's going to suck. Everyone on all the fan sites have been saying it since it was announced that AD was coming back. You missed the window. You can't put the lightning back in the genie. Everyone knows it's going to be a shitshow of Michael episodes with a B plot of Maeby working at the movie studio. HEY GUESS WHAT: WE ALL HATE THAT SHIT.

Basically we want Buster and Lucille for A plot with a Gob B plot and C plot with Tobias and Steve Holt. You can include two short drop-ins (which we call hop-ons on the Mayoneggiacs forum) of either Barry Zuckerkorn or Bob Loblaw. That's it. That's how you do it. Thanks. Thanks alot, Mitchell Hurwitz, you colossal piece of fucking shit.