The Greatest Fights Of All Time 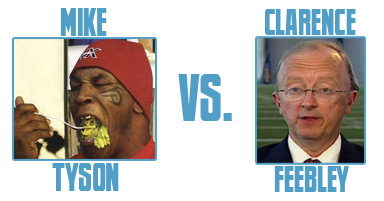 Mike Tyson had just been released from prison after serving a three year stint for aggravated jaywalking and attempting to sell incredibly inaccurate drawings of female genitalia to a minor. He was looking to restore his legitimacy as a pro athlete.

Clarence Feebley was a mild-mannered boxer with an 0-35 record and nothing to lose. It was a matchup made in heaven.

Tyson: "I'm gonna rape your children! I'll eat your pets! I'll upturn all of the potted plants on your patio! I'll take a polaroid of your wife's titties and have them tattooed on my forehead!"

Clarence: "Well, I thank Mike for this opportunity -" (Tyson screams "I'm going to cut everyone you love in half with a shovel! I'll replace your toothbrush with an identical toothbrush that I rubbed in my armpits!")

Tyson: "I have dedicated my life to peaceful inner refraction like my heroes Che Guevara and Chairman Mao. This fight will prove that."

Tyson came out strong, quickly establishing his dominance. He raped Feebley's children, ate his pets, upturned every last potted plant on his patio, took a polaroid of his wife's titties and had them tattooed on his forehead, cut everyone he loved in half with a shovel, then replaced Feebley's toothbrush with an identical toothbrush that he rubbed in his armpits.

In a move of desperation that would live on in infamy, Feebley punched Tyson in the abdomen. The two were immediately separated by the referee and Tyson was granted a victory by disqualification.

For the first time in his career, Tyson had public opinion on his side thanks to the deplorable actions of Clarence Feebley. Tyson parlayed this newfound popularity into a lucrative marketing deal, bringing a product he had been designing for years to fruition. His "Mike Tyson's George Foreman Grill" became the hottest-selling set of diamond-encrusted platinum teeth on the market.

Player 1 insert token, Player 2 insert other token. A match for the ages!

Chun-Li: "Tee-hee! Do you call yourself a fighter?"

Chun-Li: "I must avenge my father. If you stand in the way, it's your own funeral."

Blanka crouched in his corner, constantly electrifying himself. Chun-Li approached Blanka, then did a series of backflips off the side of the screen and kicked the air for a while in an attempt to flash her panties.

With three seconds left in the stalemate match, Blanka hurled himself across the screen and lightly kicked Chun-Li's ankle. Victory belonged to the beast.

War erupted in Bosnia and Herzegovina between Bosniaks, Serbs and Croats. Between 1992 and 1995 over 100,000 people lost their lives, and nearly two million were displaced from their homes.

As I labored on Where's Waldo puzzles for extra credit in my fifth grade social studies class (I didn't understand that one either), a kid who picked on me every day began kicking my backpack, which I had stowed under my desk. I asked him to stop. He grinned, then kicked it again.

I did the only sensible thing I could, springing to my feet and yelling "That's it! I've had it! You and me... after school!" in a whiny falsetto that somehow managed to come across twice as confident as I had any right to be.

I spent the rest of the school day shaking and wondering how many Band-Aids I had at home.

Me: "Mr. Silva, may I leave a few minutes before the bell rings?"

Me: "I think I need to see the nurse. My stomach feels weird and my asthma is acting up and I think I have poison ivy."

Me: "Do you need any help after school cleaning the chalkboard and erasers? What exactly do I have to do to get detention?"

As a growing crowd of kids shouted at us, the bully and I circled each other and exchanged mean looks. Every time he took a step toward me, I shrieked and kicked wildly. This went on for several minutes until a teacher came upon the crowd and yelled at everyone to stop what they were doing.

It's a good thing he took control of the situation like that, because as everyone quieted down a friend of the bully (who looked about 20 years old and was still in middle school) ran through the crowd with a bicycle chain in his hand and knocked me over, then beat me with the chain until the teacher pulled him off.

The cycle of violence was complete.

My mother pulled me out of the public school system and transferred me to a Catholic school, which was really the best solution given Catholicism's spotless track record with violence.

After the fight I developed an irrational fear of people who run at me with bicycle chains and other weapons in their hands. It has only gotten worse with time.

While wandering through the woods aimlessly one day, Bruce Lee happened upon a beehive filled with delicious honey on the tallest branch of a tree. Lee climbed the tree and stuck his hand inside the hive as he licked his lips with giddy anticipation, then yelped in surprise when he discovered a swarm of bees lived inside.

Lee: "I want that honey, stupid bees. Give it to me now! Give me that honey!"

Bruce Lee ripped off his shirt, revealing a chiseled body that was built to maim. He chopped his hands through the air at lightning speed but it was no use against the multitude of tiny foes.

Every single bee in the hive proceeded to sting him, but the joke was on them, for their stingers became anchored in his flesh. As they tried to fly away their intestines spilled out, killing or at least really freaking them out.

Lee laughed, his face swollen and his eyes nearly sealed shut. The honey was his! Stupid bees.

Lee got a stomach ache from too much honey. Stupid honey.