Album Review: Dark Side of the Bith 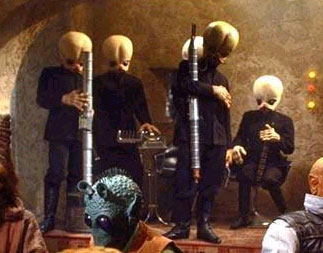 Figrin D'an and the Modal NodesAs a music critic, I receive a great deal of albums every month, usually from the same old acts that have all the energy and creativity of a burnt out star core. Yeah, there are new acts popping up constantly, but most are as fleeting as shooting stars. Music these days is a business of dead and dying stars.

The first time I saw Figrin D'an and the Modal Nodes was in a trashy cantina growing out of Mos Eisley, one of the many open sores festering on Tatooine's dismal surface. This particular cantina, owned by a Wookiee businessman with a degree earned through bashing things and then moaning in celebration, was known for its near inhospitable atmosphere. You'd have better odds surviving in an asteroid field. The one saving grace was the acoustics, which were unparalleled on all of Tatooine. The day I was there was particularly ruckus, as some backwards sand farmers came in and started a brawl over Arasuum knows what.

Figrin D'an and the Modal Nodes kept their cool and handled the incident like pros. These guys had seen it all, so some old beard chopping off an Aqualish's arm with a sword of light was nothing out of the ordinary, even if it did cause me to start a moisture farm in my pants. The Modal Nodes paused to take in the chaos and let everyone get a good look, then voosh, right back into "Mad About Me." All and all, the Modal Nodes put on a hell of a show. I couldn't help but feel like I was seeing the start of something big. What can I say? I was caught up in the moment. 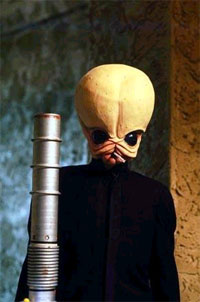 The magic these guys were wielding on Tatooine was long gone. Figrin looked blazed out of his mind. What he was doing with his kloo horn was nothing short of an obscenity. I wasn't sure if he was trying to eat it or vomit his guts into it. Either way it was nastier than a Sarlacc with thrush. When they played "Tears of Aquanna," Ickabel G'ont botched his Fanfar solo so bad that I felt embarrassed to even be alive. He used to be as precise as a droid, but here he showed all the grace of a womp rat fat on profogg meat.

It's no surprise given Figrin's tyrannical leadership and personal problems that the Modal Nodes broke up. The two galaxy's worth of ego these guys were cursed with finally outshined the galaxy's worth of talent they were blessed with. Nobody even noticed when the gravitational forces finally tore them apart. Most of the band went their separate ways, doing a disappearing act so absolute that it would make the Rebel Alliance jealous. Nalen Cheel was only too happy to go home to the swamps of Clak'dor VII. Tedn Dahai was no doubt relieved that he didn't have to play second Fanfar to Ickabel anymore. Doikk Na'ts had more free time to dedicate to being a pretentious choobie, and Lirin Car'n most likely fell back in with his underworld chums. I would be surprised if Tech Mo'r even noticed the band broke up.

It would be a crime to forget Figrin D'an's hilarious attempt at solo success under the name Barbarine. When I heard Barbarine's disastrous LP, I couldn't tell if I was listening to a kloo horn or an Ewok giving birth to a rancor. Upon first listen I heard a million voices crying "this sucks" in unison before being silenced under a carbon flush of noise. I thought maybe he was trying to perform warbat, so I played the album for an astromech droid and it started spewing oil out of its vocabulator. The temptation to report him to the Empire for launching a rebel assault against my ears was quite powerful. Some of my fellow critics even toyed with the idea of pooling credits and hiring Zuckuss to take him out. But then again, we really just liked saying "Zuckuss."

But here we are, sometime later, with the Modal Nodes vying for a comeback. Does anybody care? Does a band that burnt out in the shadows even deserve a second shot at stardom? As a regular guy, I'd say no. They had something great and they squandered it away. As a critic, I have to let the music do the talking. So the real question is: do Figrin D'an and the Modal Nodes have something to offer the musical world?

Amazingly, the answer is yes. 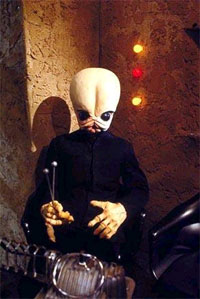 Figrin D'an himself is a transformed man. He's overcome his addiction to glitterstim, given up gambling, and found a renewed passion for performing. That Outer Rim magic is alive again, and more powerful than ever. The old jizzstar days of dodgy cantinas and playing for gangsters are long gone. Now it's about the music and only the music. I'm not ashamed to admit it - the boys from Bith are back!

On "Hyperline Hustle" the band is positively glowing, playing glitz as much as jizz, and creating a rich asteroid field of sound along the way. Toward the end, the whole track is washed out in a sea of scrak-like fuzz. Just when you think they've played themselves into a corner, Doikk Na'ts, inspired by some mad whim, starts playing his Dorenian Beshniquel over the fuzz like it was a Bontormian Klesplong. If a Jedi could wield his lightsaber with the same force this guy wields his fizzz, the Empire would never have gained power. My jaw was on the floor.

Another standout track is "Nova Cluster Blowout," where Nalan Cheel really shines on his bandfill. You won't believe the noises that are coming out of his ploong sounder. I swear he wired a droid's vocoder into that thing, because it had a mind and voice all its own. Still, he never once loses control as he carefully guides the wild sounds to all the right high points. He shows the discipline and patience of master nerfherder when shaping his sounds. Truly, Nalan used his time back on Clak'dor VII to hone his craft into something special. 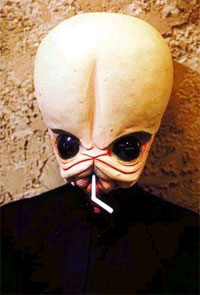 The band is scheduled to play the Weogar Music Hall on their home planet of Clak'dor VII in a few weeks before launching a pangalactic tour. If this album is any indication of what's in store, sellout crowds are all but certain. This is one of those few times a star deserves to burn again, and the light they shine on the music world is a godsend.

"Dark Side of the Bith"