You can guarantee that every table at every coffee shop in the city will be covered with hundreds and hundreds of printed out PowerPoint presentations. Despite wasting enough paper to account for ten percent of global deforestation, they will also hog every plug in the building to charge unused laptops. For every half hour studying, they will spend under ten minutes actually looking at these black and white pages. Whenever a few leave, another pack comes to take their place. Also, they will not buy anything.

Dramatically typing essays on subjects they are making up on the spot. Somehow still acting superior. Though they've had the entire semester to read, like, three books, they are now freaking out and frantically stretching already weak ideas to their logical breaking point. Finally, at five in the morning, after hours of sighing loudly in the corner hoping that someone notices them, the English majors roll their eyes so severely they pull a muscle. They quickly skim over their work and convince themselves that it's not gibberish. They're wrong.

Education majors prefer to meet in groups of four or more. They will carefully lay out books, handouts, and color-coded notes in front of them in a wonderful array only to immediately talk with friends. They will watch YouTube videos and laugh regardless of environment. People will glare and go a-hem or whatever, but the education major cannot be deterred from distracting themselves. Eventually one will ask how long they've been studying. "One hour," another will say. Feeling content, they leave.

If history majors still exist-and there is no proof of this-then they are probably alone frantically sifting through microfiche-if those still exist. In short, if you see one, congrats, you have wandered into the least used portion of the library and witnessed the world's most boring miracle.

Engineering study habits fit in two different camps. They either finished their work weeks ago, providing just enough time to be condescending or they are aggressively searching for a new major. They are both hated by everyone.

The shock of poor time management will send these students into a crazed Adderall fueled rage where, over the course of a week, they will slave over work that they hate but do not have the time to change. Consuming little food, less water, and no sleep, they vanish for large portions of time. Their fiendish behavior repulses human contact as their focus is shrunken down to a singular point. Eventually the constant cycle of hate/create/hate/create will overcome their body, resulting in three day crash. When they wake to submit their portfolio, they will tell their teacher that it sucks and then regret saying anything. They will then promise never do this to themselves again knowing full well that it is a lie. 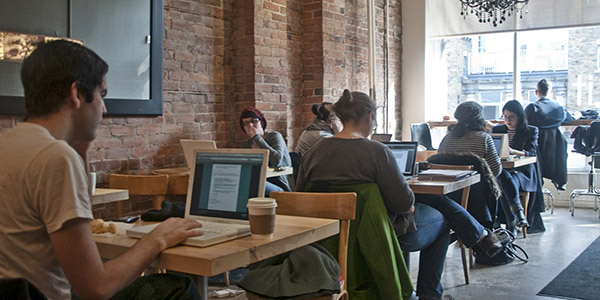 Seem pretty chill. No one really knows what they're working on, but the most accepted theory is that they're imagining some tax season roleplay that is both elaborate and boring.

Business majors say that they're feeling pretty good about their work, but there will be a secret group project that has spiraled out of control. Maybe their group members aren't contributing enough, maybe they're contributing too much, maybe the other group members decided to go with a blue folder instead of red. Regardless of the offense, the business student will unknowingly have their Type A tendencies flare up in unexpected ways. The final week of school is nothing but insufferable attempts at exerting dominance and control over their environment. They will attempt to negotiate library fines and micromanage the work of others.

Similar to the art major, these students are also likely to abuse Adderall to make up for missing work. However, instead of accomplishing whatever task they need finished by noon, they will clean their dorm room with an attentiveness that includes a box of Q-Tips and four bottles of Febreze. Then they will sleep through the final, resulting in a C- in Geology or whatever random class they registered for and then complained about all semester.

The science majors will be in a ring at the back of a science building , huddled around a lab that has painful florescent lights. One by one they will complain at great length over who has the hardest finals, not to share their misery, but to find out who is the best. Though it sounds like they are unhappy, the science majors secretly love it. They will revel in the number of labs they must finish, they will applaud each test required, and they will faint with pleasure over discussions of class averages bottoming out at 40%. Once the true, most hardcore sufferers are selected, they will be sent out into the normal world to tell their story to anyone who will listen. And when no one cares, they will just tell it to everyone anyway.

They end the semester like they began: Playing Minecraft.