In a sad bit of news, Sunday update writer Scotty "Manjam" Delbango recently passed away. Thankfully Scott died doing what he loves most: savagely attacking Indians in a vain attempt to protect our Constitution. His lifelong dedication led to him being banned from virtually every Native American casino and probably didn't hurt our country too terribly bad, either. We here at Something Awful will miss Scott very much. He died long before his time, even if he did drag a lot of Indians kicking and screaming to Hell with him.

To help ease the pain caused by Scott's death and also to carry on his memory, Scott's twin brother, coincidentally named Scott, has agreed to take over Scott's weekly Something Awful writing duties. Scott's legacy will live on in each of Scott's future posts. Welcome to the team Scott! Let Scott's strength carry you to greatness, Scott! 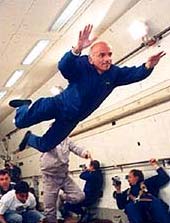 The first tourist to visit space was gifted with the amazing ability to fly!By now you've already heard the news that an African man has successfully completed the steps necessary to go from being on the planet Earth to not being on the planet Earth. Mark Shuttleworth, a native of South Africa, paid the $200 fee requested by the Russian space program, and is now hobnobbing it up with the sexy men and women of outer space! His voyage beyond the atmosphere, Earth's celestial condom, has earned him the right to call himself an "Afronaut." Shuttleworth is also only the second space tourist ever. Unlike the last space tourist, who spent all his time astrobating, Shuttleworth apparently plans to spend his time doing research on AIDS. I think that means he's going to infect the other crewmembers, but I'm not sure. If he was smart, he would work on finding a way to harness the destructive power of AIDS in the form of a beverage. All I know is that I want a beverage I can confidently recommend to my worst enemies.

To be perfectly honest, I was really excited about an African making his way into space. Unfortunately, in a twist of fate so pretzel-like it would make our president choke to death, the first African man in space is white! Don't get me wrong; I don't have anything against white people. I mean, as long as they don't bother me I won't complain. Hell, some of my best friends are even white! It's just that I had roughly ten million inappropriate and offensive joke opportunities all lined up and ready to go. Sadly, these jokes were dependent on the first African in space being black. Now I can't say that he's up in space stealing stuff, or that the only reason he got into space was because he tried to carjack the space shuttle. I can't even make jokes about the slave trade going galactic! I suppose this is for the better, since I've already insulted Indians, Russians, and AIDS sufferers. I guess I just got greedy.

As I briefly mentioned before going off and indulging my dangerous far-right beliefs about minorities and other nations, Mark Shuttleworth is the second space tourist. He certainly won't be the last, either. Technology and financial desperation is paving the way for more space tourists to take that giant leap. Soon all the world's millionaires will be making that fantastic journey into the heavens, leaving us whelps to dwell on the Earth. I don't think I even need to mention that this is the very same Earth that Buster Poindexter still lives on, either. This will probably lead to the establishment of exclusive cities in space where the wealthy elite will live. If the wealthy elite leave Earth behind, that means that the money will eventually leave Earth behind, too. This can only lead to surface society degrading into a visually appealing but generally unlivable hellhole. Kind of like France is now! 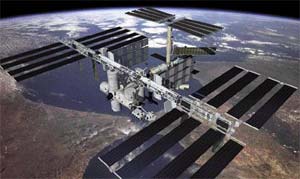 Guests of outer space stay in the luxurious International Space Station! Also, there are no bathrooms in space.When we are stripped of opportunity and money, and denied the really cool outer space jobs, we will eventually begin fighting with each other. Sure, it might start out innocent, like a casual poking and a spirited battle cry of neener neener neener, but it won't take long for this casual poking to escalate into angry stabbing, or perhaps biting, and ultimately to killing. The subtlest differences in behavior and appearance will lead to giant social and cultural rifts dividing people like the Great Wall of China once divided Berlin. We're talking the kind of world where left-handed people are at war with right-handed people, leaving the much-hated ambidextrous peoples to live in fear or lead dangerous lives as spies. And all because rich people want to leave this planet to live in a hallow abyss as empty as their souls! On the plus side, we may finally get rid of Lance Bass.

Of course the only way we'll ever really know where this is going is by letting time pass and then reacting to said passage of time in a savage and uncontrolled manner. Remember, the future is unknown, and we should always approach the unknown with fear and hatred. In the meantime, we can concentrate our energies on hating everyone with the money to venture into outer space. But who knows, maybe that crazy Afronaut will even research some cool new uses for AIDS, like some kind of AIDS bullet that infects people it hits with AIDS! That way you can shoot someone and it isn't murder, because they died of a disease!