Rebels attempts to be a stealth-based real time strategy game from the perspective of five idiots trying to escape from prison, but it ends up being just like playing Diablo while squinting and hitting alt-F4 every ten seconds. More than anything else, this game raises disturbing questions about the design choices made by “Philoslabs” and other fine budget development studios. Why does level one load quickly while all the other levels, which are roughly the same size, take at least 20-30 seconds? Why does a game with a handful of tiny character models and a total of six levels require two discs? Why did they decide to release this shitsplat when all it does it briefly assault you with ugly, broken gameplay and then periodically decide you’d rather look at your desktop icons? These burning questions would drive me insane if I hadn’t recently taken a vow of not caring about them.

This is what half your playtime will be spent looking at. The other half will be spent staring at your desktop.I really don’t know what to say about the gameplay, which is every generic “stealth/action” title rolled into one and given a third-person overhead perspective for added tedium. In Rebels you take control of some guy in prison and attempt to escape, starting by walking through your unlocked cell door. You eventually meet up with a few of your comrades, which I was only able to do by speeding through each level quicksaving every three seconds. Each of these characters has his own special abilities, which vary in a number of ways but are linked by the common thread of not making any sense.

Punch: This seems like a sudden and violent way to surprise a guard and incapacitate him before he has the chance to sound the alarm, but the truth is much more polite. All you do to knock the guard out is casually walk up to him and make a slow wiping motion with your hand, and depending on which way he’s facing, it looks like you’re either giving him a back rub or trying to determine how cold it is outside by feeling his nipples. If you approach from the side and use it, the guard slowly turns to face you and stands there motionless while you rub him into unconsciousness.

Feign Death: This technique allows you to swiftly defeat your foes by cleverly falling on your face, and in the game’s own words, “giving the enemy a morbid surprise.” When a guard discovers one of the prisoners lying in the middle of the floor, he does what any well-trained guard would do – he walks up to you and sticks his face near the floor to get a better look. This gives you the opportunity to give him a light tap on the side of the head, which makes his neck noiselessly break. But don’t worry – you can only use the neck-break when feigning death and there’s no way to do it normally (or even to a knocked-out guard) so it’s not like this seemingly logical attack ruins the whole “making no sense” atmosphere. And if you Feign Death when a guard has already seen you, he’ll pull out his electric zapper and kill you, at which point you’ll casually stand back up and then fall over again. 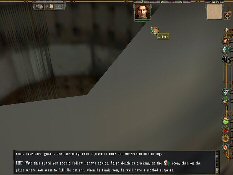 My view of this alleged door is blocked by a mass of grey glitchy crap, courtesy of Rebels' excellent camera system.Sneak: This banjo-legged stumble is supposed to protect you by muffling your footsteps. However, all it really does is slow you down, since the guards seem to hear you just fine whether you’re using Sneak mode or not.

Don’t worry though, it’s not like you have an army of intelligent enemies to outwit with these wonderful abilities. The guards are only capable of walking back and forth in a preset pattern and scanning for any wayward prisoners with an incredibly narrow cone of vision. Their hearing is pretty good, however, and a number of the guards around corners possess the uncanny ability to recognize you as an escaped prisoner by the sound of your footsteps and sound the alarm without ever seeing you. But their downfall is their incredibly bad short term memory, which allows you to constantly Feign Death and move yourself along a hallway whenever the patrolling guard turns his back, and you never have to worry about him realizing that the corpse in the middle of the floor is moving down the hall. If that doesn’t work, feel free to use the Punch whenever the guard realizes you’re not dead, since you can knock out the same guard over and over, and every single time he wakes up he’ll simply get up and calmly go back to patrolling.

This review wouldn’t be anywhere close to complete without mentioning some of the bugs, since the gameplay consists of 70% bugs. The other 30% consists of waiting through load times and swearing. 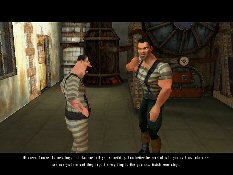 Blake gets some advice from a fellow inmate who got booked on two counts of Illegal Possession of a Coffee-Pot-Shaped Head.

The camera, which hates you personally and spends the whole time swinging behind solid objects to piss you off, will sometimes glitch out if you try to rotate it too fast. When this happens the viewpoint will start swinging around in circles with no apparent way to stop it, and I have no idea how long it lasts because I quit the game all three times it happened.

Alt-tabbing out and back in will sometimes cause the game to minimize and pop up with an invisible window that shows up in the taskbar as “Error.” Trying to restore the game again will cause the invisible window to reappear, disappear again and change its title to “Microsoft Visual C++.” If you make a third attempt to restore the game, the title changes back to “Error”, it flickers for a second and then the game crashes. This ties with the “walls kill you” glitch in Tsunami 2265 as the most fucked up bug I’ve ever seen.

The game will regularly fail to register mouse clicks, meaning you have to click each action repeatedly to make sure the game understands it.

The game frequently decides to crash to the desktop whenever it feels overworked from providing more than ten seconds of crash-free gameplay.

Whenever I exit the game (but not when it crashes) my DVD drive disappears from my hardware list and my computer refuses to acknowledge that it exists until I reboot.

I made a valiant effort to wade through the sea of crippling bugs so I could offer an in-depth review, but in the end the bugs, which occurred on both machines I tried to run it on, soundly defeated me through sheer weight of numbers. I apologize to you, the reader, for not having the intestinal fortitude to battle my way through this mess and give you the meticulous, detailed analysis you deserve. It appears the mystery of Rebels will remain forever unsolved, but if it’s any consolation, I don’t think you’re missing out on much.