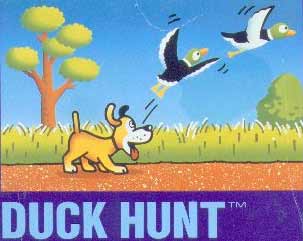 Imagine a world where we can't even try to shoot the damn dog in "Duck Hunt." Are you done imagining? Good, because that's a horrible thing to spend a long time imagining.Each day my friend and mentor, Mr. Television, reminds me that I live in a hellish dystopian world that's not really worth living in. I don't exactly need to explain why, as I'm sure all of you have seen the captivating images of various things and people exploding for causes both stupid and really stupid. This isn't anything new. Well, the explosions might be new, since explosions weren't invented until the Industrial Revolution. Plus explosions don't last long, so you can't really say that one particular explosion has been hanging around forever. Unless you're referring to the sun, in which case you've bested me and won this game of wits. The concept of being stupid and contributing your stupidity to the grand cause of ruining Earth for everyone has been going on for as long as man has been alive. It's quite possible that even the dinosaurs did the same thing, but we can't be for certain since God took them to heaven before we were ever born.

Everyone has ideas about how we can improve life and make the world a more satisfactory place to dwell and eat mashed potatoes in. Politicians base their entire careers on telling us how they are going to improve our world, our planet, and give our children something worth inheriting. Unfortunately this is going to lead to major problems, as everyone concerned with improving the quality of life isn't thinking about the consequences. Sure, they might argue that it is exactly those consequences that they're thinking about, but that's only mostly true. Every good thing carries at least one bad thing with it, kind of like a flying squirrel with a little tiny saddle glued to its back. What's riding on that saddle? If you ask me, the only thing that would ride on the back of a flying squirrel is trouble, and trouble is no friend of mine. Furthermore, flying squirrels are largely a myth, and since they represent all that which is good, so too is all that which is good. Score one for logic!

To further subvert the good intentions of the general populace, I decided I would come up with five ways to easily degrade the quality of life for everyone. Not surprisingly, my ideas on how to make life worse were consistent with everyone else's idea on how to make life better. No, it's not because I'm a pessimist and jerk. It's because I have the unique ability to forecast the downsides to every up, even while sideways or upside-down standing on my head. Unless you live in the Matrix or own a timeshare in the Matrix, you won't be able to dodge these bullets!

Plant More Trees
Good side: If there are more trees, there is more fresh oxygen available for you to enjoy. Having more oxygen to partake of is just one benefit, though. With more trees, there are more habitats for animals, more lumber to build Trojan horses with, and more abundant scenery. How can you go wrong with more trees?
Bad side: Yes, trees do mean more oxygen. This would be fine, but oxygen isn't just the very air we breathe and slosh around in; it's also a cable channel, and a shitty one at that. Oxygen is yet another one of those channels for broads, which means that it's full of the same kind of emotional nonsense meant to empower women that makes us all love and honor the Lifetime channel so very, very much. It was bad enough with just Lifetime on the air, but now we have two stations dedicated to women? If we give them TV channels, it's only a matter of time before they expect voting and literacy rights. Besides that, the only people who watch these channels are women planning on murdering their husbands. Last time I checked, murdering your husband is wrong, unless of course you're married to Hitler. Given the linear flow of time and his death, getting married to Hitler is extremely difficult these days. Hitler aside, cable TV is meant to bathe us in quality programming and interesting shows, not sap the precious testosterone out of our bones. With no trees, there is no oxygen and thusly no one alive to run the Oxygen or Lifetime networks. Everybody wins! And really, there is probably such a thing as too much photosynthesis. We don't want to beat a good thing into the ground.

Ethical Treatment of Animals
Good side: It is often argued that hurting animals for purposes of sport, psychotic fun, and product testing is both wrong and cruel. It almost makes sense, because if you were a goat, would you want somebody spraying shaving cream in your eyes? Unless your eyes were particularly hairy and in need of a good shave, probably not.
Bad side: If we can't harm animals, how will we ruthlessly slaughter cows, pigs, and horses for meat? It's impossible, unless we wait for them to die of natural causes. That would make us equivalent to vultures, and they're widely regarded as assholes by most bird experts. Besides that, if we can't harm animals, what the hell do we harm? Robot animals? Pictures of animals? Furries? I guess the only bad side to this is us having to eat furry meat, the most plentiful source of blubber and lard on the planet. Be sure to roast your furry well, because there is nothing worse than the taste of uncooked shame.

No More Pollution
Good side: We won't choke to death when we open our mouths to suck air into our lungs. This means longer life spans, healthier living, and cleaner skies.
Bad side: Important industries will be crippled, leaving millions of people without jobs or lower wages. Most of our factories are old and it would simply cost too much to upgrade them. Thusly, the only way of eliminating pollution is to shut down factories or force them to upgrade at the cost of their employees. As a resident of Northwest Indiana, one of the most polluted areas in America, I personally enjoy the rusty flavor and thick smoggy atmosphere. I can't imagine living in a world where I don't have to claw my way through the thick, dirty air. That's the only exercise I get!

No More Disease and Sickness
Good side: People stop dying of things like cancer, AIDs, and Super Bowl Fever. Ultimately, this means we have a lot more people and less suffering to contend with.
Bad side: With more people alive and healthy, you can bet we will have longer lines at supermarkets and shopping centers. Really, is it such a bad thing to sacrifice a few people to the cause of shorter checkout lines? I certainly think so, because I have better things to be doing with my time. In particular, I would like more free time to write threatening, unprovoked letters to random people in the phonebook. 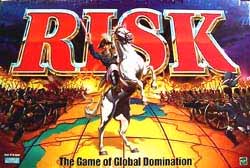 Risk is based on war and it's a fun game. How can war really be all that bad?

No More War
Good side: The pointless grudges and differences that constantly seem to cause us to take up arms against each other will no longer exist, freeing us to pursue knowledge, the arts, and terraforming the moon.
Bad side: Sadly, with a permanent moratorium on war, there will be far less unnecessary death and brutal violence. While that's sort of a good thing, it means that we will again be left with far too many people here in America. To make matters worse, militaries will be useless, and so lots of people will be out of jobs. The most aggravating factor related to a lack of war will undoubtedly be the rise in demand for parking spaces. Because of the increase in people living on delicious American soil, more parking venues will be needed. All of this means that I will have a hard time finding the perfect parking spot, otherwise known as "The Money Spot." Good parking options are important to everybody, so there is simply no viable alternative. We have to keep war alive. It's just more practical, because after all, the more land we conquer, the more places we have to park our cars.

It's pretty obvious that if we want to better the world, we are going to have to come up with some better ideas. Purging the world of disease, pollution, war, and all things bad is only going to lead us into a nosedive descent so insane the very foundations of insanity will be rocked like a maddening hurricane. I don't think any of us want that, although it certainly would be entertaining to watch.