I Address YOU, the Valued Fouke Customer

Ah, do not fret, for beloved Philip, star of the Fouke Family, has yet to fully depart this mortal plain. Nay, he rests in a stupor quite well earned. Doctor F. Gerald Thornton labors at his side, constantly sponging the fresh seep from his engorged cranium.

The details of his ailment I shall not toil upon, suffice it to say that his boney helmet is under considerable strain, undoubtedly the result of some new and ever more ghastly tumor. His head has swollen such that it eclipses even the hardiest of pumpkins. Right now, the good doctor assures us, Philip's frame is scarcely able to contain the vast volumes of integrity that vex him so. Were he conscious, the doctor surmises, Philip's integrity would overwhelm us such that we would all die instantly out of respect. 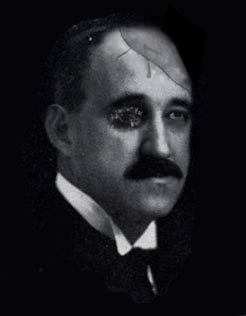 P. B. Fouke, prior to his most recent medical episode.The poor Mr. M. J. Duddy, esteemed manager of this operation's shipping and receiving department, remains locked in mid-handshake with Philip. The two were in the midst of a rather spirited shaking of paws when Philip suffered his most violent seizure to date. The loyal Mr. Duddy held on for dear life throughout the frantic fit, unwilling to let go of his commander. Dr. Thornton insists Mr. Duddy's grip remain intact, fearful that even the slightest change might harm Philip's condition irreparably.

The wise men of this enterprise, having suffered the consequences of poor leadership under the grotesque Captain H. W. Grieves, believed that the Fouke Fur Co. should remain under the domain of a true-blooded Fouke. As Philip's oldest is still but a boy under law, it falls upon me, Cousin Eugene, to take the reins. I assure you, young trapper or shipper: This is a task I relish!

Any man acquainted with me knows that I have two passions in life: the unabated consumption of meat, and the absorption of capital. Some of you loyal trappers and shippers might argue that I lack the qualifications or intimate knowledge of this trade. You need not fear, for I speak the language of business as well as any learned man. Philip might have excelled in tormenting me as a child, turning my rotundity into a subject of ridicule, but I was no weaker or less intelligent than he. In fact, of the two of us, it was always I who was most attentive to his studies.

A re-examination of the enterprise

This new venture has come with its fair share of surprises and upsets. Here is a business that bears the scars of a beleaguered mind. Poor, poor Philip, spared no indignity by the Lord, has suffered an endless barrage of medical ills that have left him scratching and yelling at the air and trees. Finally, now, he rests in a slumber, perhaps never to awaken. And Cousin Eugene, once the butt of so many escapades, must pick up the pieces and maintain the Good Family Name. I will not bother to feign even the slightest surprise at this turn of events.