It's that time of year again, when the brilliant, unheard literary voices of our generation finally shout to the heavens "This is me, world! Peer inside my soul!" That's right, it's National Novel Writing Month! If you're unfamiliar with the concept, it's when thousands of self-motivated (and soon to be self-published) new writers all agree to try to write a novel in one month. I know what you're thinking - a whole novel in one month?! And a week has already passed! Well, don't worry if you missed the train - with some extra effort, you can still make it to the next station on time. Put your best iamb forward (little literary joke, there!), and soon you'll be on your way to being the next Cory Doctorow! 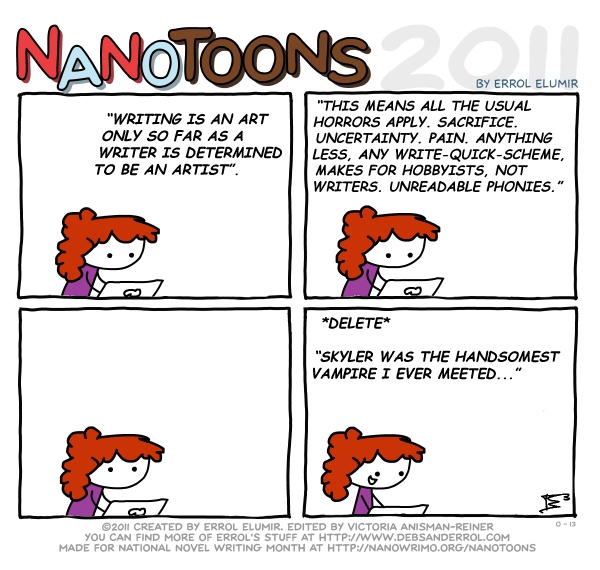 As a remarkably famous hard sci-fi/medieval-fantasy scribe myself, I know the task is daunting. There are a lot of pitfalls along the way, so I’ve thrown together a few tips to help would-be authors put the most into their debut novels.

Your characters are the backbone of your story. Without understanding your characters’ motivations, readers will find your story implausible and unrewarding. You need to make your characters interesting, but not so much so that they seem far-fetched. A good rule of thumb to remember is that even in literature, no one is perfect. Your characters, even your protagonist, should have flaws with which they must contend. Take this introduction from my recent tome The Harlot’s Scream, for example:

Gall Drazkan was undoubtedly alluring. The way his trench coat hung on his frame, just loose enough to keep his enemies guessing as to whether or not he was wearing his tac-vest – though he always was – and the way his Oakleys covered his eyes, leaving would-be attackers unsure if he’d even seen them; these things fostered an air of mystery around him. But his fortress was one of solitude – no woman was brave enough to approach him, unaware that within that hard exterior was a heart waiting to be thawed. No woman, that is, until she sat down at the table with him.

Note how the author projects an image of such a strong character – perhaps too strong for his own good. His brilliant mind is not easily penetrated by feminine wiles. There are probably hundreds of women who are attracted to him, but they can sense Gall would not fulfill their illogical emotional needs. 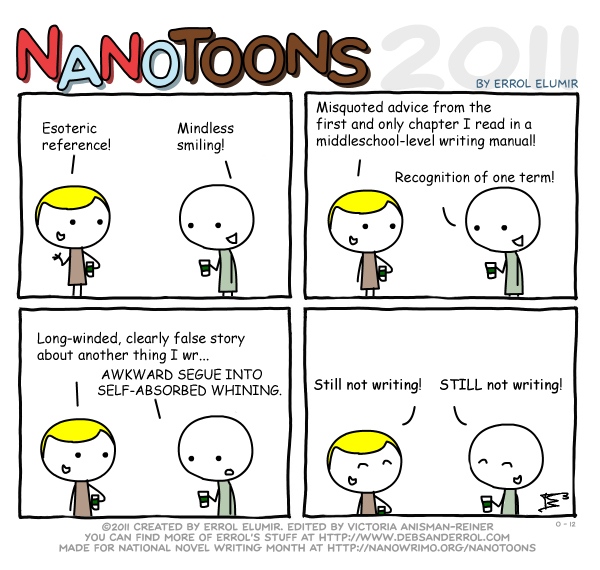 Of course, even the best-conceived characters aren’t dynamic unless they have something to do. A good writer knows how to devise a plot that fits together like a puzzle. Things might not seem to make sense at first, but when the pieces start to fall into place, the reader should be able to get a sense of where things are going, but without ever seeing the full picture.

Because you’ve got to get your novel out in a month, it might be better to try to write a fun, adventure-filled novel instead of the next Ulysses. Take a cue from George R.R. Martin’s Game of Thrones: Martin’s deep, complex mythology gives the reader something to delve into, so he doesn’t need to devote time to cheap “riverrun” tactics in an attempt to convince readers that they’re reading something worthwhile. The history of a made-up wonderland of swords and bosoms is right there on the page! And because the novels are so expansive, the plot isn’t confined to one simple story – deceptions are uncovered, personal tales interlace, and as the reader progresses further, he finds himself at a place never foreshadowed in the beginning of the book. A good plot unravels slowly, like a book-onion.

My latest e-novel, The Independence Engine, begins with the main character, Jarrid Wraithfield, on a quest to find the spare sprockets needed to finish the titular machine. But along the way, he finds himself beset on all sides by danger and deception. Eventually, he discovers a vast conspiracy singularly focused on preventing him from completing the Engine. As the plot expands, the reader finds himself more and more drawn in, unable to close his laptop or turn off his tablet, because he has to know what happens next. I don’t want to give away too much, but you can find the novel in .pdf or a locked .odt on the Pirate Bay. I accept voluntary donations in BitCoin only.