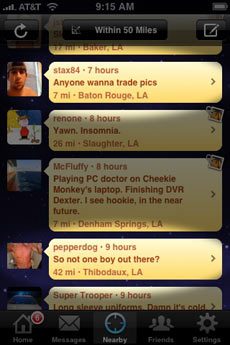 What the developer says it does: "Discover interesting people near you and around the world. Connect and send messages and pictures to new and old friends. Update your Twitter account if you have one. The most active social network on the iPhone with millions of messages sent already. All with Twinkle, the location-aware network for iPhone and iPod touch."

What it really does: It works just like Twitter, but also shows you what people near your location are posting, bringing a whole new world of personal status updates from gross Internet people you don't care about to your attention. All I've learned this weekend is that some girl a dozen miles away has seen Twilight a few times and this other guy sleeps way too much for his liking. Oh, and one local dude showed me his clothed boner and I didn't even say anything to him to provoke it. It was pretty much out of the blue, I swear it.

Bottom line: Using advanced GPS technology, Twinkle turns your iPhone into a Star Trek-style tricorder. Unfortunately, it can only locate the positions of guys who want to come over and jerk it with you. 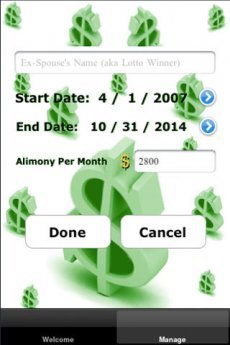 What the developer says it does: "For all those people out there that wanted to download this application, but just couldnt bring themselves to spend another dollar on divorce, great news Alimony Counter is now free !!! BTW, my own alimony was the inspiration for this application, and the default values if you do not change them ! "

What it really does: Provides developer Twain Martin with a passive-aggressive public jab at his supposed no-good whore of an ex-wife. Booya!

Bottom line: Highly recommended download, not so much for the program's functions, but to remind yourself that no matter how bad it gets, at least you're not staying up until 3 in the morning programming an alimony counter for your cell phone and pumping your fist ever so slightly when you think about how sweet it's going to be when that slut Debbie googles your name and sees it (after she gets done banging a better-looking guy and enjoying your hard-earned money). Bitch. 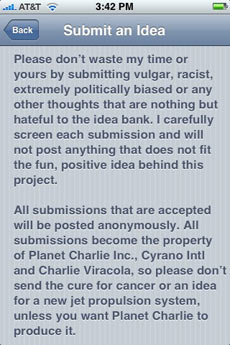 What the developer says it does: "The Planet Charlie 'Idea Bank' is a fun, interactive app that allows people to read and submit funny, original, positive, 'change the world' ideas from their iPhone or iPod touch. It is sponsored by comedian and philosopher Charlie Viracola's famed Planet Charlie project."

What it really does: Sets your phone on a collision course with the starship Groan in the Reused Observational Joke Nebula. Strap yourself in as chopped and screwed bits of material from better comedians is again shoveled into your face using a novel "If I had my own planet" format that feels vividly like something a 6th grader whose parents were recently divorced would daydream about during class. On top of that, Charlie wants ownership of your jokes, too.

Bottom line: I guess if you ever wanted to have about 20 or so "observational" jokes at hand and didn't feel like memorizing any, or saving a text file full of jokes, or bookmarking a web page, or just not requiring a database of bad jokes you horrible nerd, then Planet Charlie might be for you.