Both pilots you say? Go ahead and give them a nudge or a sharp kick. Most of the time when they sprawl on the cockpit floor with their tongues hanging out like that they're just pretending, joking around. No, they're really out? Looks like I'm going to be talking you through this one.

You're a brave passenger for stepping up at a time like this, but let's save the platitudes for later. Right now I need you to take a seat. Grab the controls, and start turning to the right. Hard. Let me know when you hear a click... yup, there you go. Pull the whole shebang straight out. Now that the fax machine is no longer obstructed, you should be able to see the liability waiver I'm sending you. 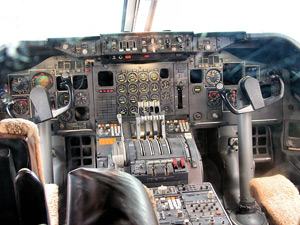 Oh, it's just the usual stuff. Go ahead and sign it, then fax it back to the provided number so we can continue. The second fax, that's a citation for operating an aircraft without a pilot's license. I don't need a signature on that, it's your copy. The bottom of the ticket should tell you where to send your payments.

Okay, good. Everything appears in order. Now we can get down to business.

Take a seat, and look at the instrument panel. Yeah, there are a lot of buttons and whatnot. Don't get overwhelmed, I'm here to help you figure this stuff out. Let's start with an easy one.

There are twenty dials in the center of the console, arranged in a rectangular grid. Directly next to the second one up on the lefthand side is a bank of buttons. The unmarked button in the center is what you're looking for. Should be grey. Got it? Okay, that's your Presets button. I want you to hit that until you get to a classic rock station.

I know, I know! It's crazy that they're playing Nirvana. Makes me feel old too.

Now I need you to find a black sphere that's bolted on top of the console. Should be on the co-pilot's side - yeah, that's it. What's the readout say?

"Reply hazy, try again"? No, no. The other readout, on the back of the sphere. Should be a number. Eight? Shit, eight. Wasn't expecting that.

No. No need to worry, you're doing good. This next part is very important, though, so I'm going to need you to pay close attention and act quickly. In between the seats there's a big panel. Lots of LED buttons and toggles. Somewhere in there is a yellow flipswitch, almost like the kind you flick to turn on the lights in your house. Yeah, there you go. Start from there, and in an ever-expanding counterclockwise spiral count every button until you reach 138. You might run out of buttons. If that happens, go backwards along the path you made to get there.

Got it? Yeah, it's the novelty-sized green button. The only one in the entire cockpit. Oh, that's a good point. It would have made it a lot easier if I had asked you to find the blinking orange button and picture it in the center of a swastika, then told you to find the outermost button in the elbow of the third arm. I'll remember that next time.

I need you to push that button. Yeah, I imagine it would make a lot of noise. You just jettisoned all 366 passenger seats along with your landing gear to conserve fuel.

No need to cry, you're in great shape now. Keep it together! We're almost there! 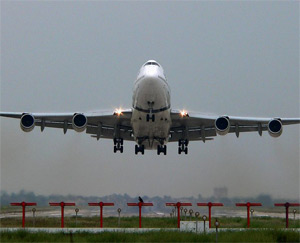 All right, good. Calm and deliberate. That's how you get through situations like this. See the orange dial directly in front of you? Rotate it 45 degrees to the left then hit the toggle below it. Now pull back on the thing that looks like a shifter in the center console. All the way. Good. You should hear a beeping sound... yes, it's coming from that tiny screen. Looks like Matthew Broderick's computer from WarGames. Use the keyboard directly below it to enter the following:

Wait for that to process. Let me know what the screen says as soon as it's done.

3:47? Okay, good. That gives me thirteen minutes until I clock out. Got that new World Of Warcraft expansion waiting for me at home.

This next part is the last, so buckle up if you haven't already. Kid, I don't want to get sentimental here but you did me proud. I have faith in you. You can do this.

There's a panel labeled Autopilot just above that screen you were looking at a moment ago. Yeah, there you go. I want you to close your eyes, say a prayer, and press the button labeled "Takeoff" with all of your might.