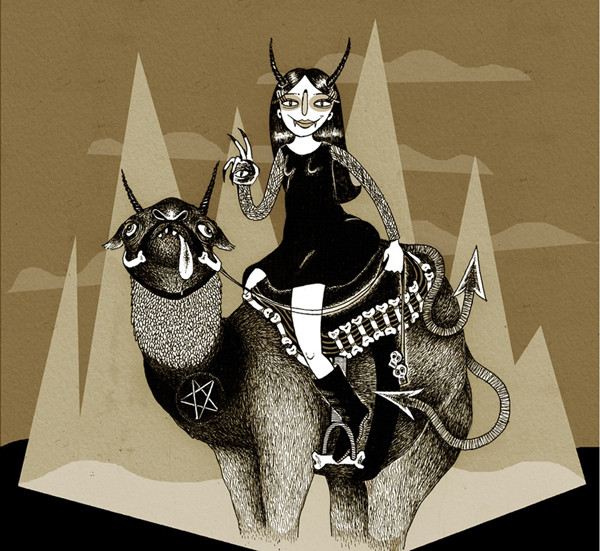 Justin watched Lindsey walk down the path from the apartment building to the parking lot. She was wearing a black dress, cobweb stockings and black boots. She was holding a DVD. It was almost night and the streetlights had turned on.

Justin closed the blinds and swiveled in his chair toward Brad, who was slumped over a table covered with takeout boxes and mail.

Justin opened a Berry Bop. "Gremory, a Christian demon. He appears as a beautiful woman riding a camel." He sipped. Soda dribbled down his chin onto his shirt. "I think Lindsey is Gremory."

"Oh, Gremory." Brad picked up an envelope that said "Fantastic Savings" and examined it. "She probably is."

"Seriously." Justin put the bottle on the windowsill and belched. "Lindsey's seductive, right?"

"And she rides a camel, right?"

"And your favorite thing to do is cuddle, right?"

"What does that have to do with anything?"

Justin sipped his Berry Bop. "Gremory seduces women. But he might settle for a really effeminate man."

"You're an idiot." Brad got up and walked into the kitchen and turned on the light. He filled a pot halfway with water and set it on the stove. Justin leaned back and stared at the ceiling.

"Even if you're right, it doesn't matter," Brad said. He turned on the stove. "Lindsey and I are done. We had a huge fight today."

Brad put some noodles in the pan and stirred them with a fork. "Her last boyfriend. Any time she mentions him, I feel tense. He reminds me of my least-favorite character in Nightbreed."

Brad dropped the fork on the floor. "Yeah." He picked it up and stood in the doorway.

"I just realized ... she still has my Nightbreed DVD. I'll have to call her tomorrow."

Justin sat up. "Are you sure that's a good idea?"

Brad rolled his eyes. "Will you stop the demon bullshit? Lindsey's a normal person. She just has trust issues, bad taste in music, annoying friends, no boobs, and today she downloaded some app that fucked up my iPhone." He stepped back in the kitchen and turned off the stove. "That's all."

Justin didn't say anything. He stared out the window and drank some more Berry Bop. 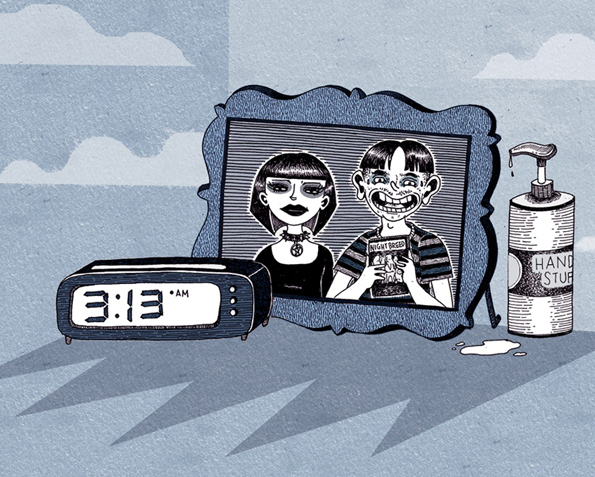 Brad tried to sleep. He twisted back and forth between the sheets, but he couldn't get comfortable. He sat up and looked out the window. There was a full moon surrounded by black clouds. A ShadowChrist and the Digitones song distorted by the Doppler Effect floated up from the street.

He shut the window, then sat on the side of the bed, resting his head in his palms. His clock read 3:13. He looked at the picture of Lindsey on the bedside table. Pallored by the moonlight, her face resembled a Kabuki mask, her skin ivory-white, her lips and eyes raven-black. Brad was standing next to her, holding his Nightbreed DVD. They were both smiling.

Brad reached for the picture, then hesitated. He took his laptop off the floor and turned it on.

He opened Lindsey's LiveJournal profile, which showed the same picture. He opened another window and did an image search for "demon." He opened several of the pictures in new windows and cascaded them with Lindsey's.

He stared at the screen for a moment. Then he took his phone off the table and dialed.