Congratulations! You've successfully accessed Meme World (formerly known as Internet!) And you've probably already realized it's not the infinite repository of learning that we'd been promised. Then again, when radio and TV started, they told us they'd be used for educational purposes, and now we're listening to hyper-compressed computer fuck tunes and watching reality shows about people who should have been buried alive. Anyway, the hot topic "on line" these days is memes. And now you can bring all your favorite Meme World memes into the Real World, in product form! 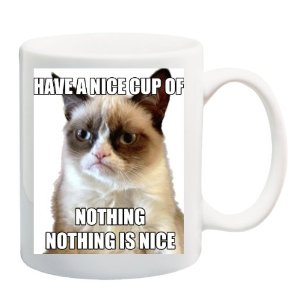 For any readers who are newcomers to cool future talk, a "meme" is a ready-made picture onto which you can insert your own text, as a variant on a pre-written theme. Or you can just pass around memes that already exist! Meme World is an egalitarian system in which every participant is welcome to add his or her own flavor to the urinal of existence.

Take, for example, this Unofficial Grumpy Cat mug! Did they license the cat picture from the cat owners, or even ask for permission to use the derivative "meme" that came from it? No way! Just save the file off Reddit, slap it on a mug, and count your stacks. You don't even have to make it look like the image bends around the mug if that seems like too much work! Meme World can be very forgiving that way. 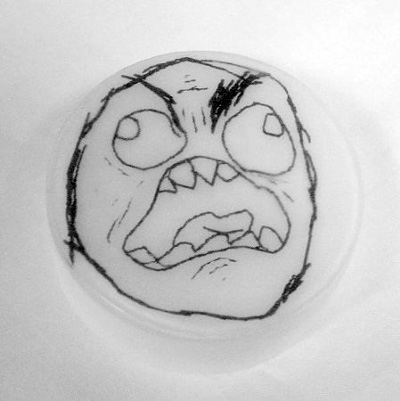 How about "FUUUU Meme Soap"? It's an MS-Painted face that replaces a written expression of anguish, for use by the illiterate. It is "Frequently Bought Together" with "F&%# That S!@& Meme Soap", because using someone else's artwork for profit is fine, but using curse words is NOT okay in Meme World. That's another one of the rules. No cursing, because that is fail, and not win at all. 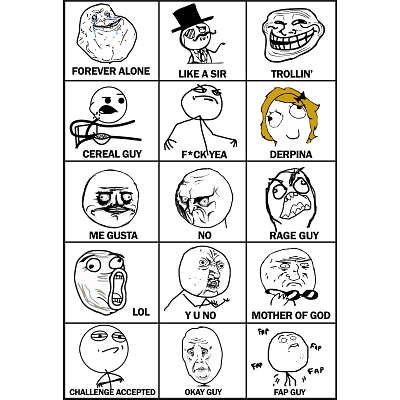 If using just one Meme Face isn't enough to satisfy your emotional-expression needs, why not pick up a poster of all the different emotions? You can hang it on your wall and point to the different faces. There's "F*CK YEA" for when Mom brings you a great mac & cheese, and the "NO GUY" for when Mom brings you a bad mac & cheese. There's even a girl face! Who says Meme World is only for us guys? 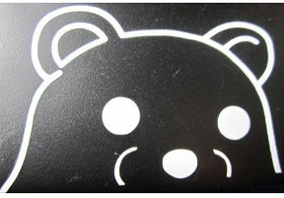 And don't think Meme World is just for kids, either. It's also for adults who like to fuck kids! One of the favorite characters in Meme World is Pedo Bear, which is the Meme World symbol for having sex with children. "EPHEBOPHILES!!!" you'll scream, as the police drag you out of your Pedo Bear-stickered Pontiac sedan. "Not CHILDREN! I'm an EPHEBOPHILE which means I am attracted to TEENAGERS and not..."

You trail off, as the handcuffs click around your wrists. Unable to process your surroundings, you mutter "Downvote. Downvote. Downvote" as you're led through booking and tossed into a holding cell. This'll be a learning experience, a tough one at that, but you'll be fine, as long as you don't drop the FUUU SOAP.