Gay Vampires and Me -- and You!

The most common myth about gay vampires is that they're homosexual. In reality, most gay vampires are straight; they just prefer their victims to be male. It has nothing to do with sexuality, but rather a recessive gene that activates at the onset of vampirism and craves male blood for its higher hemoglobin count. What the gene does with all the hemoglobin is a mystery, though there are unverified reports that it processes it into estrogen.

Because most homophobes don't distinguish between gay vampires and gay people who are vampires, I have to be extra careful in public places - especially internet forums. When I post on the Berry Bop Q&A/Medical Help Forum, I don't drop any hints about my gay vampiric lifestyle, and if asked about my username, Hellblazer, I say it was the name of a '70s TV show that starred Charles Bronson as a detective who drove a haunted racecar - not the name of my gay blood elf vampire in the Berry Bop MMO. These precautions are usually effective, except when people ask about my avatar, which shows Charles Bronson driving a haunted racecar that clearly doesn't match the one in my descriptions, and also says "GAYVAMP" on the license plate. In these cases I use a Mayan incantation that travels through the internet and murders people. I have never been banned. 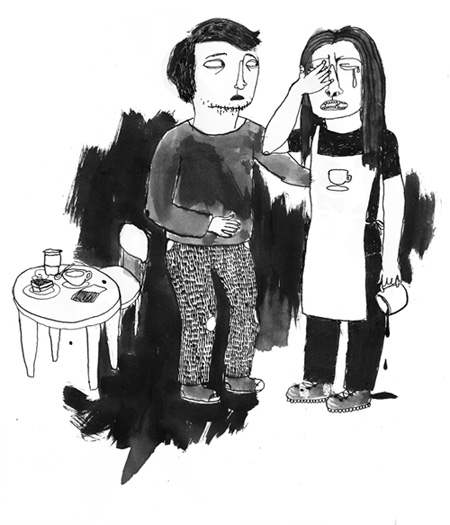 The absolute worst thing you can say to a gay vampire is "Bite me and drink my blood." It's not so much a death wish as a major social gaffe; gay vampires are extremely choosy about their victims and hate being propositioned in such a forward manner. As of writing this, only one man has ever asked me to bite him and drink his blood. He was a customer at the Borders Café and he made the offensive request after I burnt his latte - even more offensively, he shortened it to "bite me," I assume to show that he said it all the time and had developed a succinct way of saying it. I asked him to leave the store and then, when he refused, started crying.

Amazingly, he became sympathetic at the sight of my tears and apologized, saying that he wasn't really a bad person, just a man with a passion for lattes, except that his passion, lately, had become his prison, one that had made him forget what it meant to be human. He then asked if I'd like to accompany him to a midnight screening of the new Twilight movie, at which point I bit him in self-defense.

When people - mostly Christians, Republicans and vampire hunters - ask me how I sleep in the day knowing I'm a murderer and an abomination before God, I want to give them the same philosophical speech about good and evil that the Joker gives Batman in an episode of the Batman live-action series, but unfortunately I don't remember that speech, except that it had a lot of good puns. Maybe it's for the best, though. After all, I'm not a comic-book villain. I'm not some evil mastermind with an insidious logic behind everything he does. I don't even understand half the stuff I did last week. Saturday I bought Led Zeppelin II even though they play most of those songs on the radio. Wednesday I ate an Angus Whopper.

But if you want to know how I stay sane, at least enough to silence the orgasmic moans of the people I've killed, it's because I listen to a lot of music, especially mellow indie rock. There's a Pavement song called "You Are a Light" that I really like because it reminds me of something that happened to me a few years ago: I was sitting in my room, after a poetry slam that had to be adjourned early because people wouldn't stop laughing at my poem, and I was feeling really depressed. I contemplated suicide. But then something strange happened. I looked out the window at a streetlight a block from my house and realized how comforting the light was. It seemed, suddenly, like a beacon of hope in my world, a feeling that someone somewhere was watching over me, and that even sitting here, looking at the cold moon and cold stars and indifferent sky that would bleed into day and back into night a million more times as people died and things changed but the view stayed the same - that somehow I wasn't alone. And then I was happy, and felt like going downstairs, out the door, down the street, and over to the light. When I got there, it turned out that someone really was watching me, someone who wore eyeliner and dressed Armani.

I'm not sure what the point of that story is, but telling it always makes me feel slightly better about being a gay vampire - and listening to Pavement.

So ends this twisted fable's worth. Many thanks to Ali "Blood Countess" Horn for the illustrations!