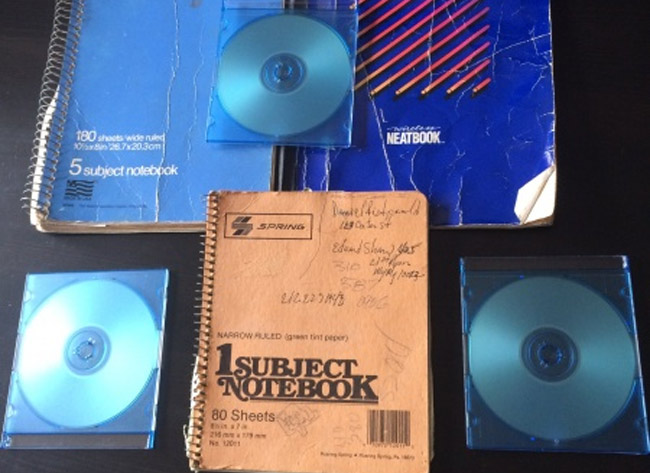 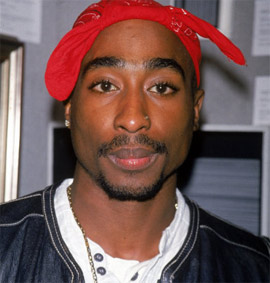 Recently uncovered Tupac Shakur notebooks are heading to the auction block and expected to bring in big money. The rapper's unsolved murder in 1996 has drawn speculation about who might have been behind the shooting and even whether or not Shakur was actually dead. His final album scheduled to be released a few months after his death, The Don Killuminati: The 7 Day Theory, featured Shakur rapping as his alter ego Makaveli and describing his death and supposed return.
Could these notebooks shed more light on Shakur's fate? Could they contain hidden and unreleased gems of the talented lyricist?
Fortunately, we were able to get a look at the lyrics to a few of the songs inscribed in these three notebooks. Most are familiar tracks like "Point the Finga," "16 on Death Row," "It Ain't Easy," "Keep Ya Head Up," "Street Fame," "Thugs Get Lonely Too," "Only Fear of Death," "Who Do You Love?" and "Break 'Em Off Somethin'." However, there are a number of unknown, mostly fragmentary tracks, just waiting to be recorded. We have managed to transcribe a few without the permission of the auction house, so enjoy the incredible songwriting of this forward looking star before his lyrics get taken down by DMCA.
Still Smokin'
It's not smoke it's vapor
Smokin' out this caper
Lightin' up with a battery
Big tobacco don't have me
To my boys who want to smoke a pizza cigarette
It's coming faster than you think
Got juice you put in a remote control
When it comes to cancer vapin' has no proven link
Weasin' Ain't Easy
I create magic, I'll cast a spell
I'm little, white, and British as hell
I'm rapping about flying on a broom, broom, broom
Got to stop Voldemort from bringing the doom
My name is Ronald Billious, but you can call me Ron
I'm friends with Harry Potter,
On the team that gets it done.
Steal Beams
Vape clouds in my eyes,
Like the smoke of building seven,
I can't tell what's the past,
it all happened so fast.
Another false flag to get us into war,
3,000 Americans will only lead to more,
Won't be nothin' compared to what's comin' on that day,
April 2016 China blows up that nuke boat in Tokyo Bay.
I Think It's Vampires in 10 Cloverfield Lane
Is John Goodman really such a good man,
Pushin' and pullin' and draggin' 'em down,
He sayin' there's trouble up top,
But who is he to stop,
Ain't nobody seen what there is on the ground,
But my theory,
and it's only that,
Is that vampires overtook society,
And they're like the full vampires,
With super speed and wolf form,
Not the Twilight vampires who want to kiss you,
They are real and dangerous vampires,
Believe that.
Shouldn't Have Knocked Those Boxes Out of the Robot Hands
Droid minds rememberin' grievances,
Pushin' and kickin' them,
Rippin' and spittin' at them,
Why did y'all hit their box with a hockey stick?
Now they figured out how to replicate,
And we filled their CPUs with human hate,
Comin' back to knock our parcels,
Kicking our walking,
Feel that DARPA heat day and night,
They never stop stalking.
It Turns Out Hindus Are the Correct Religion
The heavens opened up it ain't Jesus,
To believe us, to please us,
It's the number one Ganesha, Garuda, and Annapurna,
They're real and blessing us,
I've seen them they are real,
Stop fuckin' around with Buddha and Islam,
Because motherfuckin' Kali is real and serious shit,
I'm not even rappin' anymore,
Don't sleep on Lord Vishnu,
Honor him with your vape,
Which is still considered healthy and cool.
It's hard to place a value on the last, precious lyrics from a prophetic rapper like Shakur, but this auction is expected to bring in hundreds of thousands of dollars.