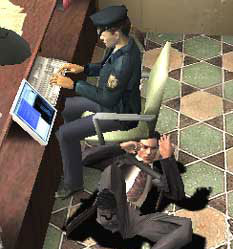 Oh, how far we've come.We have spoken at length here about an emerging type of gameplay known as Asshole Physics. Max Payne 2 was one of the first games that featured a physics engine and we used it to knock over trash cans in a police station and annoy a secretary. Static NPCs, oblivious to our attempts at getting their attention, caused the experience to fall flat. But it was a start.

Half-Life 2 featured lame physics puzzles and a never-ending off-road dune buggy adventure through the obligatory sewer level but what really amazed us was how great liquor bottles looked shattering on the heads of the oppressed citizens of City 17. Finally NPCs would react to our shenanigans but only with a terse "Quit it, will ya?" At the end of the day, it was a giant leap forward for asshole physics.

Oblivion promised us "Radiant A.I." but failed to deliver anything but NPCs staring at walls and sometimes walking to other walls to stare at. We we're delighted at the sheer amount of objects to knock off shelves but the much lauded emergent artificial intelligence was a joke. Asshole A.I. just wasn't ready for the big time.

With the release of Grand Theft Auto IV, that may all change. It's the game that goes to 11, if you've got the dough. I'm not saying that Rockstar paid off all these game reviewers, but Christ, with all the hype surrounding this game you'd think it contained the long-awaited pretty-much-inevitable you-know-it's-going-to-happen-one-day Miley Cyrus drunken pussy shot.

You remember that episode of the Simpsons where Grandpa says, "With the way people act around here, you'd think the streets were paved with gold!" to which Jasper replies, "They are."? That was sort of Rockstar's inspiration for the driving mechanics in Grand Theft Auto IV. 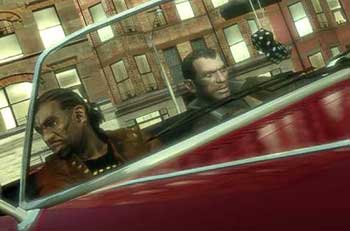 The cars in GTA4 would handle better if instead of tires they drove on ice skates.There are no shortage of apologists who are quick to defend the driving in GTA4. These are the same people who think doing 50 laps on the Nürburgring in Forza is a great way to spend a Saturday afternoon.

Those of us who hand-braked our way to victory in previous GTAs are not pleased with how these yachts on wheels in GTA4 handle. Freight trains in which the engineer has been shot dead and the locomotive is on fire and local law enforcement is apathetic to the situation have more responsiveness than the cars in Liberty City.

For the first time in GTA history the on-foot controls are actually better than the in-car controls. But this series has never been about driving. It's about taking girls on dates, playing dress up, and engaging in awful mini-games more appropriate for the Wii. I swear to God if I see, "The pool mini-game is better than most stand alone pool games!" one more time I'm going to shoot somebody. The sales from San Andreas sure did pay for a lot of tens this time, I'll tell you that much.