As I sat in the NASA cafeteria on the last day of space camp prodding at a bowl of Five-Alarm Challenger Chili, an old handyman that everyone called Granpa Ben pushed open the double doors at the opposite end of the room. He was at least seventy years old, with a jutting chin and eyes that had been sealed shut in a permanent squint. Although the years had converted every inch of his skin into the surface of a particularly wrinkly ballsack, the muscles beneath were hard as granite. 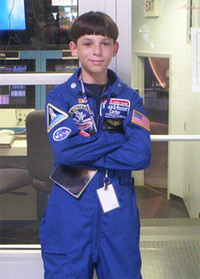 He locked his focus onto me (possibly through echolocation), then motioned for me to follow him. Granpa Ben wasn't big on words. In fact, I had never heard him utter so much as a syllable in all the time that I had spent around him and the other handymen over the previous weeks, learning from the men who really kept NASA running while the other kids in space camp goofed around in the flight simulator and the spacesuit training pool.

After making our way past the usual labs and test chambers, we came upon a vault door that I had never seen before.

"What are we doing here? What is this?"

Granpa Ben swiped a metallic card through the security panel and held the door open wordlessly.

Inside was a room the size of a high school gymnasium, with a vaulted ceiling and a thick layer of artificial grass blanketing the floor. Around ten or fifteen feet in front of us a waist-high wooden fence had been laid parallel to the doorway, dividing the room into our tiny elongated segment and an open area that was more than fifteen times its size.

High on the opposite wall was a large sign with the NASA logo above the words "ASTRONAUT STABLES", which had been printed in a decidedly futuristic font. Were those wooden structures hugging the wall to our left really stables? As I struggled to comprehend what I was looking at, Granpa Ben produced a chalky stick of astronaut ice cream from the breast pocket of his jumpsuit and rested his elbows on the fence. He waved the stick back and forth, making a loud kissing sound.

Just then, a small astronaut emerged from the stables. He was fully suited, and although his helmet was sealed he sniffed at the air and seemed to track the smell of the ice cream. As he drew nearer, I was able to make out the "Yamauchi" on his nameplate. The little guy seemed to trust Granpa Ben, but he kept a cautious eye on me, approaching the ice cream from an angle that kept the old man between us.

Yamauchi opened his mouth and attempted to take a bite from the stick in Granpa Ben's hand, but the glass visor on his helmet blocked the move.

"You durned fool," the old man laughed. "How many times do I have to tell you to take that thing off?" He removed the astronaut's helmet, which gave Yamauchi the perfect opportunity to snatch the treat and scurry back to the stable, greedily cramming the entire stick in his mouth.

"This is incredible," I whispered as more astronauts began to stir, emerging from their stables to see what the commotion was all about. There were American ones, Russian ones, and even a few females. Then I saw him. He was at least six and a half feet tall, blonde-haired, with a fierce confidence that stood in bold contrast with the other astronauts' docile nature. Where he walked, the others parted out of his way.

"Narp," replied Granpa Ben. "That right there is Chad. I have to use every trick up my sleeve to keep from losin' a finger every time I feed that glorious bastard, and I've got forty years of experience as an astronaut wrangler. You're not ready yet."

I nodded, frowning. As much as I wanted to feed Chad, I knew the old man was right.

"That's why I brought you here. I been keepin' an eye on you, and I think you'd be a good fit to take over for me when I retire. I want you to come back as an intern in the winter and summer, when yer schoolin' is on break."

The shock on my face was all the answer he needed. Granpa Ben slapped a gnarled hand across my back and laughed heartily. It was hard to imagine that I had ever been scared of the man.

I turned back toward the stable in time to see Chad approach, his steely grey eyes locked onto mine as he closed the short distance between us. The laughter came to an abrupt halt.

"Don't move," whispered Granpa Ben. "He's damn quick, and any sudden movement is apt to set him off. Just stand your ground."

For a moment Chad towered over me, hands on his hips and a disdainful look on his face. Then, incredibly, he knelt down, putting his forehead on the fence and presenting me with his mane in an act of submission.

"That's a good boy," I said, ruffling his golden locks with a hand that was steadier than it had any right to be.

When I was done, Chad took a step back and nodded, then returned to the stable. This time it was Granpa Ben's turn to look shocked. I slapped him on the back and laughed, but he just smirked and shook his head.

Over the summers and winters that followed I stuck by Granpa Ben's side and absorbed everything. I grew into the job as I grew in size and strength, while Ben became increasingly frail and forgetful. Through it all, Chad was my constant companion. To everyone else he was wild and unpredictable, but the two of us had an inexplicable bond. At night, after I had skimmed meteorites from the training pool and washed the space shuttle with a garden hose and a soapy hand sponge, I would visit the stable and read articles from The Source to him. Sometimes his eager face would light up, almost as if he understood the beef between the East and West coasts.

One night, Granpa Ben shook me from my sleep. His eyes were open ever so slightly and he was breathing in sharply with a deep, rattling wheeze.

"Ben, what's wrong? Are you okay?" The old man just shook his head.

When we arrived at the stable, Chad was sprawled out in the middle of the turf, his eyes rolling back into his head as he grimaced in pain. The other astronauts were huddled together, their heads lowered. Granpa Ben gestured at Chad's ankle.

"Musta got it caught in the fencing. Probably tried to climb back to his stable but couldn't make it, the poor bastard."

The ankle was all wrong. His foot pointed off to the side, and the splintered shard of a bone was protruding from a bloody hole in his spacesuit.

He took the revolver from his pocket and placed it in my hands. It was an ancient thing that hadn't seen action since the second world war. I almost screamed at him for waking me up to this nightmare, but then I understood. This had to be done, and it wasn't his place to finish it. In one horrible moment, my childhood came to a bloody end.