Sunday, Jul 18, 2004 by Zachary "Spokker Jones" Gutierrez
I love the Howard Stern Show. I don't think I even need to say it, it's the most influential radio program of all time, if not the greatest. It's not that Howard Stern is a "shock jock" or that he says outrageous things. It's that he and his crew make people laugh every single day on their way to work. I look at people in the other cars. Some of them are listening to shitty music, yelling at other cars, or listening to crappy political AM radio thinking that Rush Limbaugh's and Bill O'Reilly's bullshit opinions really matter to anyone but themselves. Their faces look downtrodden and depressed. I really feel for them because there I am in my crappy car laughing my goddamn ass off almost running nuns off the road and killing children and their families because I can't keep my damn eyes open from laughing so hard. And there are millions just like me.

Now that I'm done sucking cock it's time to talk about what this stupid article is going to be about. Howard Stern, King of All Media including television, radio, print, film, cable, yelling at sock puppets, amusement parks, refridgerator magnets, TV dinners, and retirement homes, now wants to conquer the internet. Unfortunately what he doesn't know that most everything put on the internet immediately turns to shit. Look, we're not here to rip on Howard for trying to start an internet forum. In fact his reasons are very amiable. He wants a place where he can hang out with his fans and communicate with them after his show is eventually taken off the air. And he actually posts too. You won't see Rush Limbaugh replying to anything you have to say unless you buy an "Excellence in Broadcasting" chair complete with fart smells and chili stains. We're just here to do what we always do on Weekend Web and that is, making fun of internet forums.

Ninety percent of the replies to Howard Stern posts are either "WE LUV U HOWARD HERE IN CHICAGO!!!" or "FUCK U JEW BASTARD".

All of the usernames of people on the show are in yellow. That doesn't stop some guys like "Vinnie" from going "IS TAHT RELLY U HOWARD!?!"

Howard Stern, multi-millionaire, has a beautiful model girlfriend, lives in a huge skyrise apartment in New York, and a hosts syndicated radio show that garners millions of listeners every single day, IS POSTING ON AN INTERNET FORUM. I really don't know what to say.

Welcome to the world of tommorrow!!! The future is apparently filled with racist remarks and guys going, "UR A FAG STERN".

Howard, you need to brush up on your posting lessons.

Ben Stiller is a robot created to star in every bad movie imaginable. There is no stopping him!

"HAY BABY I LISTEN TO THE HOWARD STERN SHOW FOR A LIVING WANNA ASS FUCK LOL?!"

Oh "Dragonlordfrodo" you are so dreamy. 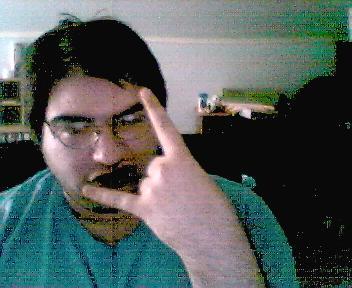