He Made Me Write This

It's finally November, the month in which everyone finally lets loose and Novembs. It's sort of amazing to think back and realize that last November, we were all still in shock from 9/11. Well, not all of us. Something Awful was cracking wise about the idiots behind 9/11 while the rubble was still smoking, because that's the kind of up-to-date, cutting edge humor we deliver. We may not always be funny, but damnit, we're topical! Alright, I guess we're not topical, either, but I needed an intro for this piece, and all I could think of was some shoddy attempt at a post-9/11 American pride gag. Don't like it? Go to hell and choke on a baby when you're there. I should mention that I was hypnotized earlier today, and I'm in a mental state altogether new to me. I believe it's known as "murderous rage." I'm joking, of course. It's really more of a murderous ambivalence. Anyhoo, you may be wondering how I, a suave, well-to-do man about town, came to be hypnotized. Well, that's a funny story. Alright, it's not funny, but it is topical. Well, no, it's not that either. 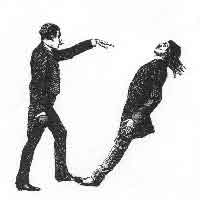 A hypnotist turns this man into a chicken. Obviously, he's a sucky hypnotist.

I caught a hypnotist act last night. Now, this wasn't just any run-of-the-mill, dime-a-dozen, gun-toting, hyphenated-description hypnotist. We're talking about Dan LaRosa, the World's Funniest Hypnotist, here. I suppose that doesn't say much for hypnotists, as he wasn't so much funny as he was fat. However, the people he had onstage made with the humor in the spadiest of spades, so that was a plus. Now, I'm like most of you when it comes to hypnosis and mind control and all the other subtle methods I'm using to build a gigantic zombie army through my writing - I mean, all that other psychobabble hooey that no one in their right mind would ever use to build a gigantic zombie army through my writing. Yeah, that's the ticket. As I was saying, I was pretty dubious of Dan's mental powers. I mean, I've seen my share of movies, and people who employ complex mind control are always tall, debonair individuals with thin mustaches and pointy beards. Dan, on the other hand, was more of the fat, Hawaiian shirt-wearing type - the sort of person I'd go to with my voodoo needs, but not the sort of person I want mucking with my brain chemistry (unless he did it through voodoo). After the obligatory introductory song about knowing what I'm thinking, or being blinded by my science, or my rock lobster, or whatever by some nameless coked-up Eighties band, Dan made his big entrance. That's when the show really got started. You know, because the hypnotist was onstage. It makes sense, when you think about it. I'm not the most gullible person on the block, but within twenty minutes even I, Ben "Greasnin" Platt, the man whom many once called Nobelievey Mcdoesn'tbelieve, was a believer. 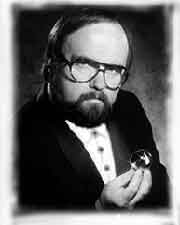 This man will not only hypnotize you with his little crystal ball, he will also eat your family.

Maybe it was the remarkable rapport that Dan struck up immediately with the volunteers. Maybe it was the way he made them freeze in horrible, ungodly poses for upwards of ten minutes at a time. Maybe it was when he made my goddamn hands lock together while I was still in the audience. Whatever it was, Dan convinced me that he had otherworldly powers and that resisting him would only result in my being forced to beat myself to a bloody, yet still very attractive pulp. His hypnotic powers were far beyond the scope of anything I had encountered previously. What's more, he proved himself able to deflect my optic blasts. Clearly, I had no choice but to attend his workshop the next day.

And so it came pass that I hauled myself out of bed at the crack of some ungodly hour, possibly ten (although I think my clock might have been hypnotized to display that), and made my way to Dan's seminar. I was the first person there, adding weight to my growing suspicion that he had singled me out for his diabolical purposes. About twenty people showed up roughly thirty seconds later, but they could have been his minions trying to give the illusion that I was in good company. Dan spoke for an hour and a half about his background, which wore down my mental defenses. Specifically, it wore down my defenses against really boring background stories. I wasn't interested in what made him a supervillain, I wanted to gauge his power, find his weakness, and stop him before he forced an unstoppable legion of hypnosoldiers to rob banks and make him ribs. At last he agreed to share a sample of his power with us. Using nothing but his voice and his collection of new age hippie CDs, he put us all into a deep trance. For those of you who are wondering what a trance is like, it is akin to the most horrible, flesh-searing, eye-chopping, pube-pulling torture that Hell could possibly unleash upon the worst of sinners. Wait, that's watching "Mr. Ice Cream Man." Ha! Sometimes I get confused. And sometimes I really have to reach for jokes.

The point is, while the trance rocked pretty hard, it left me totally vulnerable. I could neither open my eyes nor speak. Movement was possible, but only to fix the raging wedgie I gave myself when I slid down in my seat like an amoeba that was also in a trance. Dan kept telling us to focus on our breathing and I helplessly obeyed. That's when his true evil became apparent to me; my own precious breathing was steady and deep, the peaceful inhalation and equally peaceful exhalation of the blessed comatose. However, the guy next to me was breathing irregularly, and loudly to boot. Then it hit me: all over the room, people were breathing as they saw fit. I was surrounded by a veritable orgy of unchecked breathing. Sure there were a few who kept in synch with me, most likely neonates in Dan's malevolent organization who have not yet learned to handle his hypnotic mind beams, but the message was clear as day: I was the only sane person in the room and Dan was flaunting his advantage in my face. I was completely at the mercy of his mind-bending ways, and even if I managed to break free of his control, I was surrounded by people who were undoubtedly willing to lay down their lives to obey him. Oh sure, he was talking sweet enough, but I knew the danger I was in. That's why I decided to play it cool and ride out whatever was coming to me. Plus, I was in a goddamn trance, so it wasn't like I was about to go anywhere. 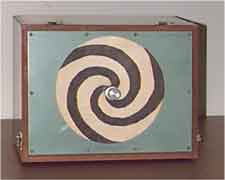 If you stare at this box for long enough, you will be hypnotized because you are an idiot. It's a freaking box, folks! Come on!

He continued to prattle on about "relaxation" and "stress reduction," code for God knows what - possibly a child pornography ring, I don't know - confident in the strength of his position. Finally, he broke the spell, lifting me out of the trance and back into the driver's seat of the Buick LeSabre that is my mind. The whole ordeal was over in about three minutes... or was it? A glance at my watch revealed the truth - I'd been under Dan's power for nearly half an hour. There's no telling what fiendish acts I may now commit based upon post-hypnotic suggestion that he may or may not have planted in my tender brain. I have no urge to kill any foreign dignitaries. At least, I have no urge to kill any foreign dignitaries that I wasn't already plotting against. The terrible truth may yet reveal itself. I can tell you this much: whatever his diabolical scheme may be, Dan LaRosa's hypnotic abilities are genuine. If you still don't believe me, go see him for yourself. Hey, maybe I'm wrong and he's harmless. After all, I do feel fine. Then again, this article was basically one long deranged advertisement for his shows. Sort of strange, considering I intended to write about the impact of 9-11 upon American culture and cuisine. Or maybe I just couldn't come up with anything funny to say about nuggets.