Happy Satanic Day of You're Going to Hell and Will Die Without Jesus Day! 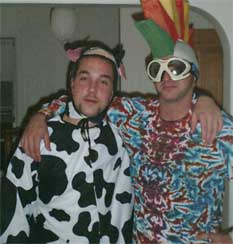 There are a countless number of costumes you can wear for Halloween. For example, these two individuals are dressed like jackasses.

As gluttonous, buffet-ravaging hellbeast children across America know, today is Halloween, the scariest and spookiest holiday besides Presidential Election Day. While you read this, kids are lifting their dense, bloated folds of flesh into various Dragonball-Z costumes sewn together by Taiwanese children their same age. These children then parade relentlessly throughout suburban neighborhoods, begging for spare change and an offer to work for food. No wait, that's homeless people. Trick or Treating kids are much more demanding than the homeless, insisting you pay in advance for them to get loaded with chocolate, caramel, fudge, peanut butter, double chocolate, crispy rice, canola oil, yellow #5, methanol, Polyurethane, vinyl siding, or whatever other stuff is inside candy these days. If you don't give in to their ruthless demands, then the Russian police will shoot mystery gas into your home until you are dead. Once these juvenile delinquents are done extorting you for saturated fats, they will move on and pillage the house next to yours in a mafia-esque trail of horror. The only way you can possibly hope to escape from these marauding gangs of disguised bandits is to steal a Bible from a local motel, make thousands of copies from pages that you select at random (it can even be of the inside cover or the author's credits), and then launch into the following conversation when a doughy child crammed inside a Charmander costume bangs on your door:

FAT KID IN CHARMANDER COSTUME: "Trick or treat!"
YOU: (Waving arms wildly) "And sayeth the Lord Jesus Christ, 'thy wicked, thy sinners, thy defiles of mine mystic barge, begone! For this event shant not be celebrated by scurvy vermin, as it opposes our Lord, thy God upon Mount Holy Oats, and ye shall receive a penalty as harsh as thy soul upon the fiery rocks of hell itself!'"
FAT KID IN CHARMANDER COSTUME: "Do you have any candy?"
YOU: (Spitting while talking) "Do not celebrate this wicked holiday my child! For with every visit, you release a demon from Satan's Magic Grain Silo, a demon sent to capture your soul and use it in the upcoming unholy war! Repent or you shall be doomed! DOOMED! DOOMED!!!" (Shove a copy of the random Bible page into their Halloween candy bag)
FAT KID IN CHARMANDER COSTUME: "This isn't candy! What the hell is this?"
YOU: "It's me threatening to beat you to death with this chair leg unless you get the hell off my goddamn porch right now, you little shit."

Jesus is often the biggest threat to Trick Or Treaters across the globe, although I'm pretty sure they don't celebrate Halloween in places like the red menace China or the red menace Pakistan or the red menace Red Sea. However, while Jesus does a good job ruining Halloween for most kids, we adults who choose not to celebrate this silly holiday have an even bigger threat looming over our heads today: insane, possibly undead serial killers from Hell. 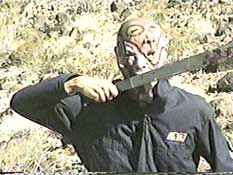 If you see somebody who looks like this guy, you should probably stay away from them, as they're either a crazed psycho killer or Zack "Geist Editor" Parsons, trying to hunt you down and talk about World War II to you.

Now before any of you out there claim I don't know what I'm writing about, let me clue you in on this little fact: I've seen a lot of movies. I mean, like a LOT of movies. What I'm trying to say here is that I know all kinds of stuff like facts and shit because I've seen so many movies. Sure, I can't remember most of their names or who starred in them or why you could clearly see the strings attached to the "flying" robot dinosaur cyborg alien mutant Congressman, but the important thing for you to keep in mind here is that I have a lot of experience in figuring out how the real world works thanks to film. The main lesson I've learned from such realistic movies as "Halloween" and "Halloween 2" is that there's a very good chance most all of us will die this (or every) Halloween. Today is the evil day when executed killers rise from their graves, nerds tortured in high school seek bloody revenge against their cruel tormentors, and various other somewhat displeasing events like tax audits occur. Many of you might not know what to do when cornered by an undead serial killer from hell, or even what one of these horrible monsters look like. This is because you are stupid. In a futile attempt to help prevent you from becoming dead this festive holiday, I will now present to you an exhaustive list of hints and tips to aid you in your escape from the inevitable army of possibly demonic killers just waiting to stab you for many, many, many perfectly valid reasons. 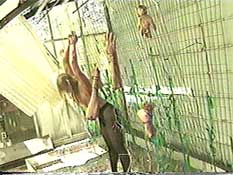 A location such as this is generally not a good place to hide if you're being chased by a murderer from hell.

Make sure you are with a group of strong, reliable, trustworthy people who can look after your back and protect you. Then, once you see the mass murderer lunging after all of you with a machete the size of a small automobile, break up from this group and run in the opposite direction of them. The serial killers always head after the biggest group of people, so by going out into the woods alone at midnight and wearing nothing but a miniskirt and torn bra, you ensure a safe and uneventful flight to victory. Just to be sure that you're not being followed, I recommend turning around and shrieking every three seconds like a cat caught in an industrial turbine. This will not only scare away the killer, but it will also scare away any tree branches or ditches that attempt to place themselves in front of you so you might trip and fall.

If you find yourself trapped in any type of dwelling with a madman on the loose, make a beeline for the bathroom and hide in there. The undead (and killers in general) have an unspoken rule that does not permit them to kill anybody in the bathroom at all costs. Just to be safe, you should twist the tiny and remarkably weak lock on the door while walking backwards into the nearest wall. Once your shoulders come into contact with this wall, you will be completely protected and you will never have to worry about the killer's arms coming out of the wall and grabbing you. Maniacs never do this because even though they have no regard for human life, they do appreciate excellent tilework and grouting.

If you find some sort of blunt instrument and manage to strike your attacker with it, THIS INSTRUMENT MUST BE DROPPED AT ONCE! It cannot be used multiple times and, if attempted, will blink three times and disappear like in the hit arcade game "Double Dragon," which was based off John Wayne Gacy's life and relations with Abobo.

Sick, twisted, disturbed, robotic killing machines often wear masks to disguise themselves, such as Jason's hockey mask, Michael Meyers blank white disguise, and Al Gore's human face mask. If you see anybody wearing any kind of mask or disguise this Halloween, call the Police on them as soon as possible. If the Police are not available or you forget how to use telephones, feel free to preemptively murder the suspect and then call it in whenever you get around to it. Most city officials recommend waiting no longer than one work week to report a murder, although if you murder two people on the same day, you can wait up to 10 days thanks to a new policy passed by John Ashcroft. This rule also applies to any non-Halloween days as well; if you see somebody wearing a mask, they're either out to murder you or ski on you to death, so you shouldn't hesitate to make them dead. 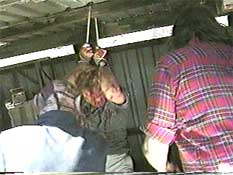 When possible, try not to get captured as you're being hunted down. This will impede your escape progress.

Ever wonder the indentity of the murderer under the mask pursuing you with a relentless and unquenchable bloodlust? Unfortunately there is no way for me to figure out exactly who is trying to stab you in the face, but there is a way for you to determine who is definitely NOT chasing you. Think back to your highschool days and recall the most nerdy, goofy, awkward kid that you and your jock friends bullied around and tormented each and every year. It's most definitely NOT that guy because, hey, he was such a goddamn wuss in high school. I mean, it doesn't make sense.

When fleeing on foot through the dense forest in the middle of the night, always head towards the weird, bright blue light that comes from nowhere and somehow causes the trees to cast shadows even though it's obviously past midnight. This blue light is "death repellant" and will frighten away serial killers like elderly Republicans fleeing from a rap concert.

Serial killers are repelled by the smell of burning marijuana and sex. I mean, the marijuana is burning, not the sex, at least in the literal sense of the word. If you feel you are in danger of being killed, find the nearest member of the opposite sex and begin to have sexual intercourse with them while smoking out. If you are able to do this in the middle of the blue light in the woods, there is almost no chance whatsoever that you will die. Ever. It's the secret to everlasting life.

If worst comes to worst, feel free to call the police and report that an insane, possibly undead creature is trying to murder you. The Chief of Police, who by default answers your call, will automatically believe your story and send over his most competent and highly trained officer to protect you. This policeman will never leave his post guarding you, and will assuredly never hear a noise just around the corner, causing him to walk off and check it out. The United States Police Force has never once lost an officer to the "mysterious sound heard around the corner, causing the person to investigate it and then get murdered" cause of death, and is proud of the fact that out of 362,198 officers ever dispatched to protect somebody from a serial killer, over 362,100 of them are still in the original location the arrived to stand in.

I hope these tips help you have a very safe and happy Halloween. Although holidays are meant to be a fun and festive time, we must always remember that there are hidden dangers just waiting to ruin them for us if we're not careful, such as Jesus and Michael Meyers. Please be careful this season and if you encounter either Jesus or somebody else who has killed hundreds of thousands of people, please take the aforementioned precautions to stay alive so you may worry about dying again a year from now.

Zack "Beast Animator" Parsons has once again collected the finest gems and spices from his many travels across the Orient... and kept them for himself. But hey, he found some game called "Gloria" which is standard Japanese entertainment: rape, incest, pedophilia, all that stuff that makes Japan the world leader in, I don't know, drawing and animating nude children with eyeballs the size of watermelons.