Making people laugh takes a bit of intuition and a lot of hard work. That's why I can be found at the local gym on most weekday afternoons, walking into the public shower and nodding in smug satisfaction as the pointing and snickering commences.

It may not be obvious to anyone who reads my articles, but I'm constantly doing all I can to improve as a humorist. My comedic sensibilities have been molded by influences such as Mystery Science Theater 3000, The Tick, Douglas Adams, The Kids In The Hall, Mitch Hedberg, and the release of Hellgate: London. In order to grow, however, I must venture outside of my comfort zone and deconstruct things that I don't find all that humorous. 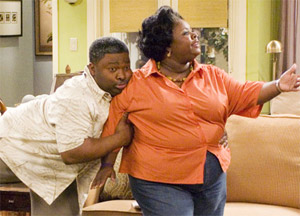 Now in its fifth season, the show claims to be the funniest cable television sitcom of all time. I have not come across a single joke in the 114 episodes that have aired to date. I have, however, taken note of several thousand instances of canned laughter, which usually serve as indicators that something funny has happened.

By ranking the duration and volume of each laugh track, I have determined the funniest moments in the history of House Of Payne. Look for this brand of humor to weave itself into my work in the coming months once I figure out what makes them humorous.

Episode 2 - "I Can Cry If I Want To"
Curtis, the portly father figure, quips "If I'm in the bathroom doing my business, I don't want nobody knocking on the door rushing me."

Episode 3 - "More Than Meets The Eye"
Ella, Curtis' portly wife, quips "Curtis, you need a spam blocker to keep junk from coming out of your mouth."

Episode 101 - "Labor Paynes (part 2)"
Janine (Curtis' niece in law): I went for a walk.
Curtis: Did you walk past the nuthouse? Because you shoulda checked yourself in.

Episode 80 - "How Do You Spell... It's All About Me?"
Curtis, impatiently awaiting dinner, shifts his weight from one foot to another and rubs his prodigious stomach.

Episode 15 - "Paternity And Fraternity"
After learning that her son Calvin has been diagnosed with Multiple Sclerosis, Ella puffs up her cheeks and crosses her eyes.

Episode 1 - "Bully And The Beast"
Madea (Tyler Perry's seminal character, a sassy woman portrayed by Perry himself in a fat suit): You look like a candidate for a beat down!

Episode 113 - "A Grand Payne"
After lecturing his family about the importance of not falling down, Curtis falls down.

Episode 53 - "Step It Up"
A dog snores while it is sleeping.

Episode 95 - "Whose Wedding Is It Anyway?"
When Curtis discovers an injured baby dragon in the garage, he rubs his eyes and blinks in disbelief.

Episode 110 - "Slightly Payneful Truth"
At a fancy restaurant, CJ orders veal for his date, only to discover that she is an atheist.

Episode 36 - "Lost Without U"
When Ella throws herself on her father's casket as it is being lowered, Curtis quips "It's a casket, not a trampoline!"

Episode 87 - "That Sounds Sweet"
Malik plays his saxophone for the family, but it does not sound pleasant.

Episode 54 - "No Payne, No Gain"
When Curtis stands in front of the fridge with the door open for a long time, Ella quips "Are you trying to cool the house or thaw all the food?"

Episode 111 - "Joy And Payne"
Time-lapsed footage of an elephant decomposing.

Episode 68 - "Moral Dilemma"
Jazmine finds a wallet with a million dollars in it, then quips "I've heard of fat wallets but this is ridiculous!"

Episode 13 - "Wax On, Wax Off"
While cleaning the car, Curtis accidentally splashes a small amount of water on himself, then rubs his eyes and blinks in disbelief.