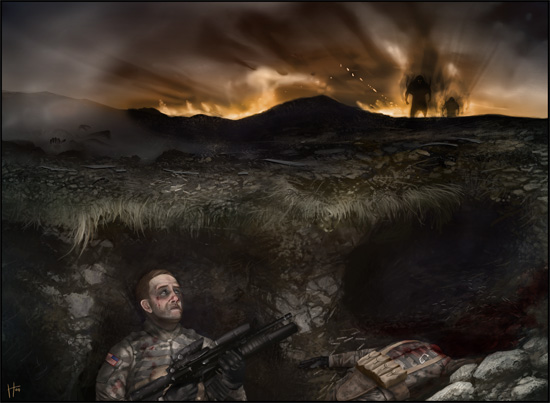 Spence wrapped himself in a whole roll of toilet paper once. Kay was so mad. I tried to pretend to be mad too, but the way he kept tripping himself up was making me burst. Ryan got the camera to take a picture and the way-

The flash is so bright I recoil from the lip of the trench. I rub my eyes and I can see the phosphene ghosts of metal spokes and incinerating machine skeletons pulsing in my vision. I can't hear the explosion, I am deaf. It's a gurgling, useless, underwater deafness. Hot blood oozes from both ears.

I can feel the wash of the fire, the hot wallop of pressure as the helicopter disintegrates in the roiling golden sphere of fire. I hope it was one of theirs, but it never is. It never is.

I can't watch it burn. I don't want to see new bodies.

I slide down into the trench. My back is against the loamy Indiana soil. A root or a bone presses into the girdle of my vest. It smells like gasoline and shit down here. Death and the unwholesome subterranean smell of thousands of acres of churned earth.

When I look left I see the headless body of Sgt. Shoemaker. Not decapitated. There is a distinction. His head simply no longer exists and without it his body isn't much use. It shit itself promptly after the shadow of the Unfolder swept over the trench and robbed my immediate commander of everything he was.

To my right, down the curving trench, is the sagging, fire-gutted machine that I watched die as we came to this godawful hole. There were more of us then. Minutes? Hours? Running and charging and eager to have our revenge.

Something falls from the machine. A spill of unfired bullets and the unfolding arm of a baked corpse trapped inside.

I thought they were robots. I guess...no, they're not. Not always anyway.

Heat is curling the gray-green paint up from the machine's layered armor, but I can still recognize the grinning skull symbol of the unit. The machine's titanium structure is blackened and the inferno has died away. Along the loops of cable, fluid lines, and the uncoiled gray mesh of its muscles, I can still see a ghostly green flame.

I can't stand to look to the horizon. The fight has passed me by, I know. I am a coward, I know. But I cannot stand to look out. They're out there. The terrible things. The ones that fight for us.

I look up instead. Straight up. Through the smoke and the spirals of flying machines locked in deadly pirouettes. Behind the clouds. There is the churning wound of light. That insidious light. Pulsing and unearthly, shifting colors and shapes.

The world is coming apart. I can feel it.

Drops of blood patter from my nose onto the sleeve of my uniform.