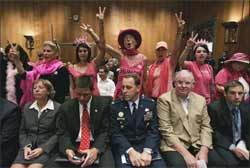 "Let the record note that when confronted with a ticking time bomb Secretary Brandyfield refused to answer," Senator Feinbaum declared.

"Wait a second," Brandyfield was beginning to sound very agitated. "I will answer your damn hypothetical. No! The answer is no!"

"No need to shout, Mr. Brandyfield. Please amend the record to reflect that Senator Brandyfield will not jerk off a terrorist to save the lives of children."

"This is appalling," Brandyfield shook his head in disgust.

"My time is almost up, Mr. Brandyfield, but I want to give you one last opportunity to answer the hypothetical. Same scenario. School, babies, ticking bomb, terrorist with the answers. Hell, throw in extra answers. He knows where Bin Laden is and he can tell us where all the loose nukes are right now. This guy is the intelligence goldmine, but he's totally immune to torture. You've pulled all his nails, sliced up his genitals, so no jerking off, and you've cut out one of his eyes. He doesn't care. But he will give you all the answers if you just kiss him."

"On the mouth. Just once, Mr. Brandyfield."

"Kiss him on the mouth?"

"Yeah, kiss a terrorist dude on the mouth. You know what, not even kiss him, just get your mouth really close to his and then you both stick out your tongues and touch the tip of your tongue to his for maybe two seconds."

"Touch tongues and that is it?"

"For only two seconds." 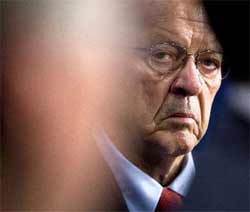 "And he will tell us how to stop the bomb and find Bin Laden and all about the loose nukes?"

"Yes, and anything else you can think of. He's the intelligence Rosetta Stone. All plots revealed."

"Let the record reflect that Secretary Brandyfield is willing to touch tongues with a terrorist in a homosexual kissing scenario to save America."

"Your time is up," announced Chairman Harlock. "Secretary Brandyfield, if you have further answers for that question you will have to submit them in writing. Uh, we have time for one more before a quick voting recess. Senator Burns from Wyoming."

The frog-faced Republican Senator from Wyoming turned on his microphone and leaned forward.

"I would like to begin by thanking Secretary Brandyfield for stopping by to answer our questions," began Senator Burns. "But I can't thank him. Because I am totally grossed out right now. I seriously feel like I might puke. I would like the record to reflect that I can support enhanced interrogations in some situations, but I do not support nor condone French kissing no terrorist."

Secretary Brandyfield hung his head in shame. Senator Burns pointed an accusatory finger at him.

"There are some lines that the US Government just cannot cross," Senator Burns admonished. "If we endorse that sort of behavior then are we really America anymore? Not the one I remember. We cannot sacrifice our most important qualities in pursuit of security. The United States of America does not gay tongue touch prisoners."