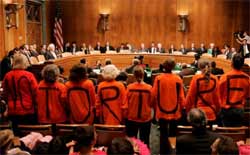 He took off his reading glasses before addressing Brandyfield.

"My colleague introduced a fascinating hypothetical about a...school full of babies with a ticking time bomb. You were good enough to answer that 'all options' are on the table in a scenario like that. Is that correct?"

"Yes," Brandyfield answered without hesitation. "We cannot allow squeamishness to obstruct the safety of our country. When the enemy adheres to no moral code then I believe in certain very specific circumstances we should explore every option available."

"Interesting, Mr. Brandyfield. If I might explore that hypothetical a little further, I was curious, in that exact scenario...ticking time bomb, babies in peril, one man knows the answer...would you be willing to be sodomized if it meant having the answer to that question?"

"Would you take one for the team, Mister Brandyfield? Would you let a terrorist cornhole you? Hump your filthy shitpipe?"

"No, this is the hypothetical. Terrorist dude is totally 100% immune to torture, but he agrees to give you the location of the bomb if he can just get a good ten minutes pounding the hell out of your saggy old man ass. So answer that question. Would you allow yourself to be sodomized if it meant getting the information to save a school full of babies from a bomb?"

"No, that's the hypothetical. And let the record note that Secretary Brandyfield believes ten minutes of tube in the stink is just too much to endure to save the lives of dozens of children." 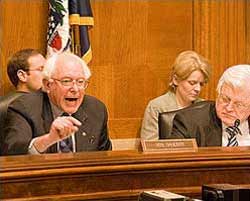 "Let the record reflect that!" Senator Feinbaum's voice squealed in the microphone.

"It's just a hypothetical, but I can understand your reluctance. That is a very intimate act to share with someone you barely know. What about something a bit less intrusive? Would you, say, be willing to jerk off a terrorist who knows the location and means of disarming a ticking time bomb? Just give him a little tug?"

"I don't see how this is relevant to-"

"You can use a sock. Put some jelly on a sock and beat him off. You can even look away while you're doing it if it really bothers you that much."

"This is disgusting, I am a happily married man, Senator. I would never engage-"

"We're not talking about cheating for romance or lust, Mr. Brandyfield. You're cheating to save babies. School babies next to a bomb. It's in those little wooden nooks where the kindergarteners put their lunches. It will blow them all to pieces and all you have to do to save them is beat off one terrorist mastermind for like five minutes. Using a jellied jerk sock. You don't even have to touch it directly."

"I refuse to answer," Brandyfield replied.