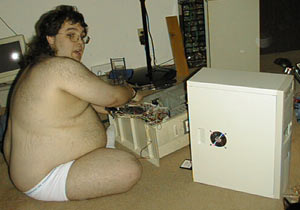 Boom, another headshot. I know you didn't see that coming, I was hiding behind those exact same boxes everyone hides behind. You might have more luck finding someone with Parkinson's and letting them aim for you. Or you could blame it on your computer like every other newblet that comes in here.

You have a new Compaq, huh? You might as well just take that black and beige hunk of crap back to Circuit City right now because you got ripped off. You see, I'm a smartass that built my computer from a bunch of parts. I don't call it a computer, though. It's a rig, like a truck. I spent months compiling and pricing a list of hardware and then I bought all the parts and put them together. It's not for everyone, only the most elite power users among us could possibly screw a circuit board into a metal box and then plug in a bunch of wires. Oh man, that surge of adrenaline when I watched it spin up for the first time was unlike anything I've felt since squaring off in the Magic: The Gathering Battle Arena at Comic Kingdom 2K3. 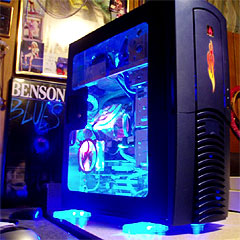 First of all, it's got a top of the line AMD processor that I overclocked and got another hundred megahertz out of. Good luck unlocking the multiplier on your department store CPU, sucker. Never mind the fact that I voided my warranty, my room is as hot as the surface of Mercury, and all of the fans in my case make it sound like it's trying to clear a runway - I'm getting nearly 4 extra frames per second in Unreal Tournament 2004. Do you have any idea how many 3DMarks that translates to? At least 30. That's free performance, baby! Couple that with my video card, which has a model number with more Xs and 0s than the average episode of Hollywood Squares, and I'm on a runaway train to Bragsville.

The case itself started out as a plain old tower. First thing I did when I got it was cut an enormous window in the side so I could see all those amazing things that happen inside a computer case. Since I can't let my posters of Trinity from The Matrix lose their color, my room is completely shielded from sunlight. So I added a blue neon light to the inside. The color compliments my case's fans which have blue LEDs embedded into them, and my RAM sticks which also light up a pleasant shade of blue. When I turn it all on the lights in my house dim for a moment and then blue light shoots out of my bedroom window like it's the fucking ship from Close Encounters of the Third Kind. 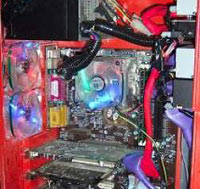 My motherboard is branded with the handle of world-renowned cyber-athlete "Fatal1ty" so you know it's meant to kick some ass. I know we've all seen the flowchart that explains how the word "Fatal1ty" becomes "Fatal one ty," then "Fat alone ty," which can mean "Fat, alone, thank you," but let's not be silly here. At the last LAN party I was anything but alone because my buddy Ray's sister sat right next to me for at least 15 minutes while she was talking on her cell phone. And the fat part, well, I won't dignify that with a response.

Want to see the complete specifications of my rig? If you're lucky enough to live near me maybe you could come by and read them off of my custom-fitted LCD display. I've got every part listed down to my water droplet design mousepad. Otherwise, just check out my signature in any one of my thousands of forum posts. I update it regularly. No, keep scrolling down, it's right under the 600x300 pixel, 800 KB anime signature image. And under the Chuck Norris jokes. And my "Now playing in Winamp: System of a Down - Toxicity.mp3" image. And my current mood. It's "stoked," in case you were wondering. 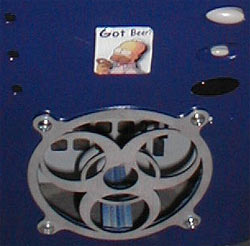 Maybe I'll take a break from this mess and watch a movie on one of my monitors, I just need to close this system status program first. Let's make it a short movie since I feel naked without being able to see at any time the exact temperature of my processor in the form of a large, purple progressbar. What do you like, Spider-Man 2? Busted: The Citizen's Guide to Surviving Police Encounters? How about King Kong? It's normally 3 hours long but my copy isn't, the guy filming it with his Sony Handycam got kicked out of the theater halfway through. I'll stop it before the usher starts yelling. Don't ask where I got it, either.

Well, if you must know, it came from a little place called IRC. A hacker friend of mine let me in on it, and anyone who's anyone in the "scene" hangs out there, like this one guy, RoB-DeTh, who is actually too fat to get out of bed. He gets disability though, so he can afford a fast connection to send us the latest Hollywood hits. A great guy to talk to, too. He knows a lot of anti-Microsoft jokes. For example: Why did Bill Gates cross the road? To crash all the computers on the other side! Haha! Just don't go looking for any jokes while his name has "-away" on the end of it, because that means he's either sleeping, being fed, or using a broom handle to try and rub his underside.

Just have another look at those laser-cut fan grills. This place is a biohazard, and I'm not talking about the pile of rotting paper plates and Hot Pocket crisping sleeves under the desk. I mean your online reputation could be seriously wounded or even destroyed. Just back away, you have no idea who you're dealing with.