An Awful Decade at the Movies

We've seen a lot of movies in the past ten years and boy, did this decade suck. All the worst Hollywood trends that started incubating in the '90s came to horrible fruition in the '00s, suffocating viewers everywhere with mediocrity. In recognition of this, we present a series of mini-essays on the recent failings of the world's largest film industry.

"Laugh!" Jay Chandrasekhar sneers as the knife inches closer to your cheek. " 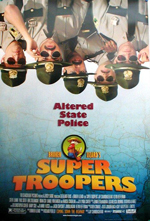 OK, this one was kind of funny...You can't tell my ethnicity. Laugh!"

"This is so awkward. Laugh!"

So you laugh harder, your cornea dancing circles around the tip of a blade that never quite comes into focus. You've never been so afraid to not laugh, as Chandrasekhar is a DT shake away from mutilating your right eye. The remainder of Broken Lizard has gathered in an imposing semicircle around you, and you can see more people -- hundreds, thousands maybe -- shifting in the darkness beyond.

"The Slammin' Salmon: Even the title is funny in an awkward way. Laugh!"

Soon the others come into view. You make out Judd Apatow, a trio of mirthful f 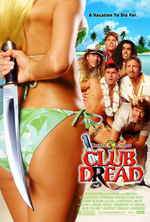 ...but this one was terrible...atties (Kevin Smith, Seth Rogen and Zach Galifianakis), bombshells sporting T-shirts that read YOU CAN HIT THIS IF YOU LIKE STAR WARS (among them Elizabeth Banks and her ten clones -- you finally realize how she can possibly star in so many movies at once), Andy from The Office (you still don't know his name), anonymous theatergoers (laughing eerily even in the silence, proof they don't need actual jokes) and Michael Moore trying to conceal his RED ONE in the darkness.

"This is... supposed to be funny," you realize. "This is a parody of an interrogation scene."

Yes, but Chandrasekhar hasn't had his Coors today and with an unsteady hand, the blade penetrates your eyeball. You can no longer see from your right eye. You feel blood and plasma dripping down your cheek. The crowd is still laughing, harder now; it's not them 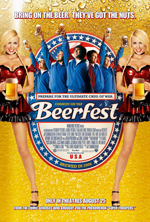 You have what Dr. Ayers used to call a moment of clarity: "I'm a character in a movie!"

But this is real. The pain is real.

"Isn't this funny?! Isn't this a cuntfuckdoodlygoddamn riot?!" Chandrasekhar yells.

"My eye..." you whimper, before he jabs his blade into your shoulder. The chorus of laughter is louder.

"They're laughing! You are entertaining them!" He begins sawing, the dull and rusty Ka-Bar chewing through tendon and gristle.

"Are you not entertained? ARE YOU NOT ENTERTAINED?!" 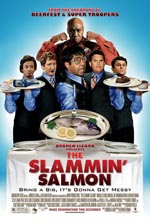 ...and this one? Likely the worst.

The crowd explodes with laughter as they collectively get the reference. However, you are not laughing. You feel dizzy.

"I'm not a construct," you protest, consciousness growing thin.

Chandrasekhar tosses your arm to Kevin Smith, who begins gnawing on it ravenously.

"No good movie without a dick joke!" Chandrasekhar exclaims. You feel his heavy hands unbuttoning your trousers. "And some sexual stimulation!"

"But that was my internal monologue..." you respond in softened consonants.

"Yes, but you have a voiceover! Your entire life, you've never been speaking!" 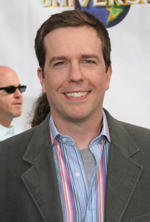 WHO IS THIS GUY?!And the realization hits you: He's right. All your life you thought you were speaking, but it was really a speaker cleverly hidden across the room announcing your stream of consciousness to the world surrounding. Before you can delight in the magic of your epiphany, Chandrasekhar is at it again, now detaching your erect penis from your increasingly flaccid body.

Chandrasekhar offers it to Seth Rogen, who waves his hands in an animated fashion and says in his congenial mumble, "No thanks, I'm on a diet."

He tosses it to Michael Moore instead.

It's the last thing you remember, thinking, "This is the way Michael Scott must feel after every take."

And shortly after you slip into unconsciousness, we cut to Jim in the break room, making a short quip that reverses our understanding of the entire scenario: You really were just a character in someone else's movie!