Every year I pray for only one gift and every year the powers that be shoot me down. It is not a malicious wish, even if it is a bit self-serving: I simply want my mom to fall into a temporary, but impenetrable, coma for about two weeks leading up to my birthday.

Let me explain: My mother is insane. Not "cute" insane. Not "collects Boyd's Bears and puts them around the house" insane. Although she is a completely rational person in every other way, she is simply incapable of giving me a gift that makes one bit of sense.

This is not the whining of a spoiled kid. At this point in my life, if I went to my mother's house and opened up a package that contained some socks and a Wal-Mart gift card, I would be ecstatic. It would mean that God, after years of ignoring me and basically finding ways to annoy me on an everyday basis, was finally listening to me. Either that or my father, who has not received any of the bizarre gifts himself but can still sympathize, started spiking mom's morning Frusion with Prozac. Either way, I'm not too picky.

To prove my point, I have collected the worst of these gifts from over the years and taken pictures of them for you, the reader. Maybe you're a terrible gift giver and would like some hints on what not to do. Maybe you're the recipient of some insane gifts yourself and would like a shoulder to cry on. Maybe you stopped reading this piece a paragraph ago and decided to send me a shitty email about not doing enough research.

Well, if you're a member of the first two parties, keep reading to learn a valuable lesson. And if you belong to the third group, please remember that "faggot" is spelled with two G's and one O. 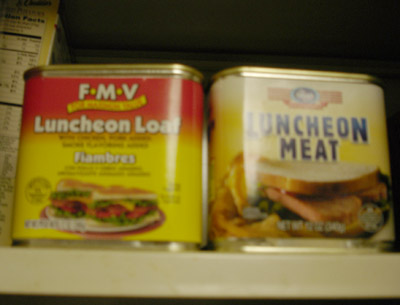 Canned meat was, of course, made popular by fellow Indiana native David Letterman, whose early career consisted of "doing unfunny things" and "doing unfunny things while dropping canned meats off of buildings." Until that point hardly anyone had heard of things like "luncheon loaf," and undoubtedly nobody had eaten one – at the time Vienna sausages ruled the congealed fat in a tin can market.

Even after that spike in popularity, canned meats were still not considered an appropriate birthday gift. My mother, the trendsetter that she is, set out to change that. One year, along with some video games and – you guessed it – a Wal-Mart gift card, I found a shining star wrapped in tissue and ribbon. A salty but nutritious star that, to this day, sits in my pantry to remind me of mom’s gradual descent into insanity. That’s right: It wasn’t really a star. It was two cans of some sort of loaf.

In some cases, a canned meat very well may be a thoughtful gift. For instance, if you’re the type of person who eats canned ham. If you were a subscriber to Luncheon Loaf Fancy you might jump with glee if you opened this sort of present. However, I ask you to bear these things in mind:

Still, since it was from my mother, I smiled and thanked her for such a great gift. To this day when she comes to visit I have to hide the meat, lest she discover the horrible truth.

Three Shot Glasses With "X" Printed On Them 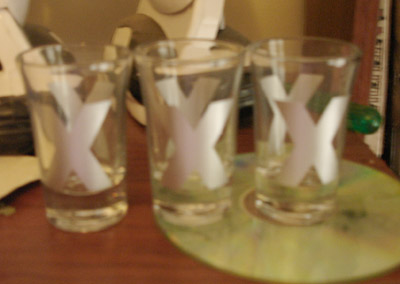 Maybe if a person was on a number of psychotropic drugs he could justify a canned ham as a gift. "It’s free food," he might say, "and besides, I’m a raving psychopath." However, when a person’s mother gives him three shot glasses that could be considered vaguely dirty, especially when said person has never been a big drinker, there’s no argument that something is wrong.

My mom has never been a drinker, and she knows that I am not a huge fan of it myself. I can’t drink beer since, to me, it tastes like a charming combination of gutter water and urine, and liquor only works for me if I feel like spending the evening crying apologies to the toilet for puking in it.

I guess my main question is the same I ask about other presents she gets me: Where the hell did she even find these things? What would convince my mother, a sweet, middle-aged woman, to venture into a store where they sell shot glasses like these? I would assume that, if she did venture in that kind of shop, she would at leat have the good sense to come back with a bong or a package of those all-hemp Zig-Zags. At least that would explain why the hell she thought these would be a good gift.

Oh, and the final factor behind my questions: I had just turned seventeen at the time and she often lectured me on the dangers of underage drinking. Go figure. 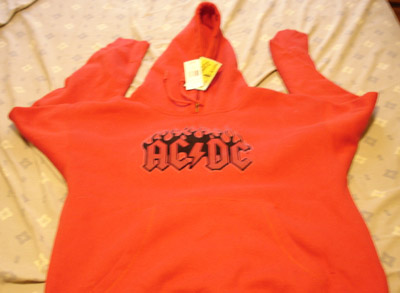 I am formulating a theory that this is not really a sweater. Instead, I'm pretty sure it's actually a tent tarp or maybe one of those flotation devices you're supposed to use if you're in a plane wreck.

The thing is huge. Not "I got it baggy since everyone puts on weight in the winter" huge, either. It is massive-huge and undoubtedly took the third-world sweatshop kid that made it twelve man-hours just to embroider the AC/DC logo on the front of it. This is the kind of thing a morbidly obese person hangs on his wall to warn himself what will happen if he keeps overeating.

I mean, I'm not a music snob. I listen to all kinds of terrible stuff. One time I divulged my musical tastes to Your Band Sucks author Dr. David Thorpe and he fell into a stroke-like convulsion that he hasn't recovered from to this day. But I'm not an AC/DC fan, and I think that's still something to be proud of.

The AC/DC logo is so prominent across the front I am sure it would lead people to make false assumptions about me if I ever wore it. Maybe they would think I drive a Trans-Am to my job at the factory. They could possibly assume I use food stamps to buy cartons of Marlboro Reds. Still, they probably wouldn't want to look at me too long, since it's a commonly-known fact that AC/DC fans are pure-bred asskickers.

The shirt is even more strange because my mother has absolutely no idea about the music I listen to. There are innumerable bands making music today: Maybe, like some bizarre, slightly more painful game of Russian Roulette, she just picked a band at random and hoped I liked them. Hopefully next year, if she decides to buy me another shirt I will never ever wear, it will be from a more universally-liked musical act. Possibly Don Henley or Fleetwood Mac.

A Picture With a Bunch of Cats Walking Into the Sun 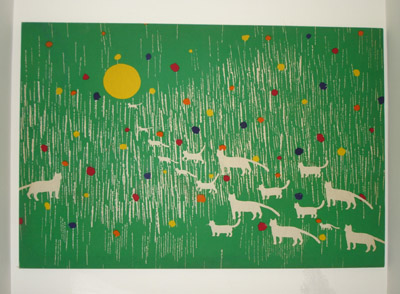 Why would anyone want this painting?

I mean, seriously, just fucking look at it. It's got some cats. Ok. They're all different sizes and they're walking into the Sun. Alright. Apparently they are walking into the sun because they are being unfairly persecuted by white slashes and multicolored dots. Mmm-hm.

The best I can figure is that this present was actually a charitable gift for someone else. I would assume my mother, the philanthropist that she is, met a starving artist on the street and gave him enough money to satiate his raging crack habit in return for this print.

My real question is this: If she did not buy this art from a drug addict, exactly where did she get it? I am fairly certain no retail shop would pawn off this kind of work, and even a business like Goodwill would have trouble stomaching the guilt they'd feel for selling it.

So, much like a war-scarred Vietnam soldier rustling through thick brush, I’ll walk into my mom’s house in a few weeks with a dual sense of wonder and horror. I’ll play a game of Gift Russian Roulette, one where I don’t know if the next package will be a book or a transmission assembly kit for an ’89 Topaz. Who knows? Maybe this will be the year she finally snaps and I’ll find some sort of endangered rain forest animal in a gift bag.

But whatever the case, I will be sure to come as prepared as possible. My numerous birthdays have bestowed me a certain right only age can give: The right to carry a concealed firearm. Also the right to legally drink. Between these two things I should be able to handle whatever comes out of that bag. I hope.

Forums user "Atomo" has given us access to his upcoming blockbuster "SILLY BABY." Also, there's something there about movie reviews I think. Either way you should read it.