In the first part of "Surviving Disney World," we covered the basic fundamentals fueling the average Disney World vacation: losing lots of money while praying for your own death. Today's conclusion pretty much says the same thing, only I talk about poop a lot more.

What should I bring on my trip to Disney World? 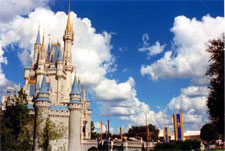 Disney World. NOT SHOWN: the Sears Tower, Statue of Liberty.Disney World is quite expensive, so you should make absolutely certain to bring all of the money. If you lack access to all of the money, you must locate somebody who appears capable of giving you all of the money (a banker, some fancy guy wearing a monocle, etc). Simply tell them, "give me all of the money." You may murder them if they refuse to comply; I recently received a newsletter from Ron Paul proving this is protected by the Constitution.

Now some of the delusional Disney Drones who spend all day violently arguing on forums about roller coasters and Minnie Mouse's menstruation dates may try to trick you into believing an affordable Disney World vacation exists. They'll undoubtedly bitch and moan and whine about this update, claiming it's full of lies and misinformation. They may even go so far as to copy and paste a bunch of boring words to conclusively "prove" me wrong. You know what other group of people waste their free time talking in detail about children's activities? That's right: pedophiles.

1) Unsupervised oxen ride for one person to Orlando (customer must supply their own bullets and extra wagon wheels)
2) Hotel accommodations provided by the storage shed of Disney's Magical Water Treatment facility, which is exactly like a normal water treatment facility except when you flush the toilet it kind of makes a sound like an old man being attacked by an owl.
3) Meals dubbed "all you can catch," which begin once you're shoved off the back of a raft.
4) Tickets to Magic Kingdom, Epcot Center, and all other major theme parks, consisting of a piece of paper somebody used to scrawl the phrase "LET ME IN."

Once you have obtained all of the money, don't forget to bring your family along with you. After all, this entire "vacation" is for them, not you! Make a mental note to repeatedly remind them of this so they can fully appreciate your selfless sacrifice through comments such as, "I sure hope YOU FAMILY MEMBERS are enjoying your vacation here IN DISNEY WORLD, a location I would otherwise absolutely never ever visit even if somebody threatened TO MURDER EACH AND EVERY ONE OF YOU UNTIL YOU ARE DEAD." Cross your arms, smile smugly, and simply wait for the compliments to flow in. They might even request your autograph.

These old guys will alienate you until you are forced to buy ice cream.Another important reason to transport your entire family lies in the inherent role of the father in relation to his child. If you happen to be a man (or at least possess the basic male reproductive parts like myself), a wife or lady-friend is required for at least one critical process: climbing into the shower and removing all the Mickey Mouse caramel and fudge from your kid's hair. Our daughter, who is nearly three, has grown to precisely balls-eye level, meaning my wiener would be flopping around in her face if I were to ever shower with her. Sure I could wear a swimming suit, but then I'd feel like the fat kid in high school gym class ashamed of his saggy ham man-tits. Disney World is the place where dreams come true, not the place where children get hit in the eye with dicks.