The Ingredients for a Downriver BBQ 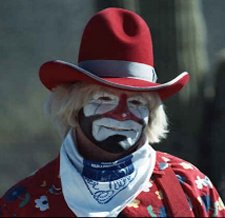 I want to tell you all about a very magical place located in my hometown of Detroit called "Downriver". It is located in the southern part of the city, hence the name "Downriver", and is special in the regard that it's actually a wormhole to some backwoods city in the deep south. Most of the Downriver residents are white, blue-collar workers who look like they just ambled out of a Jerry Springer episode, still groggy from the flurry of punches from their half-sister fiancé who they cheated on with a neighbor's garden hose. Here NASCAR is the official religion, and the streets are thick with guys sporting mullets in fired up, red Ford trucks blasting Lynard Skynard. The neighborhoods are populated with old, dilapidated houses with overgrown lawns full of cinder blocks and headless dolls floating in rusty water barrels. Patriotism in these parts run rampant, as well as various forms of STDs. When driving through a Downriver area, it's not uncommon to see two full grown men in Dio concert shirts fighting over a squealing hog, while a old woman runs in circles shedding food stamps like a blustery chicken.

Now I'm not trying to be down on poor folk for I myself didn't grow up as a privileged child, but poverty seems to be a prevalent side effect to the redneck lifestyle. Scientists are still puzzled over whether poverty breeds the hick, or if it's the hick who spends all his savings on satellite TV and cases of Bud that makes him poor. We might never know. All I know for sure about Downriver is that it's a white-trash breeding ground, and yours truly was lucky enough to be invited to a BBQ in the heart of this dark territory last week. It was there that I was witness to all of these stereotypes, which proved to be 100% accurate. I watched with fascination and horror as the ingredients for a true to life hillbilly hoe-down were unveiled before me in this grand spectacle of genetic failure.

BBQ Site: Ratty old house next to a railyard.
When I accepted the invitation to this BBQ though a friend of a friend, I had no idea what I was getting myself into. I figured it would be a simple affair with a bunch of younger people hanging out, eating some hamburgers, and drinking some cold brew. When I found out it was Downriver, my heart skipped a beat and I was reminded of the stories my dad used to tell me about his Downriver co-workers that brought raccoon meat in for lunch, and missed work because they got high on coke and rode their cars on train tracks thinking they were a choo-choo. I was close to backing out, but my morbid curiosity got the best of me.

I foolishly arrived on time and was the first one at the house. The house was squalid and the lawn badly in need of a cut. A grill was stacked on top of a few cinder blocks and the coolers and bowls of snacks were set on a picnic table. I quickly went about my business of getting drunk to dull the pain I knew was to come, and swatted the hordes of mosquitoes off my legs as the 4:00 freight train roared past the house. With enough beer and good food in me, I thought that I might be overreacting and that everything was going to be okay after all. Like always, I was wrong . 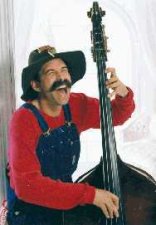 Ben Stiller on the banjo, and every single movie that comes out this summer.

Crazy old grandma who talks to elves.
The hostess' grandmother showed up next bearing what looked like to be a form of Jell-O snack. I was hoping that she was just there to drop off some supplies and leave, but no, she was there for the long haul. I already have a great distrust for old people, because they look strange and can cast spells, but this lady was also totally crazy. The worst part is that I was left alone with her for what seemed like an enternity while the others got the supplies ready in the kichen. The old coot looked at me and started talking about the Germans, and how when she was a girl a soda pop would cost a nickel, and then she went to talk to some clouds about the coffee she drank that morning. I took out my cell phone and pretended I was doing something while she rattled on about her feet and the communist menace. It totally killed my buzz.

Bleached blonde bimbo that chain smokes and has 6.5 children.
Thankfully a few more people arrived to save me from the withered crone babbling nonsensically in my ear. I conversed for a little bit and started working on building my buzz back into a respectable state. Then a caravan of pure Downriver showed up just in time to kill it again. It consisted of a bleached blonde woman who was probably in her late 20's but looked 40, and a gaggle of dirty children. She constantly had a cigarette dangling from her permanant scowl, and screamed at her children with a raspy pre-cancer voice. She shot me a look of distrust seeing as I was an outsider due to my lack of mustache or clothing items bearing the American flag. While her grubby children ran around causing mayhem, and her young baby wailed in a stroller, she started the grill up and threw some hot dogs and hamburgers on. Normally I can never refuse grilled meat, but the atmosphere and the sight of her cigarette dangling over the food was enough to eradicate my hunger. I stuck to drinking beer and clasping my rosary in my pocket; praying for a quick and painless death. 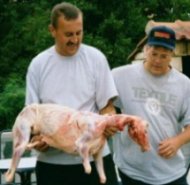 "Hey Cecil I found this thing in a meteor crater, lets grill it!"

Dude with huge gut, tye-dyed shirt with eagle, and pube mustache.
Just as the food started to catch fire because the blonde mother was too busy shouting at her kids to tend to the grill, a new guest arrived on the scene. This man was the original Downriver male prototype and ever since his conception, thousands were made in his image. He was wearing a tye-dyed blue and purple t-shirt decorated with a large eagle boldly staring out from his impressive beer gut. He also wore a trucker hat with an American flag, wore Oakley sunglasses and sported the patented fuzzy pube mustache. Cluched firmly in his hand was a can of Bud that he downed with gusto as he leaned back against the chain link fence and surveyed his surroundings, scanning for a potential mate for a night of clumsy, blubbery, drunken sex. While I was greatly entertained by this rare opportunity to witness a real live redneck BBQ, my soul felt sick, and the screaming children and grandmother who was talking to communist elves started to give me a massive headache. Well it couldn't get any worse. Right?

Music Selection: Kid Rock and Ted Nugent.
To try to drown out the sounds of trains and wailing babies, a CD player was produced to play some tunes. I knew something was missing from the atmosphere and it was made painfully obvious once I heard Kid Rock, the patron saint of redneck Detroit, blast out of the radio. Of course the CD started to skip, so this was replaced with good old Ted Nugent. This fueled the BBQ to get a little more crazy, as a mixture of the song, beer, and bugs prepared us to join Fred Bear in the big hunt up in heaven. That's assuming that you can kill animals in heaven with bows and guns. Hopefully they won't be hippie fags about it.

Neighbor troll in superhero sweat suit with dangerously obese dog.
I first spotted the supertroll walking an obese dog near the train tracks to the right of the house. By now I was getting to be fairly intoxicated and stricken with a terrible headache, so I thought that I must be seeing things. I spoketh "Is it a bird, is it a plane? No, it's a horribly fat butterwench crammed into a red and blue sweat suit. Is she wearing a cape?!" What topped the entire look off were her cornrows. Cornrows already look horrible on white people, but being lumpy and ugly doesn't help either. I almost felt guilty for being so critical of such a specimen, but then she started to trot after her poor fat dog and I threw up in my mouth a little. Later she walked over the chain link fence and hovered, probably waiting for a scrap of food, but to no avail. I shielded my eyes to guard against any more cognitive damage until she waddled inside and ate bouillon cubes.

I fled the scene before the cops or fire department could show up, and spent the rest of the night laying in a dark room and whimpering. The event was as troubling as the time I wasted an entire village of women and children during a tour of Vietnam. At least I survived the BBQ mostly intact, nursed my headache with a cold pack, and sat down for to watch Maurey Povich console some fat kid. If anything, it made a somewhat interesting tale of the secret world of Downriver. I hope you enjoyed it, or at least learned a little something about the white trash in all of us. I eagerly await a lawsuit from Jeff Foxworthy and the ghost of Boxcar Willie. 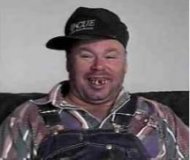 We have angered the Gods with our rigorous inbreeding program.

The doomed children of future Downriver.
About this time, the old otter was getting a basketful of trouble down by the old creek, Kodak the bear got himself in a pickle trying to get a beehive out of old man willow, and Grizzly Adams was doing coke lines off a dead Injuin's back. Oh wait, that was an episode of Grizzly Adams I was watching on PBS a few days ago. The BBQ, much like Adams, was in full swing and getting uglier by the minute. The children were malnourished hellbeasts who like to run around, scream, and break things. They were adorned with fake tattoos that are preparing them for real ones very soon. One of the kids was much older, and had to be around 15, which means the blonde woman probably had him when she was 15.

This boy was the biggest trouble maker and was consuming alcohol, stealing things from the house, and somehow managed to get on the roof. The mother and grandmother screamed for him to get down as a train roared past, Ted Nugent was blaring on the radio, and the obese dog was barking. The hostess was so upset that a fight erupted between her and the 15 year old brat, and the eagle shirt guy tried to break it up but fell over a cooler because he drank a case of beer, and the grandmother screamed to the heavens at invisible unicorns and ran away, knocking over the grill onto the overgrown grass. I laughed and fell out of my lawn chair totally drunk and insane. And with that, the Downriver BBQ came to a close.