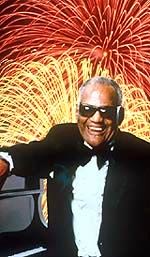 Ray Charles, seen here alive and being tormented by fireworks he cannot see.It was a cold January day in 2002 when I penned my second article for Something Awful. Like the rest of my first hundred or so attempts at writing articles, it was terribly unfunny, painful, and embarrassing to just about everybody in the Milky Way. That article was on the subject of fear, in particular, my fear of one day accidentally killing Ray Charles. At the time, the people masochistic enough to read it said I was suffering from an irrational fear. Well, two years and some change have passed, and Ray Charles has legitimately dropped dead. Not by my hands, though, at least not directly. According to sources I refuse to cite because I have no journalistic integrity whatsoever, Charles passed away after a battle with liver disease that may or may not have involved giant robots and the destruction of Neo-Tokyo. At the same time I was lamenting on my fear of accidentally killing a popular entertainer under the assumption that I was protecting the world from rogue mummies, I also mentioned that Bob Hope should probably die. Since writing that article, Bob Hope has come to agree with me. Last Halloween, I wrote that President Reagan was actually a hologram. The off switch on his illusionary existence has since been turned. All this adds up to one horrible fact: it appears I have the power to kill people with my very words. Anybody, and thusly everybody, I have ever written about is destined to die within two and a half years of me mentioning them. I apologize.

I can't tell you how awful I feel knowing that I've doomed a lot of people, such as Larry King, Don Knotts, Bea Arthur, Wil Wheaton, Pope John Paul II, Darryl Strawberry, Shaq (and possibly the entire ancient Shaq-fu martial arts discipline), Chuck Norris, several astronauts, and Louis Anderson, to die at the hands of my mysterious curse, which, to be honest, probably doesn't actually have hands. That's just to name a few. There will be hundreds of others, like Marc Singer from "The Beastmaster" and both Burt Reynolds and Burt Ward. I'm pretty sure I never mentioned Craig T. Nelson, so he's in the clear. Well, up until now anyway. Also, you can look forward to this site either shutting down, or ending up in someone else's hands because everybody who writes here is as good as dead, with the possible exception of a lot of those State Og guys. After two years I still have no clue who they are or what it is they keep on writing about, but bless their tenacious little souls regardless. Oh, and Ben "Grasnin" Platt is probably immune, since I doubt even my curse would really invest the time necessary to find and kill him. 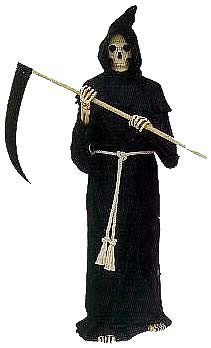 Hello good sir!The implications of my powers are far reaching, like the hands of Plastic Man and Reed Richard's secret crossover lovechild. Do my powers extend to comics as well? If so, look for those two characters to die in upcoming issues of their respective comics. Some of you may note that I have written about politics and therefore mentioned our various world leaders. I feel particularly sad knowing that I all but doomed the rulers of the island kingdom of Tonga, a place I enjoy very much when my Something Awful business travels grant me the pleasure of a visit. I do not know if the Secret Service can protect against strange and paranormal curses, but I hope so for the sake of our consistency of government. If not, there may be no one left to lead us, except for Craig T. Nelson. Oops, scratch that. I would also apologize to our world neighbors, because I never meant to destabilize your countries. In retrospect, I sure was showboating when I wrote that update listing all the current world leaders and their home countries. And I certainly didn't do anyone any favors when I wrote that article listing my favorite disabled orphans in reverse alphabetical order. The point being, more and more people are going to start dropping dead very soon and there isn't anything we can do about it. 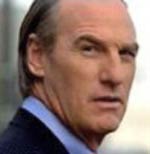 Gosh, I'm sorry.As you might imagine, this is quite a burden that I'm carrying on my wide, childbearing shoulders. I can't say it was a goal of mine to bring death and suffering to the world, but since I never asked for this I don't feel all that guilty. Okay, a little guilty, since I went out of my way to kill Craig T. Nelson. Sorry about that. I feel like I have to make a special effort from now on to not specifically mention anybody by name, such as I did with Craig T. Nelson, because the mere act would be akin to manslaughter. Instead of being personable I will have to settle on a lot of indiscriminate descriptions of people and hope that you readers can fill in the blanks correctly. If anything, that would probably give my terrible writing a timeless quality. People in the future would think I'm talking about people they can relate to, and by that I mean other people from the future. But needless to say, I'm going to be awfully responsible now since I don't want to harm the world anymore than I already have.

There are positives to this whole ordeal, though. I have mentioned Celine Dion on occasion, so we can look forward to an end to her reign of terror and to her eardrum holocaust. In the off chance my powers make dead people come back to life, we can look forward to the resurrection of such men as former presidents Eisenhower, Lincoln, and at least one Roosevelt, as well as Ray Combs, Vincent Price, and Norman Fell. I unfortunately mentioned L. Ron Hubbard as well, but then he was already scheduled for a 2007 resurrection. Apologies for bringing back Hitler, Stalin, Lenin, Pol Pot and Idi Amin, but I can just write about them again once they return in zombie form. Perhaps we can even have the formerly dead presidents take them on in a sudden death charity soccer match. In the end, the smiles garnered from a game like that would be enough to make us forget the tears and sorrow of losing so many people in such a senseless way.

Please don't hate me for my strange powers, instead respect and fear me. I don't want to write an article about your upcoming death, or worse, the upcoming death of your loved ones. But I'd be glad to write about the adoring fans humble enough to pay me routine tribute in the form of cotton candy and trips to the cockfighting arenas I love so much. We can learn to live together, you and I, so let's do that.

Summer is here, and that means action packed blockbusters to titilate the senses and shut the mind the hell up for a while. Sadly, in the service of duty, I, Ben "Greasnin" Platt, will find none of that as I take a look at the film "Junior." No, not the Arnold Schwarzenegger pregnancy romp, but a horrendous Dutch horror flick by the same name.

Making incredibly shitty horror movies has traditionally been a primarily American undertaking. And, like everything America does, I think we do it the best. But it is an ignorant man who turns a blind eye to the shitty movies from other nationalities. We typically think of the Dutch as a pleasant, mellow, good-natured, clog-bearing people who live in windmills. Marc Ickx set out to change that impression, as well as the impression that vowels are a necessity. To that end, he hired himself a cast and put together the film we lovingly call "Junior," a movie destined to show the world that when you're thinking of cinematic excrement, don't forget to look at Holland.

Why go out to the movies? Stay in and read the review of a movie I rented! It's the closest thing to being an inanimate object!