Somebody Has to Stop Adam Sandler 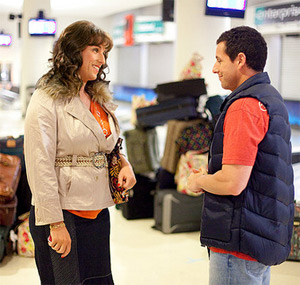 You have a dog. Nothing fancy, just something big and dumb and goofy. It used to be a lot of fun, but it's getting older and doesn't play fetch. You've both sort of moved on in different directions over the years. One day you notice your dog has a black growth on its lip. You tell yourself you're going to get it checked out and maybe it will take care of itself anyway. Years go by. The growth keeps getting bigger and bigger. In fact, the bigger it gets, the more you avoid doing anything about it. Surely this dog is just going to drop dead form the growth, you tell yourself.

Then one day you come home from work and the dog is waiting for you. Only it's not a dog anymore. It's nothing but the growth. Your old dog is gone and in its place is a black, pulsating, malignancy. And it's hanging out with David Spade.

Why didn't you put it to sleep when you had the chance? Now it's like the Akira monster and spreading all over your house making Kevin James vehicles and family comedies for the holidays. If you try to kill it you'll only make it stronger.

Adam Sandler has never been the creative force behind a good movie. In the mid-1990s he made a few funny movies. Billy Madison and Happy Gilmore were briefly hilarious. That, and a string of SNL characters that became grating almost instantly, is the legacy he established early in his career. Somehow in this time period he amassed enough money to do whatever he wants and what Adam Sandler wants is to punish the United States of America. Even if you don't see any of his terrible movies you will have them rubbed in your face every time you turn on the TV.

Let's look at some of the films he has recently inflicted upon America:

Adam Sandler pretends to be married to Jeniffer Aniston to woo some sort of wooden dress doll. Jennifer Aniston has the sex appeal of a fat guy's body soil and shares the chemistry with Adam Sandler and a couple kids that should be driven over by a truck. 64% of Rotten Tomatoes voters are chemically-lobotomized sex offenders, so no surprise it snagged such a high audience rating.

All of the people you wish had died after leaving Saturday Night Live and Chris Rock have made a movie. Adam Sandler got all his buddies together and released a formulaic, aging guys movie with a heavy dose of "Hard PG" raunchy slapstick. This is possibly the worst major film released in 2010. If you see this pop up on Netflix Instant and you're looking for laughs, you will have better luck with The Civil War by Ken Burns.

That brings us to Sandler's latest and most appalling creation.

Seeing this movie's trailer and wanting to kill yourself to escape this shitty world is the equivalent of a Turing test. A machine will stare unfeeling at the horror unfolding before its receptrons, but a human wants to escape the agony to a place of peace where Jack and Jill can never touch him. We don't just get Adam Sandler, we get him twice and he's playing off himself for an entire movie. You see, one half of Adam Sandler is a scenery-chewing sub-humanoid you will almost instantly want to see dropped into a quarry and the other half is his sister. I hope you're ready for 88 minutes of self-flagellation followed by a grotesquely earnest lesson about the importance of family. We fucking get it, Adam Sandler, you love your kids and your family and your Zohans.