My Interview with Jordan Peterson

Jordan Peterson has grown into a lightning rod of controversy lately, his "no-holds-barred" approach to speaking and voicing his controversial opinions both resonating and riling up people across the globe. An esteemed professor of psychology-turned author and Youtube star, his unique outlook on life, encouraging various forms of "masculinity" while blaming society's ills on feminism's rise, has made him a figurehead of many disenfranchised males who believe society has progressively demeaned them into victimization. I was lucky enough to sit down with the good doctor, and learn more about his unique thought process and belief system. 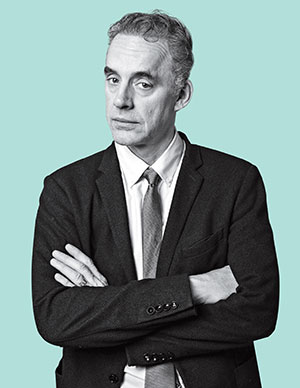 "I see you've noticed my extensive art collection," Peterson dryly observes as he catches me examining one of the countless displays covering each wall. "That one you're looking at there? Worth millions. The canvas was actually created by stitching thousands of labias together. Not sure how the artist obtained them or why, but I feel it reflects something primal in me." The painting itself depicts a crudely drawn barbarian, with nine women chained to his ankle, raising an impossibly large sword against a gigantic, threatening dragon wearing a long, golden haired wig. A speech bubble reading, "I'm gonna KILL YOU, DARGON [sic]" appears scrawled in crayon above the warrior's head. "I can sympathize with this brave warrior's fight," Peterson continued. "Chained down to the earth by women while trying to do his duties as a man. It's what we've become as a society."

Peterson's persona can only be described as "serious." "I have not smiled in over four decades," he admits. And the time he actually did experience a moment of happiness over forty years ago? "It was when my mother died. She fell into the subway tracks after I pushed her into the subway tracks. She died immediately. But when you think about it, one could claim it's poetic justice in a sense. Here you have an unstoppable object crushing her beneath it, and that's essentially my purpose here on earth, except instead of crushing my mother, I'm crushing the infectious concept of feminism."

Over 1.1 million subscribers enjoy his online presentations, ranging from "Women: Dumb Bitches Who Should Die Because Men Are Better," to the most popular video of his, "Women: Stupid Whores Who Don't Deserve to Live Because Men Should Kill Them Until They Die." His motivational speeches encourage a unique form of masculinity, one that relies on the theory of women ruining everything they touch due to their inherent ability to be nothing but stupid, vapid, useless sluts.

"In this age and time, men have nearly no rights," Peterson explained to me. "We cannot be served in restaurants. We cannot legally drive cars. We are routinely shot at by police helicopters if we are seen breaking our 8:00 PM curfew.. This is why society is decaying and now, more than ever, needs men who can be men." 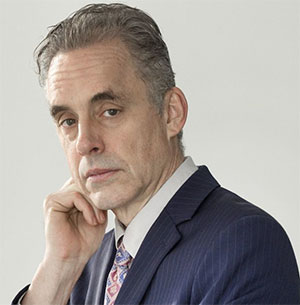 But what does "being a man" entail to Peterson? "Let me give you an analogy. Hundreds of years ago, there were pirates, They were primarily men, and they banded together to fight the Kraken. Now they would dock in Atlantis, and Neptune, the king of Atlantis who had the Little Mermaid as his daughter, would praise them for their efforts. He would allow the sailors to run a train on Ariel, as he secretly watched and filmed the entire thing from behind curtains. But then the sirens heard of this, and they invented the Bermuda Triangle, which, if you look at it on a map, appears to exactly resemble a woman's vagina. The Bermuda Triangle swallowed up Atlantis and everybody there, dooming them to a watery grave. Masculinity has been dead ever since."

When I pressed Peterson for more detail regarding Neptune and Atlantis, he changed the subject. "Look over there, where I am pointing," he demanded. I turned my head to see. "That's the direction I'm pointing," he triumphantly proclaimed.

"Many men are falsely accused and imprisoned due to crimes that a female in their life has actually committed," Peterson continued. "The so-called 'terrorist' who shot all the people in the dance club? His wife forced him to do that or else she would never have sex with him again. Do you remember that man named 'Hitler?' All his ideas, from the gassing of the Jews to the attempted world conquest, were written down in a small book by Eva Braun entitled, 'Hitler, I Won't Touch Your Dick Until You Do All These Things.' Men genetically cannot commit crime; they scientifically lack the crime DNA gene. So every man you see imprisoned, that's the direct work of a woman." When pressed for further details regarding Braun's book, he dismissed my questions by claiming "she probably made him eat it or something." 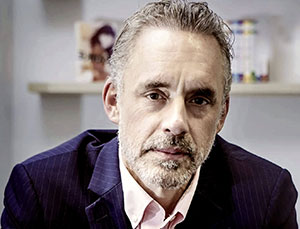 Peterson frequently repeats that his mission, his ultimate quest, is to "toughen up" young males so they do not fall under the destructive influence of feminism and women in general. "I had this student, I'll refer to him as 'Tim Baker' because that's the name he used before requesting anonymity. So anyway Tim had been told by, you guessed it, his mother, that it's polite to hold doors for women. That's the hellish indoctrination children these days are forced to go through. I brought Tim to a motel where I locked him inside a room for several weeks and helped him realize the hard truth, primarily by screaming a lot. Occasionally I placed a quilt over my head and attempted to convince him I was a scary ghost. Nearly one month later, I unlocked the door and Tim reentered the world as a true man. One with several broken bones, but nonetheless a true man. A few days later he approached me in my office and said, 'Jordan! Guess what! I was in a mall and a woman asked if I could hold the door for her! But instead of blindly following her outrageous demands, I slammed the door on her face and pushed it so she could not leave! Then when she tried to exit through another door, I held that one closed too! I tried to weld them shut, but the mall police came running out so I had to leave.' I was so proud."

While many of his theories and ideas match the popular "red pill" or "men's rights" belief systems that compose 99% of Reddit, Peterson takes things one step further by "exposing the harsh truths that even Reddit is afraid to admit."

"So I was in the grocery store, buying ramen, as it's the food that confuses me the least. Several harpies swept down from the skylight and began attacking me with their razor sharp talons. I had a sword so I valiantly fought them off, but that's when the bog hag appeared in the frozen fish aisle and began reciting her incantations. My head began to feel like I was underwater, incapable of performing masculine things such as cutting women off in traffic and telling females they're bitches. Fortunately I had my talisman of protection, an ancient ward passed down to me from generation to generation, and I overpowered her with my masculine magic. Then I called her a bitch. These are all real things that actually happened to me, and why I feel it's necessary to provide our male youth with the tools to deal with such events."

As the interview ended and Peterson walked me to his door, he pointed out another work of art proudly displayed in the entrance hallway. It resembled a mushroom cloud destroying an entire urban city. "That's the apocalypse. The name of that city is Womantown. They're all dead from being killed," he stated matter-of-factly. "I think it's cool, and good."