Between his provocative standup special, his provocative new show, and his provocative tweets, Ricky Gervais has a lot going on. That explains the recent flood of emails we've received from starstruck normal folk who have spotted the puckish celeb out in the wild.

Mr. Gervais stood at a lectern in the Westminster Reference Library, an enormous dictionary open before him. According to several accounts from library staff and visitors, he peered intently at a pair of pages containing a lengthy entry for the definition of "controversial" in oversized text.

"This will blow their minds," he was heard muttering to himself in delight, shaking his head and smiling devilishly. 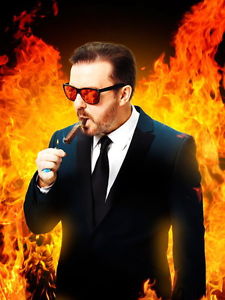 Gervais was seen circling Central Park for days, reading off a list of old-timey nationality slurs. When someone walked by without gasping in shock Mr. Gervais' entire body slumped inward in absolute defeat.

Gervais was heard in voice chat with a rowdy group of 13 year old white boys, giggling appreciatively at all their outbursts and audibly jotting down their every word in a spiral notepad for an upcoming project. On several occasions he asked whether the phrase "gay midget" or "tranny retard" was funnier.

Gervais asked numerous tourists to take pictures of him in front of the Leaning Tower of Pisa. As you might expect, in every picture he stood sideways with his hands out before him, creating the illusion that he was interacting with the building. However, instead of appearing to hold the tower up, he was PUSHING IT OVER!

One tourist noted that Gervais bragged about a nickname supposedly given to him by locals, La Scampa Brilliante.

Gervais made a VERY big deal out of purchasing a Blu Ray copy of PCU, holding it up like a jewel as he made a circuit around the entire store.

Mr. Gervais was seen exhibiting this exact behavior (including the above quote) in multiple stores around the world, purchasing PCU at least eighteen times within the last month. In every sighting he was puffing a fat nasty turd of a cigar, glancing around desperately hoping for someone to ask him to put it out.

Gervais sauntered into an English class wearing a pair of shades. He raised a hand and asked whether "couldn't care less" or "could care less" would be the correct phrase to demonstrate how little he cares about people who might be offended by his comedy, then flipped both middle fingers and left before the professor could answer.

Gervais stood in a packed coffee shop and held a newspaper up. He flapped the periodical loudly and cleared his throat before reciting a headline about Hawaiians fleeing from a volcano. Mr. Gervais shook his head and declared, "These people need to get over themselves."

"The victims. Bunch of babies."

Someone attempted to reach around him for a napkin.

"Oh, did I hurt your feelings? You think the freedom of speech doesn't apply to the people you disagree with?"

Spotted in a lamp shop:

Gervais rubbed each item in the store, whispering to any genies that might have been roused from their prisons. His one heartfelt wish repeated over and over: Controversy