Born and raised in New Jersey and very proud of it, this fact can be seen in all of Kevin Smith's movies.

And so starts the IMDB profile of Kevin Smith, one of America's most beloved filmmakers. Smith, known for such generation-defining pieces as "Clerks," "Mallrats," and "Jay and Silent Bob 3: Jay and Silent Bob Meet Mothra," is humble about his roots and everything from his dress to his media work reflects this.

Somethingawful.com celebrity reporter Evan "Pantsfish" Wade recently caught up with Smith during a promotional tour for his latest movie, "Clerks 2: We Still Hate Our Customers and it's Still Funny." Smith sat down for lunch with Wade and allowed him to tape record a conversation between the two. What follows are excerpts from a three-hour conversation with this master of modern cinema, reprinted with the director's permission, interlaced with biographical commentary. We only hope you enjoy reading as much as we enjoyed interviewing.

Although his early career is well-documented, Smith's young life is a substantial gray area, even to his biggest fans. While he is reluctant to divulge secrets of his past, a few things are known. 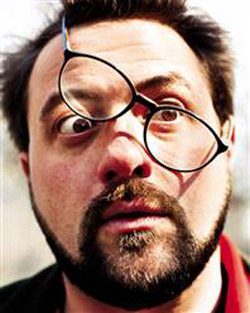 Smith is known for his down-to-earth dress style. He is so connected to his youth, for instance, that he wore a Bruins jersey to his mother's funeral.

Born on the second of August in 1970, Smith was quickly deemed an outcast by his peers. He was subjected to near-daily beatings by his manic-depressive, drunken, Asian father, Terrence "Crazy Fists" Smith. Terrence, a former Golden Gloves boxer, was a lifelong miner and often vented his job-related frustrations on his "fat fuck" son. Smith, who weighed nearly 200 pounds by the age of 10, struggled to find oversized clothing to cover the welts and bruises left in the aftermath. Later in his life Smith would discover a new sense of style but still stuck with baggy clothing, proving he is true to his roots.

"I took to taking the stakes out of tents and cutting arm and neck holes in them," Smith said. "People made fun of me for wearing a dress but they mocked me harder for having bruises over my varicose veins. They called it the lardo expressway."

Besides social problems, Smith also struggled with school from day one. Smith claims the problems came from "boredom, not a lack of wit," and his old report cards agree. While he did excel in the subjects he was interested in, such as Home Economics and Poetry, other subjects, such as Biology – and especially gym class – were very hard for him.

"I guess, I don’t know," Smith said, holding back tears. "To me, Home Ec. was about as close to a graded lunch period as you could get, you know? Poetry I've always been good at, sure. But to get paid to bake things? It's like asking Matt Damon to take a job smoking reefer all day."

And bake he did. It was at the 1979 Greater New Jersey Great Kids Bakeoff competition, in fact, that he met Matt Damon and his friend Ben Affleck, two friends who would have a positive effect on his life before and after the silver screen struck.

Damon, who was there to sample the contest's submissions, was immediately drawn to Smith. He introduced his good friend Affleck to the aspiring baker, and the three were inseparable from that day forward.

"Things really clicked," Smith said. "They liked to eat and I liked to cook and eat so it all worked out. Only when I won a video camera in the following year's bake-off did the bond truly form, though."

As they reached high school the three often skipped school together to film movies about daily annoyances that bothered them.

Ironically, it was because of a tragedy that Smith was catapulted into the limelight. Years of mining work took their toll on Smith's father, he died of black lung disease only three days after diagnosis. The mining company offered the elder Smith's family $10,000 each to avoid litigation, which the group happily accepted.

"I mean, I really hated the cocksucker anyway," Smith said. "It's bad to speak of the dead like that but it's true. I took that $10,000 and bought my first car, which got me my first job, which inspired my first movie. I think of it as the one good thing he ever did for me."

A Star is Born

Kevin Smith hated his job at the Quik Stop. Little did he know it would be the very thing that vaulted him into Hollywood superstardom and his work into critical acclaim. 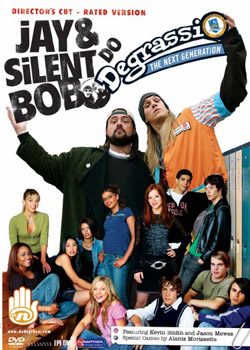 Besides his illustrious film career, Smith has been caught with his hand in television's proverbial cookie jar. Let's hope he didn't eat too many cookies!

"It was just an idea I was playing with," Smith said. "I mean here I had this fresh, original concept that nobody had ever thought of before. C'mon, jaded retail clerks who hate their customers? That was fucking innovation back then. Hell, it's still fresh today. And, you know, besides the fact that I was dealing with some groundbreaking material, the people it catered to wouldn't have much better to do than watch my movie two or three times on their days off."

And the plan worked beautifully. Given the success of "Clerks," Smith was soon greenlighted to start work on his next film, "Mallrats."

Of course, Smith's talent extends to the front of the camera, too. After stealing the show (along with cohort Jason Mewes) in "Clerks" as part of the Jay and Silent Bob dynamic, Smith decided to expand and deepen the two characters, assisting them into a pop culture phenomenon nearly as big as Smith himself.

And things just kept on growing from there.

"Listen," Smith said, "I'm not one to just let go of a good idea. I'm a big thrift-store shopper. Always have been. So when I went in looking for 32 XXL hockey jerseys and heard people cracking one of Silent Bob's few lines, or saying "Snoochie Boochies" before lighting up a joint in their cars with their infant children in the back, I noticed."

Smith applied his moviemaking philosophies to his real life and watched himself improve as an artist and a person.

"You know, things annoy me. I'm a rare type of humorist in that I like to complain about everyday irritants. Some people call it 'ranting,'" Smith said. "I just take those little slice-of-life annoyances and turn them into movies. It's a pretty fresh thing to do in comedy and there are lots of ideas to crank out. For instance, I recently finished writing a film about loud people talking loudly in theaters and how they're probably really slow drivers, too. Really fresh stuff, you know?"

The late 90's and early 2000's were not kind to Smith. After the box-office failure of "Mallrats" came flat-out bombs like "Chasing Amy," "Dogma," and "Jersey Girl." 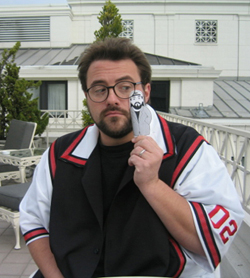 Smith also has a passion for creating paper dolls that look like him and his friends. Here he is with "Kevy," his latest work. It took him six months and three million dollars to complete.

Smith's connection to New Jersey is strong indeed. Smith says that, despite his father's vicious beatings, the oversized clothing helps him stay connected to his roots, no matter how big his trunk may grow.

It was those same Jersey roots that helped Smith mount a small comeback to Hollywood's bosom. Drawing from his old style, he decided to make a film specifically about his two most popular creations, Jay and Silent Bob. Using a simple "road trip" backdrop, Smith sent the Gen-X's Two Stooges into a crazy misadventure, making sure they met up with plenty of booze, boobs, and bongs along the way.

Still, for all the fun, production was taxing. Smith quickly grew exhausted from all the physical activity he had to undertake as Silent Bob, and that exhaustion quickly took a toll on his appetite. Midway through the film, Smith ballooned to over 500 pounds, forcing him to halt the movie's production for three months. However, after 90 days with "nothing but Dr. Atkins and Nintendo 64 to keep (him) busy," he was ready to return to his passion.

Only then was he notified that, during the hiatus, cohort Jason Mewes had become mentally retarded after overdosing on heroin.

"It wasn't a super-huge deal," Smith said. "I mean, before the overdose, Jason was actually pretty bright for a kid out of Jersey. I think at one point in high school he was even reading at a sixth-grade level, and that's pretty goddamn impressive for someone with his background. And, you know, he basically played a retard in my movies. After the overdose he was about as bright as most people from Jersey, so we just told him to act natural.

"You'll notice about half the movie he has a heroin needle sticking out from under his shirt sleeve."

While the film met limited box-office success, Smith is still confused as to why the movie wasn't bigger.

"Pot humor and monkeys, separate or together, will never cease to be hilarious," Smith said. "I think if I could effectively incorporate a dope-smoking ape into one of my films, I will have created a comedic plateau that only a few others will ever reach."

Even though his filmmaking fame has cooled off again, Smith, like always, is expanding laterally. He has branched into the realms of comics and television already, and if Kevin Smith knows about one thing, it's growing.

Take, for instance, his recent guest writing/acting gig on the popular teen program "Degrassi: The Next Generation." Smith played himself in the role, and got a chance to do what any former loser would do: Kiss the prettiest girl in the school.

"People have criticized me for that," he said. "But, you know, I think I'm still a high-schooler at heart. There's not one thing wrong with a guy my age kissing a beautiful woman, no matter how old she may be."

And now, with his wife (not to mention his young daughter, Harley Quinn – who was named after Smith's favorite Batman character), he is forging a new life for himself. Even if that new life means bearing criticism and doing what he loves: Making hilarious movies for interesting people.

"You know, some people have called me a tremendous douchebag for basically not trying to improve a good formula much," he said. "Some people think I'm just a massive dickweed because I tend to make everyday occurrences humorous. Shit, just the other day one guy called me an asshole because he said I ran the two only funny things I ever did into the ground. Then, after that, some other guy called me a pathetic nerd-faggot for naming my daughter after a comic book character.

"But you know what? Forget them. They can call me a douchebag or a dickweed. They can think I'm an asshole or a pathetic nerd-faggot. But the truth is, at the end of the day, they're pulling 9-5 lives like the characters in my movies. They'll go home to their one-bedroom apartment and I'll be in a mansion, getting my dick sucked by models while I lift weights. After that, I may go film an ESPN commercial. Whatever I do, it doesn't matter, because I am not what those guys called me. Especially a pathetic nerd-faggot."

Click here for some of my most controversial thoughts and opinions! Also some fake news from Robert "Closeknees" Smith! It's so exciting I need two exclamation points!!